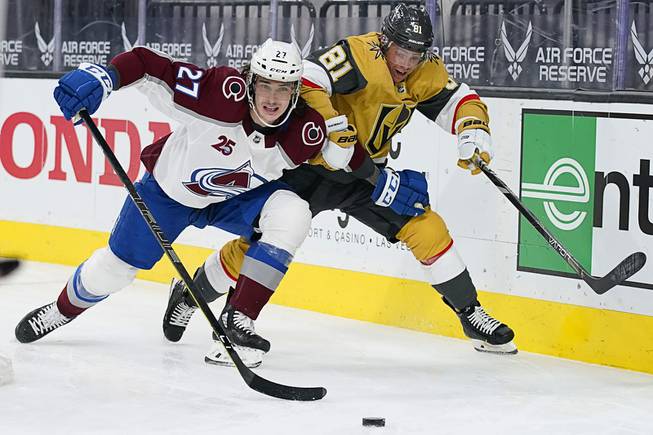 The Golden Knights will play Monday’s game against the Avalanche with 15 skaters — 10 forwards and five defensemen — playing with three fewer skaters than the maximum allowed, general manager Kelly McCrimmon announced before the game.

Krebs suffered a broken jaw in Saturday’s game, underwent surgery yesterday and is out “indefinitely,” McCrimmon said. Defenseman Alec Martinez is out Monday after playing Saturday, and the Golden Knights are still without forwards Max Pacioretty, Tomas Nosek and Ryan Reaves, who have all missed varying amounts of time with injuries.

Vegas played last week short one forward, opting for rookie Peyton Krebs over two cheaper forwards. Even on an entry-level contract, Krebs has a higher cap hit than players like Tomas Jurco and Dylan Sikura who have filled in for the Golden Knights at times this season.

Division title on line for Golden Knights in showdown with Avalanche

All that’s at stake tonight is the West Division title and home ice throughout the Stanley Cup Playoffs. Other than that, not much.

The Golden Knights can clinch their third division title in four years and their first Presidents’ Trophy with a victory against the Colorado Avalanche at T-Mobile Arena. With the playoffs right around the corner, a victory would give Vegas the top overall seed in the league. Puck drop is set for 7 p.m.

Vegas can eliminate any guesswork with a victory in any fashion. It would put the Avalanche too far behind the Golden Knights to catch them in Colorado’s final two games, as well as guarantee at least a tie atop the NHL standings with Carolina. Because Vegas has more regulation wins, the first tiebreaker, Vegas would win the Presidents’ Trophy.

A loss makes things interesting, depending on how Vegas loses. An overtime or shootout loss would give Vegas one point in the standings for 81 on the season with one game to go and give Colorado 78 points with two games to go. That means Vegas could still clinch with a victory over the San Jose Sharks in the regular season finale on Wednesday, even if the Avalanche win their final two games.

A regulation loss to Colorado tonight takes control of the West out of the Golden Knights’ hands. They would have 80 points with one game left and Colorado would have 78 with two games left. Because the Avalanche have the regulation wins tiebreaker over Vegas, if Colorado wins tonight in regulation then wins its final two games, the Avalanche will win the division, even if Vegas beats San Jose on Wednesday.

A Vegas loss tonight means Colorado would have to lose again this season, and Golden Knights don’t want to have to count on that happening.

“We’re getting to that time of year where every point is crucial,” defenseman Zach Whitecloud said. “Everyone knows what’s on the line and it’s a fun time of year.”

The Golden Knights did not hold an on-ice workout this morning, and coach Pete DeBoer all season has refused to name a starting goaltender before warmups. If Vegas holds to its every-other-game rotation between Marc-Andre Fleury and Robin Lehner, it would be Lehner’s turn in the rotation.

But it’s worth noting the last time the Golden Knights broke the rotation was in late March, when Fleury played consecutive games against Colorado. Fleury has started all seven games against the Avalanche this season.

“I’m not making those decisions based on one game,” DeBoer said. “We’ve gotten great goaltending all year from both guys, and we’re going to need both guys in the playoffs, too.”

The Golden Knights are 4-3-0 against the Avalanche this season, including a 2-1 mark at T-Mobile Arena. They last played on April 28 in Las Vegas, where Vegas won 5-2.

That Avalanche team wasn’t the same one the Golden Knights will see tonight. That team was missing leading goal-scorer Mikko Rantanen, forwards Brandon Saad and Joonas Donskoi, and goalie Philipp Grubauer. All except Saad are expected back tonight, and rookie Alex Newhook is expected to play Vegas for the first time, though defenseman Samuel Girard will not play.

On the Golden Knights side, DeBoer said there will be game-time decisions in regard to the availability of forwards Max Pacioretty and Ryan Reaves. He said there will be an update today on rookie Peyton Krebs, who took a slap shot to the face in the second period Saturday and did not return.