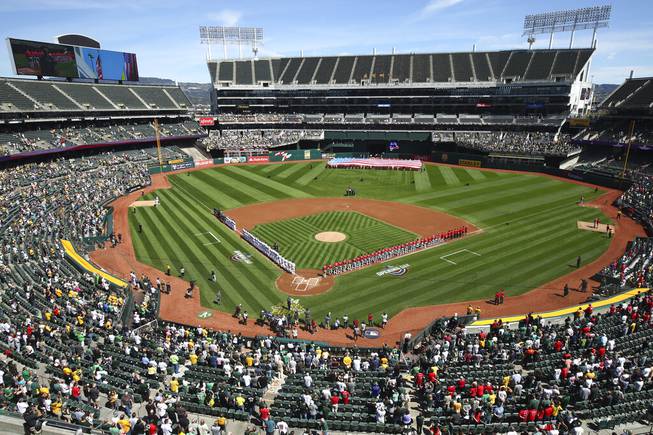 The Los Angeles Angels and Oakland Athletics stand for the national anthem at the Oakland Coliseum prior to an opening day baseball game in Oakland, Calif., in this Thursday, March 29, 2018, file photo.

Could Las Vegas be welcoming another major-league sports franchise soon?

If the Oakland Athletics can’t work out a new stadium deal in northern California, they will begin exploring options for relocating, ESPN reported on Tuesday. One of the potential landing spots at the top of the list: Las Vegas.

According to the report, the Athletics will have the support of Major League Baseball in their pursuit of a new permanent home. The team has been angling for a new stadium in Oakland for years, and with their current lease at the Oakland Coliseum set to expire after the 2024 season, time is running out to break ground on a new park.

Major League Baseball issued a statement declaring that if a new stadium is not secured in Oakland, the A’s will have to move.

“The Oakland Coliseum site is not a viable option for the future vision of baseball,” the statement read. “We have instructed the Athletics to begin to explore other markets while they continue to pursue a waterfront ballpark in Oakland. The Athletics need a new ballpark to remain competitive, so it is now in our best interest to also consider other markets.”

Las Vegas is viewed as a desirable market for the league, according to the report. With the Golden Knights filling T-Mobile Arena to capacity nightly, and the Raiders franchise jumping in value 117% to $3.1 billion in the five years since announcing the move from Oakland to Las Vegas, the Southern Nevada market is considered ripe for more major sports.

The Athletics already have a footprint in Southern Nevada, as the Las Vegas Aviators serve as the franchise’s AAA affiliate. The Aviators play in Las Vegas Ballpark, a 10,000-seat venue that opened in Summerlin in 2019.

It is not yet known where an MLB team would play in the event of a relocation to Las Vegas. When the city was in the process of luring the Raiders from Oakland in 2016, the local government agreed to raise the hotel tax in order to fund $750 million of the $2-billion project.

The Athletics have had no success in negotiating any such agreement with the city of Oakland. The latest proposal, presented by the team last month, was for a $12-billion renovation project in downtown Oakland that would have included a brand-new $1-billion stadium along with housing developments, retail space and infrastructure upgrades. The mayor’s office released a statement bristling at the cost, which prompted MLB and the Athletics to announce their intentions in seeking a new market.

“The future success of the A’s depends on a new ballpark,” team owner John Fisher said in a statement. “Oakland is a great baseball town, and we will continue to pursue our waterfront ballpark project. We will also follow MLB’s direction to explore other markets.”

Analysis: Is Jordan McCabe UNLV’s point guard of the present?