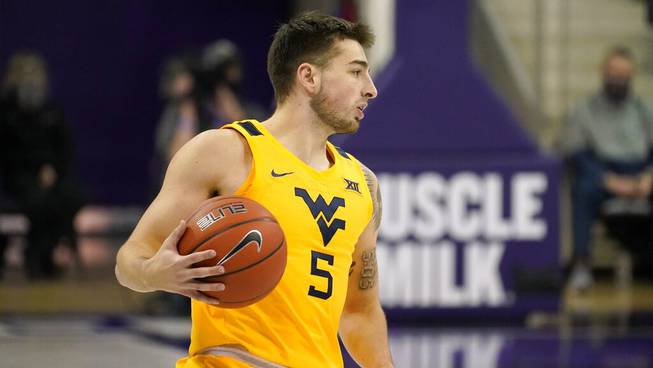 Analysis: Is Jordan McCabe UNLV’s point guard of the present?

When Kevin Kruger took over as UNLV’s head basketball coach in March, he knew the scope of the task ahead of him. Coming off a massively disappointing sub-.500 campaign, the program was staring at a talent deficit in relation to the rest of the Mountain West, and to make matters more complicated, most of the roster had to be turned over in the span of one offseason.

So Kruger got to work. His first move, officially, was to sign an experienced point guard: West Virginia transfer Jordan McCabe, a former 4-star recruit with two seasons of eligibility remaining.

In terms of priority, it made sense to add McCabe first. UNLV was lost without a true point guard on the active roster last year, and Kruger, a former point guard himself, was probably determined not to let the same thing happen to his first squad.

So what is UNLV getting in McCabe? He never lived up to lofty expectations at West Virginia, averaging just 3.8 points and 1.9 assists in his three years under Bob Huggins, but there are some traits that suggest he could fit better with the scarlet and gray.

In reviewing game footage from last season, it’s clear that McCabe can pass the ball. He can decipher halfcourt defenses on the fly and anticipate where passing lanes are going to open, and he delivers some nifty assists:

He moves the ball quickly and willingly, too, even when he’s not the focal point of the play. As seen in the clips above, he picks up his share of hockey assists by making the pass that opens up the next pass. The unselfish attitude will endear himself to his new teammates.

The flip side of that playmaker attitude is a propensity to get over-aggressive and put the ball in harm’s way. McCabe recorded a turnover rate of 26.8% in each of the last two seasons, a mark that would have been the worst among UNLV’s guards last year and only exceeded by first-year forwards Devin Tillis (29.5%) and Edoardo Del Cadia (27.3%), both of whom have since departed.

McCabe’s handle is solid and he understands offense, so why all the turnovers? It’s his desire to always want to make the big play:

In terms of scoring the ball himself, McCabe struggled with that part of the game during his time at West Virginia. Though he appears to have a nice shooting stroke, he connected on 28.3% of his 3-point attempts over the past three seasons, which puts him firmly in “do not bother guarding him beyond the arc” territory on opposing scouting reports:

If you’re looking for reasons to be optimistic, however, there are some signs that McCabe could improve his accuracy at UNLV. First, he has always been a good free-throw shooter, including last year when he made 81.8% from the stripe. There is usually a correlation between free-throw shooting and 3-point shooting, which bodes well his outside shot.

And second, his attempts declined each year at WVU, and his accuracy tanked along a similar curve. Perhaps more frequent attempts will help him get into a better rhythm. As a freshman, he took 3.7 triples per game and made a career-high 33.8%; he bottomed out at 1.2 attempts at 21.2% last year.

McCabe’s off-the-dribble game was pretty limited against Big 12 defenses. Only 15.5% of his field-goal attempts came around the rim, and the game footage tells the story pretty plainly. He just didn’t have the explosion or the oomph to get past defenders and finish.

Length bothered him when he tried to attack off the dribble, and even when he got an angle to the hoop, his lack of vertical lift made it easy for defenders to block or alter his shots. When he converted off the dribble, it usually took a miracle finish:

The good news for UNLV fans is that McCabe won’t be getting swarmed by Big 12 defenders every time he dribbles toward the paint next year. The athleticism gap between that conference and the Mountain West is enormous, and McCabe could benefit from a little more breathing room.

On the defensive end, McCabe gives an honest effort, but again his athleticism held him back. He’s willing to get up on the ball and stick his chest into ball-handlers, but change of direction is not his friend. Opponents were able to get him off-balance regularly:

As a team defender, McCabe was pretty neutral in the handful of games I watched. He made two steals away from the ball just by staying at home:

Those two plays were the extent of his defensive impact, but that’s OK. Kruger wanted him for his ability to pilot an offense, and it looks like McCabe has the tools to deliver in that regard.

Will he set the league on fire and post eye-popping numbers? Probably not. But McCabe stands to benefit greatly from a change of scenery; instead of facing off against future NBA draft picks on a nightly basis in the Big 12, he’ll find the competition level to be a little more agreeable with the likes of Air Force, San Jose State, New Mexico and Wyoming making up a quarter of the schedule.

If McCabe handles the ball, initiates the offense, runs some pick-and-rolls and keeps the ball moving, he’ll play a big role on the 2021-22 team. And if he actually improves from beyond the arc and around the rim, Kruger could end up looking very smart for targeting McCabe as the first piece in UNLV’s rebuilding process.