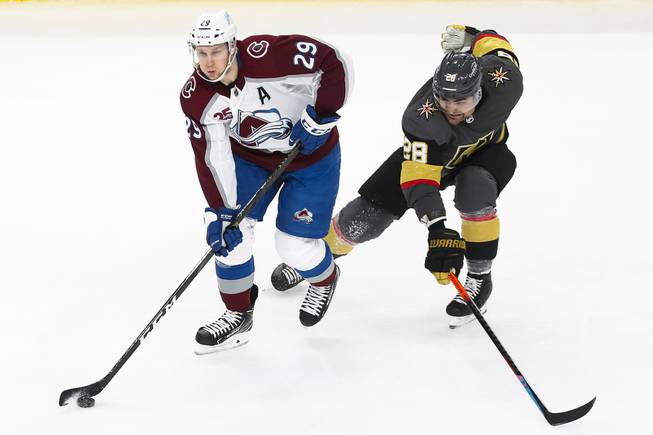 The Avalanche can be beaten

There’s no disputing that the Avalanche should be the favorite to win the Stanley Cup. But are these playoffs so preordained that Nathan MacKinnon’s name should start being engraved on the Cup? Of course not.

Look no further than Las Vegas Boulevard for the most obvious example. Mark Stone just completed a Hart Memorial Trophy-worthy season in his own right. Alex Pietrangelo and Shea Theodore lead the only blue line in the NHL with two players who finished in the top six of Norris Trophy voting last year. And Vegas has something Colorado can’t match: a great goalie tandem in Marc-André Fleury and Robin Lehner.

Colorado would have to beat Vegas just to get out of the second round, and that’s no lock. Yes, the Avalanche would be favored, but the Golden Knights have more than held their own in the season series. In fact, they won four of the first seven meetings with a +2 goal differential.

Sure, Colorado wasn’t totally healthy for some of those games, but that’s part of hockey. A lot of luck goes into any given season, and the Avalanche has often been on the wrong end of it this season with injuries and COVID-19-related absences. There’s no guarantee Colorado’s fortune will automatically flip with the start of the postseason.

Even if the Avalanche does prevail in a long-awaited series with Vegas, it will have an, ahem, avalanche of contenders still waiting.

Tampa Bay is the defending champion and could be lifted by the return of former Hart winner Nikita Kucherov for the postseason. The Lightning plays in arguably the league’s most top-heavy division in the Central, where the Carolina Hurricanes and Florida Panthers are also legitimate Cup contenders. Whoever comes out of the parity-stricken East division will be a tough out as well, and don’t even get Toronto started on how it could be time to break a 54-year title drought.

Colorado might be the favorite to win the Cup, but if sportsbooks offered a “Colorado vs. the Field” bet, anyone with any sense would run to the counter to bet against the Avalanche. — Justin Emerson

Injuries and illnesses are the only things that have held the Avalanche back all season, and only slightly at that. With Colorado now mostly healthy and closing in on full-strength, the other teams in the West division should be more than on notice. They should be terrified.

The Avalanche has been the seventh-most injury-
affected team in the NHL this season, according to Man Games Lost, which adjusts for quantity of player absences and their cumulative quality. And yet, Colorado was still the most efficient team in the league by a landslide. The Avalanche’s expected goal rate has hovered around 60% at 5-on-5 all season, according to naturalstattrick.com. That’s about 5% better than any other team in the NHL has posted during the past three seasons.

Colorado has been just as dominant by more conventional statistics, leading the league in goal differential for most of the year despite being hamstrung by terrible backup goalie play. That’s a factor that doesn’t traditionally matter in the postseason, when teams typically commit to one netminder. And the Avalanche can commit to one of the best.

It was fair to question goalie Philipp Grubauer coming into the season, but he’s having a career year sure to garner Vezina Trophy votes. In hindsight, it seems easy to see; at 29 years old, his ascent lines up with the usual NHL aging curve.

Grubauer also has the luxury of playing behind two of the league’s best defensemen in Cale Makar and Samuel Girard. And goal support is never a problem, since there’s arguably not a trio in the league more dangerous than Colorado’s top line of Nathan MacKinnon, Mikko Rantanen and Gabriel Landeskog.

Those risking tens of thousands of dollars on the NHL and shaping the betting market on a daily basis seem even higher on the Avalanche. Colorado has amazingly been an underdog only twice all regular season—both against the Golden Knights. And both of those times, the Avalanche had significant absences. Makar, Girard and Landeskog missed the first game (a 3-2 Avalanche win on February 16), and Grubauer and Rantanen were out for the second (a 5-2 Vegas victory on April 28).

Colorado has dipped as low as 4-to-1 in a futures market that rarely sees NHL teams drop past 6-to-1 in the regular season. Winning a Stanley Cup is incredibly difficult and there could be bumps along the way, but it’s hard to foresee anyone beating the Avalanche in a seven-game series. It’s even harder envisioning anyone in the West division preventing the Avalanche from at least reaching the Final Four. — Case Keefer