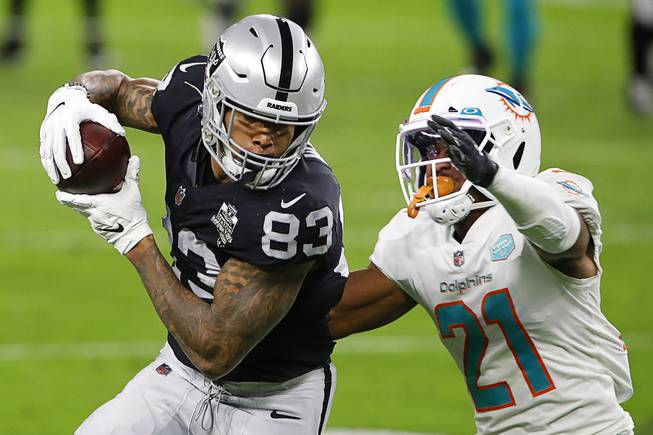 The NFL’s first-ever 17-game schedule is here, leading to every diehard fan running through the schedule of his or her local team to determine the wins and losses.

Let’s join in on the tradition. Here’s an admittedly-optimistic view on the Las Vegas’ Raiders 2021 season. The Raiders have one the lowest win totals in the NFL at William Hill sports books at over/under 8 juiced heavily to the under at -140 (risking $1.40 to win $1) compared to over at +120 (risking $1 to win $1.20).

But I have them meeting that mark with more than a month left in the season, and locking up a playoff spot with a week to spare in this projection.

Going week-by-week, here’s how it will all play out. Lines come from Station sports books.

Even if the Raiders’ pass rush has improved as much as they think it has during the offseason, their run defense is still going to remain a weakness. That’s a big problem against a Lamar Jackson-led team that’s had far and away the most efficient ground attack in the league the last two-and-a-half years.

After going 6-2 on the road a year ago, the Raiders start a new season with yet another victory away from Allegiant Stadium. This is a chance for the tweaked defense to shine as the Steelers were listless offensively late last season and could struggle just as much this season.

The Raiders had no business losing to the Dolphins last December. They avoid the collapse this time around, extract some revenge and celebrate a win at Allegiant Stadium with fans for the first time.

There’s no sophomore slump coming from Chargers quarterback Justin Herbert, who will be the best passer the Raiders see in the first month of the season. He should torch a vulnerable Raiders’ secondary at home.

Is rookie Justin Fields starting at quarterback for the Bears yet when they visit Las Vegas? Let’s say yes, and though he plays well to give the Bears a chance late, the Raiders’ defense holds to eke out a close victory.

There are no odds on this game because of the uncertainty regarding Aaron Rodgers’ potential trade to Denver. The Broncos remain the favorite to land the reigning MVP if he leaves Green Bay, but he’s not there yet and if he’s still not there once the season begins, the Raiders are the clearly better team. They should sweep the Broncos for the second straight season unless Rodgers shows up.

Let the two-week party on the Strip and dreams of a surprising AFC West title begin. Las Vegas improves to 5-2 before its bye week by slowing a young Eagles’ offense still finding its footing.

In recent years, the Raiders typically falter right when everyone starts to get excited about their potential. History repeats itself, as a healthy Saquon Barkley proves too much for one of the NFL’s worst run defenses.

Bounce-back spot. The Raiders came excruciatingly close to upsetting the Chiefs on Sunday Night Football at home last year. This year, they finish the job with prized free-agent Yannick Ngakoue having his best game in harassing Patrick Mahomes.

Ngakoue starts to put himself in the All-Pro conversation with a second-straight big game. The Raiders pile up the sacks against a tissue-paper Bengals’ offensive line.

Refer to Week 9 and apply the first sentence again here. The Cowboys have the type of offense to beat up on the Raiders, leading to this game extending the league’s unfortunate recent streak of uncompetitive Thanksgiving Day affairs.

The Raiders hadn’t won at Arrowhead Stadium in eight years before last year’s breakthrough. It might be another eight years before they do again with the way the Chiefs look like perennial contenders as long as Mahomes is around and in his prime.

Performance traditionally falls below expectation for teams playing back-to-back road games, and this looks like a particularly tough back-to-back spot. Cleveland was playing its best at the end of last season and only appears to have gotten better.

Again, assuming there’s no Rodgers, the Broncos have fired third-year coach Vic Fangio by now with clear sights on the future. The Raiders bludgeoned the Broncos at Allegiant Stadium last year, and this one won’t be much closer.

Daniel Carlson made a lot of big field goals for Las Vegas last year, and he boots through another here as time expires to clinch a wild-card berth. It will be a reverse of last season’s matchup between these two teams as Indianapolis’ playoff hopes are left reeling with the loss.

The Raiders might be playing for a better wild-card seed, but don’t be surprised if the Chargers have even more on the line here. With some better injury luck, an easier schedule and a Coach of the Year-type season from Brandon Staley in his first year, Los Angeles might have an outside shot at dethroning Kansas City as AFC West champions in the final week of the season. The Chargers hold up their end by beating the Raiders, but the Chiefs also prevail in Denver to stay on top for another year. Three AFC West teams reach the postseason including the Raiders at 10-7.