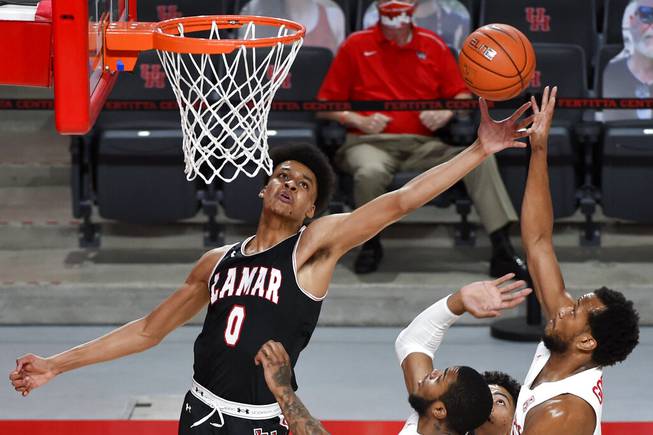 Lamar center David Muoka (0) and Houston forward Justin Gorham, right, vie for a rebound during the first half of an NCAA college basketball game, Wednesday, Nov. 25, 2020, in Houston.

When Kevin Kruger looked at his wide-open roster after being hired as UNLV head coach, one of the major pieces he wanted to add was a rim-protecting big man to anchor the defense.

Brandon Chappell, one of Kruger’s newly hired assistant coaches, had an obvious solution.

Chappell had been part of the staff that recruited David Muoka to Lamar two years earlier, and the 6-foot-10 Southland Conference Defensive Player of the Year just happened to be in the transfer portal. The fit was perfect, and Chappell assumed his relationship with Muoka would make it an open and shut recruitment.

“Of course David was on my mind,” Chappell said. “With the way the roster started shaking out and coach Kruger wanting some length and wanting a rim protector, David fit that mold.”

It turned out to be more of a recruiting battle than Chappell planned, but in the end UNLV beat out schools such as Pitt, Temple and Virginia Tech to land Muoka.

“We had to go to work, man,” Chappell said. “We had to compete with the rest of the schools. I was giving David a hard time. I said, ‘Hey man, I thought it was going to be easier than that. You made us work for it.’

“Gotta give props to Kevin Kruger,” he continued. “When he’s recruiting these guys, his passion and energy for UNLV spills out. When Kevin started getting involved in his recruitment, David felt that passion and energy coach Kruger had for the program and wanted to be a part of it.”

There was a reason that Muoka had so many serious suitors: His presence in the middle can single-handedly elevate a defense. As a sophomore last year, Muoka averaged 2.9 blocks and 6.8 rebounds per game, earning him Southland Conference Defensive Player of the Year honors.

Chappell didn’t know Muoka would turn into such a game-changer when the Lamar staff initially recruited him as a 2-star prospect in the Class of 2019. A native of Hong Kong, Muoka played his high school ball in Canada and averaged a modest 10.9 points as a senior.

In other words, he was a work in progress.

“It was kind of a lucky situation,” Chappell said. “We had a player who got injured that summer and decided to hang it up, so we were scrambling around for a big man late. We had a relationship with some people who mentioned his name, so we watched his film. It came down to, we could afford to take a kid who was kind of a big project.”

Muoka’s best attribute as he attempted to get up to speed at the college level was his attitude.

“David came in and we didn’t really know what to expect,” Chappell said. “I’ve got to give him a lot of credit, he had bigger dreams than we thought. He’s a humble kid and he came in and worked his butt off.”

As a freshman, Muoka started 15 games, played 17.3 minutes per contest and posted 3.2 points, 4.5 rebounds and 1.8 blocks. He continued improving during the pandemic offseason, and when college basketball started back up again the big man was ready.

In a breakout sophomore year, he posted 6.4 points, 8.7 rebounds and 3.3 blocks in conference play. Opponents shot 58.2% around the rim against Lamar as Muoka recorded an outstanding block rate of 12.3%. For context, no one at UNLV had a block rate higher than 5.6% last year. Utah State center Neemias Queta, the Mountain West DPOY, had a career block rate of 10.8% in college.

Now, after Kruger and Chappell won the battle for his services, Muoka is expected to anchor a rebuilt UNLV squad on the defensive end. The scarlet and gray finished 249th in the country last year in defensive efficiency (1.023 points per possession allowed), but recruiting efforts have largely focused on defensive-minded players like Muoka and transfer forwards Royce Hamm (Texas) and Victor Iwuakor (Oklahoma).

Chappell believes Muoka can be the type of player who makes every defender better around him.

“He’s just a true presence,” Chappell said. “Last year, whether he’d block a shot or not, guys coming into the paint thought about him. He altered just as many shots as he blocked this past year. Having him helped the guards pressure the ball more. It’s always good to have a guy like him with that kind of length.”

Chappell also expects Muoka to assume something of a leadership role. Though he is quiet by nature, Muoka is serious about basketball — a trait the coaching staff has targeted on the recruiting trail.

“With the guys we’ve recruited, we looked at character first,” Chappell said. “David is a laid-back kid, extremely smart, and he’s low-maintenance. You don’t have to worry about him. If he says he’s going to be somewhere, he’s going to be there.”