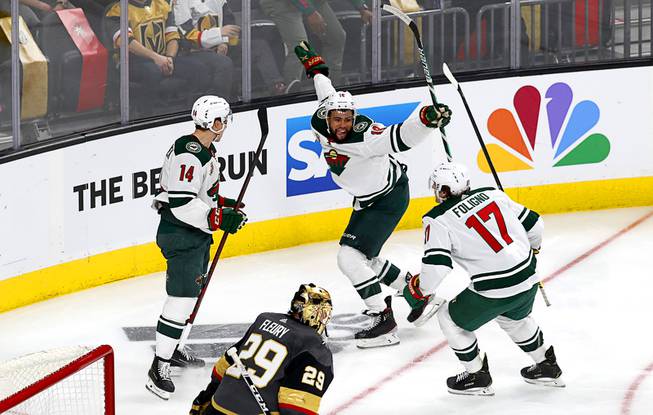 Sixty minutes came and went Sunday without one puck filling either net. The Minnesota Wild needed only 3:20 of overtime play to end it and draw first blood in the first-round playoff series.

Joel Eriksson Ek was the hero for Minnesota, his shot pinballing off Alec Martinez’s skate in front of the net and by Marc-Andre Fleury to send the largest crowd of the season home disappointed as the Golden Knights fell 1-0 the Wild at T-Mobile Arena.

The Golden Knights had just survived a penalty form Jonathan Marchessault, too. He left the box and was ready to rejoin play when the puck slipped off Alex Pietrangelo’s stick behind the Vegas net. The Wild kicked it around and found Eriksson Ek in the slot, who sent Minnesota home a winner.

Both goalies were tremendous on Sunday, as it marked the first time in Golden Knights history they went to overtime tied 0-0. Cam Talbot made 42 saves to record the shutout for Minnesota, and Fleury made 29 saves for the Golden Knights.

Game 2 is scheduled for 7 p.m. Tuesday at T-Mobile Arena.

The Golden Knights and Wild played one of the more entertaining games through three periods in Vegas playoff history. It just didn’t come with a goal from either side.

Despite chances on both ends in a high-flying third period, both Vegas goalie Marc-Andre Fleury and Minnesota netminder Cam Talbot stood tall through 60 minutes, and Game 1 of the first round of the playoffs was headed to overtime at T-Mobile Arena on Sunday.

The best sequence of the game to that point came just past the five-minute mark of the third off a takeaway from Mats Zuccarello. the Minnesota forward picked it off in the neutral zone and set up Kirill Kaprizov for the most dangerous chance of the game. He glided with the puck to the net on his backhand, transitioned to his forehand and tried to sneak one by Fleury.

The Vegas goalie chose then to make his best save of the game. He got caught sliding to his left, had to change position and dive to his right, his back arched and body contorted, and somehow kept the puck out of the net.

Not to be outdone, Mark Stone matched Kaprizov with a star-player-type play of his own. He collected the puck in his own zone and nearly went coast-to-coast, dangling the puck through three Wild defenders and charging to the net while drawing a penalty.

And when the Wild came back with a pair of looks, Fleury showed that he remained the best player on the ice on Sunday. First he stopped a Ryan Hartman wrist shot with his glove, then stretched across the crease again to pluck a Kevin Fiala one-timer out of the air.

Vegas finished regulation with a 40-27 edge in shots on goal.

A 0-0 tie can still be an entertaining game. Just check look at the Golden Knights-Wild Game 1 at T-Mobile Arena on Sunday.

The red light never turned on, but the Golden Knights and Wild went to the second intermission tied with the feeling of whoever can pot the next one might have the only goal of the game.

Minnesota withstood Vegas’ ferocious push in the first period and started to push back in the second. It took the Wild just 7:34 to match its shot total from all of the first, and they started to find their way offensively by stationing themselves in the crease. They generated a few good looks from in tight, and forced Marc-Andre Fleury to make an acrobatic save on Ryan Hartman a few minutes into the period.

The Wild’s best chance of the period came with 5:13 to go in the first, but Fleury made another windmill save to deny Nick Bjugstad on a 3-on-2 rush. They’ll have 1:34 of power-play time to begin the third.

In the Wild zone, the Golden Knights struggled to maintain any momentum. Minnesota did a good job getting players’ sticks into passing lanes and exiting the zone, preventing Vegas from setting anything up.

The Golden Knights had their best extended zone time shortly after tweaking their top line. They dropped Tomas Nosek form the line with Chandler Stephenson and Mark Stone, elevated Alex Tuch and immediately created a a good chance. The next shift followed that up with strong pressure in the zone.

But still it remained scoreless. The second period was more even than the first, with the Wild leading 13-11 in shots. Vegas led 30-18 total.

Whoever wins the series between the Golden Knights and Wild might just be whoever has more players remaining at the end of it.

Vegas and Minnesota spent the first period beating the tar out of each other and though Vegas cranked up the pressure at the end of the frame, could not manage a goal and Game 1 went to the first intermission in a 0-0 tie at T-Mobile Arena on Sunday.

The Golden Knights started to find their groove in the final eight or so minutes of the frame, firing the final 11 shots of the period and and keeping Minnesota without an attempt on net in the final 8:27. After an early power play did little, the one at the end started to look goo. Vegas will start the second with 38 seconds of carry-over power-play time.

And all period, both sides looked to establish a physical edge. Vegas and Minnesota ranked first and second in the regular season in blocked shots, so it’s no surprise that the Wild blocked 11 in the first period. Vegas only had one, but also held the Wild to just nine shot attempts in the period.

The hits were another story. Minnesota had 25 hits to compared to Vegas’ 23 in the first, showing that the remaining 40 minutes will be in part a war of attrition.

Pacioretty out; Martinez in for Golden Knights vs. Wild

The Golden Knights will play Game 1 of the playoffs without their best scorer.

Max Pacioretty, who led the Golden Knights with 24 goals this season, did not take the ice for warmups Sunday and is not expected to play against the Minnesota Wild. However, Alec Martinez, Ryan Reaves, Tomas Nosek and Alex Tuch, all of whom missed multiple games to end the season are expected to play.

Reaves, Nosek and Tuch all skated at the team’s last practice on Saturday and were projected to play. Martinez did not, and has not publicly appeared since the May 8 game against the Blues. Nosek last played on April 24, and Reaves has been on long-time injured reserve since April 11.

Pacioretty has not been on the ice with Vegas since he left the May 1 game against the Coyotes in the third period.

Marc-Andre Fleury will get the start for Vegas, becoming the first goaltender in NHL history to play in 15 consecutive postseasons.

The Golden Knights are expected to line up as follows:

The Golden Knights begin the playoffs at noon today against the Minnesota Wild in their first home playoff game in more than two years.

Last season, the postseason was held at a neutral site in Edmonton because of the pandemic. The pandemic also limited capacity this season at T-Mobile Arena, but as restrictions are loosened throughout town, the Strip venue should be near 50% capacity with about 8,600 fans for the initial game of the best-of-seven-game series.

“It’s the most exciting time of the season, no doubt about that,” forward Reilly Smith said. “Everyone in our organization and our locker room has been anticipating this moment all year.”

The Golden Knights have welcomed back fans since March with capacity slowly trickling upward, peaking at 7,567 for the final three home games.

San Jose won that game in double overtime, but DeBoer remembered how poorly the Sharks did in the other games, losing 6-3 in Game 3 and 5-0 in Game 4. He’s coached two playoff series as a visitor, and is looking forward to his first run as the home coach.

“Eight or 9,000 in T-Mobile feels like 8,000 in some other rinks,” DeBoer said. “We’re just excited that we’re on to the new most important season and we’re going to be able to play in front of our home crowd to open this.”

Eight of the Golden Knights expected to dress will be playing in their first home playoff game with the Golden Knights. Several reached the Western Conference Final with Vegas last season, but that was in an empty arena as part of the playoff bubble.

“Even the first game with a couple thousand people it felt like the building was full,” defenseman Alex Pietrangelo said. “It’s always fun starting at home because you get that energy right off the bat, especially this year when people are just hungry to kind of cheer for something. Hopefully we can provide that great entertainment for them.”

Vegas and Minnesota are more than familiar with each other having played eight times in the regular season — most recently May 5. The Wild finished with a 5-2-1 record head-to-head, but the Golden Knights know that won’t matter if they take care of business at home in the playoffs. It’s a simple strategy: Win every game at home and win the series.

“There’s also just a whole lot more excitement, being able to play at this stage, especially having a lot more fans in our building. That’s definitely going to be a big factor,” Smith said. “This was our first goal, was to make the playoffs. Obviously we have high standards for ourselves and we have a long road ahead of us, but it goes through Minnesota.”