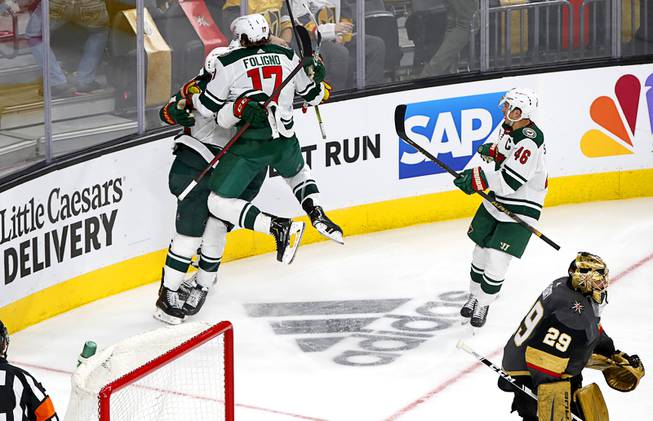 Vegas Golden Knights goaltender Marc-Andre Fleury (29) skates away as Minnesota Wild players celebrate their 1-0 overtime victory in Game 1 of a playoff series against the Minnesota Wild at T-Mobile Arena Sunday, May 16, 2021.

Comic-book writers have long grappled with how to even the odds against an all-powerful protagonist: If Superman can do everything, how do you stop him?

That must have been how the Minnesota Wild felt going against Marc-Andre Fleury on Sunday.

The Golden Knights netminder turned in a heroic performance, diving one minute to glove down a one-timer, then sliding across the crease to get a finger on a quick strike the next. It took a shot from the most dangerous area of the ice to beat him in a 1-0 overtime defeat, and even then the puck had to bounce off a teammate’s skate.

Fleury was spectacular. The Vegas offense, not so much.

The Golden Knights fired 42 shots at the net but none of them made it there, and Joel Eriksson Ek’s overtime winner for the Wild off Alec Martinez’s skate was the only goal of the game as Vegas fell into a one-game series deficit.

“It’s disappointing we couldn’t the win, couldn’t score one goal for him,” Vegas captain Mark Stone said. “I didn’t really expect anything different, he plays great for us every night.”

There’s a long list of Fleury saves that will end up on the highlight reels, but the best was when he denied rookie sensation Kirill Kaprizov in the third period. Kaprizov glided to the net, shifted from his backhand to his forehand and went in tight on Fleury.

Fleury was caught off guard. He initially darted to his left then had to change direction to protect the right post. It was clear he did everything he could to get to the puck, evidenced by his back arching and fully extending his stick hand, just getting a finger on the shot.

“I just tried to push as quickly as I could and I got a piece on the finger,” Fleury said. “So it was close, but it was a nice feeling to get that one.

He particularly haunted Minnesota forward Ryan Hartman, whose five shots tied for Wild’s team lead. He said after the game Fleury “baits” players into shooting for the glove, and was clearly beating himself up about it.

But he also gets to go home frustrated in himself but pleased with the team result — unlike several Golden Knights. It was the fourth time in franchise playoff history that Vegas has been shutout in a playoff game.

It missed a strong opportunity in the first period, when the Golden knights led 19-5 in shots on goal and held the Wild without a shot for the final 8:27 of the frame. The Golden Knights’ volume shooting approach didn’t work, as Minnesota Cam Talbot made 19 saves, many of them without much difficulty.

“We’ve got to find ways to score,” Stone said. “It’s not just finding those dirty areas. You’ve got to find loose pucks. We’ve got to make plays. You can’t just rely on taking 40, 45 shots. When you get the grade As, you’ve got to bear down and score. And we had lots of those.”

“I think for me, the first one is critical,” coach Pete DeBoer said. “To come out of the first period with the type of pressure we put on and not have anything to show for it was probably the biggest disappointment because they regrouped and the rest of the game was pretty even.”

The good news is the Golden Knights historically have taken Game 1 losses in stride and come out firing in Game 2. They have lost three Game 1s all-time and in all those instances won the next game and doing so each time by multiple goals.

The bad news is they’ll need a good game. The Golden Knights have never beaten the Wild on the road in regulation (one shootout win and one 3-on-3 win) and will need to win at least once at Xcel Energy Center to win the series.

Much has been made all season about Vegas’ goaltending duo, and DeBoer said it was an “easy decision” to go with Fleury considering the season he just wrapped up.

Fleury was spectacular Sunday afternoon, but it doesn’t matter if it’s Fleury in net or Robin Lehner or prime Dominik Hasek, Vegas isn’t going anywhere if it can’t score.

“We’ve got to find another goal tonight somewhere, somehow, at some point prior to it getting to overtime,” DeBoer said. “We’ll look for some answers there. And for me, just get a rest. That’s going to take a lot out of you physically when you lose a game like that. Mentally, too. It’s nice to have a day tomorrow to regroup.”