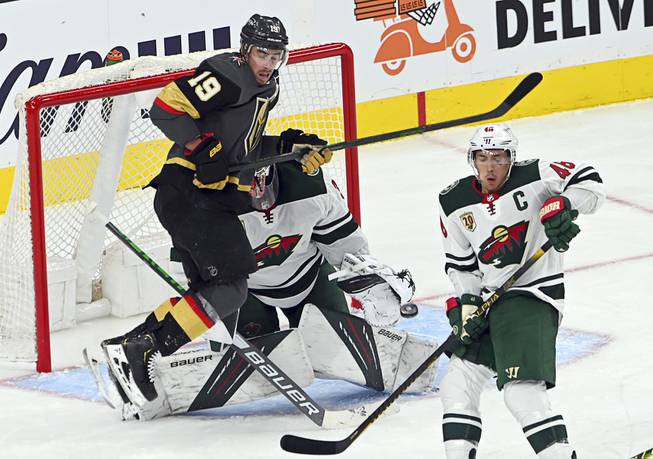 Late last week as the Golden Knights prepared for their first-round playoff series against the Minnesota Wild, coach Pete DeBoer noted that this year’s team has found scoring easier than last year’s group.

He probably shouldn’t have said that. Not because it’s untrue — it’s demonstrably true as Vegas has scored at nearly a half-goal per game clip higher than last season — but because it turned out to be quite the jinx.

Supernatural forces are as good any other explanation for the way Vegas continues to struggle against Minnesota, which beat the Golden Knights for the sixth time this season in a 1-0 overtime victory Sunday afternoon at T-Mobile Arena. The Wild now lead the best-of-seven series 1-0 going into Game 2 at 7 p.m. Tuesday night, and to turn things around, the Golden Knights will need to solve the same riddle that fooled them last postseason.

They need to once again awaken an offense that tends to disappear at inopportune times by translating strong possession numbers and scoring chances into actual goals.

“I don’t even remember last postseason, focused on this one,” Golden Knights captain Mark Stone said. “We outplayed them for the majority of the game, did a pretty good job. They got their chances towards the second half of the game, but I don’t know, we’ve got to find ways to score.”

But the Golden Knights’ fan base surely remembers last postseason, and probably remembers similar quotes from Stone and his teammates. Vegas ultimately reached the Western Conference Final but fell in five games to the Dallas Stars because of an inability to find the net, the same thing that pushed the previous series with overmatched Vancouver to seven games.

This year’s Wild are not nearly as overmatched as last year’s Canucks. The Golden Knights won’t live to see another round if they average fewer than 2 goals per game like they did in their final two series of last year’s playoffs.

The scoring drought in Game 1 against the Wild wasn’t the only thing that felt eerily similar to last postseason — so did playing without the one player best equipped to fix it. Three of four players DeBoer described as game-time decisions ended up playing on Sunday, but the one absence was Max Pacioretty, who also missed the round-robin seeding portion to start last year’s playoffs.

And his absence hurt in Game 1. The Golden Knights’ top line, one of the best in hockey throughout the season, did little damage without him.

DeBoer initially started Tomas Nosek in Pacioretty’s spot alongside Mark Stone and Chandler Stephenson, but it wasn’t long before he changed his mind and moved up Alex Tuch instead.

It kind of worked. The top line started manufacturing more chances at least, but the Golden Knights’ depth suffered.

But getting good looks has never been the problem with this team. Burying them is what’s continually eluded the Golden Knights in the postseason.

There’s a good chance it’s all just variance that will eventually equal out in the end, but there are other explanations.

Maybe the last couple Vegas teams haven’t adjusted well to the amped-up nature of the postseason, where opponents are far more willing to fling their bodies at any puck and any puck-handler. The Wild led the Golden Knights in both hits, 71-57, and blocked shots, 23-13, on Sunday.

Maybe goalies just raise their level of play to an extent that bothers the Golden Knights. There’s little doubt the best netminders are more locked in when the stakes are at their highest; Vegas needs only look at its own crease to reinforce that.

Marc-Andre Fleury had arguably his best game in one of the best seasons of his career on Sunday and was the only reason there was overtime period to begin with.  It’s clear a goalie’s had a day when the T-Mobile Arena public-address announcer reveals, “The play of the game is Marc-Andre Fleury’s glove save…” and everyone is left to wonder which one.

(The pick was his dropdown snipe of Ryan Hartman’s rocket wrister in the second period, but probably should have been his behind-the-back knockdown of Kirill Kaprizov’s point-blank attempt in the third period.)

The game-winning goal by Joel Eriksson Ek only went in after deflecting off of Vegas defenseman Alec Martinez’s skate, a weirdly appropriate result on a night Fleury’s teammates were disappointed and feeling like they let him down.

“Couldn’t score one goal for him,” Stone said with his eyes pointed down.

Minnesota goalie Cam Talbot was strong in his own right, to be fair. He had 42 saves, 13 more than Fleury, but didn’t have to work as hard as Fleury for most of them.

The high-quantity, low-quality results can’t become a trend like it did in last year’s playoffs but it’s uncertain when the Golden Knights’ offense might be getting a personnel boost. Pacioretty has now missed seven straight games with an undisclosed injury and there’s no indication whether he’ll be able to return Tuesday.

He’s not a cure-all anyway considering Vegas’ elimination last year came long after he was back in the lineup. But Pacioretty would certainly help as the Golden Knights find themselves on the verge of a familiar offensive crisis.

“You’ve got to find loose pucks and you’ve got to make plays,” Stone said. “You can’t just rely on taking 40, 45 shots. When you’ve got the Grade As, you’ve got to bear down and score them. We had lots of those.”