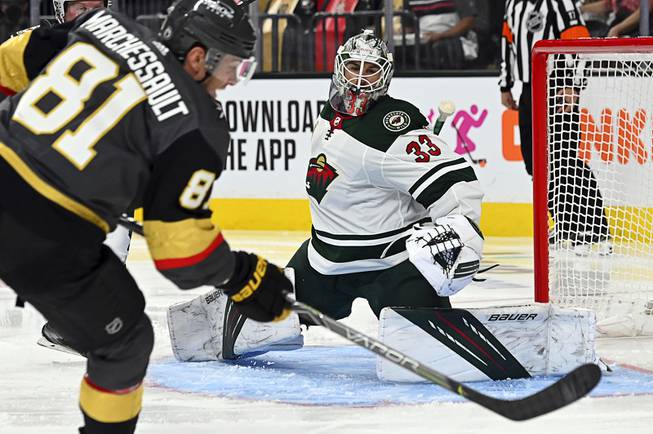 The Golden Knights felt like they did a lot of things right in Game 1 against the Wild, especially early on but didn’t get the outcome they wanted.

Now facing the threat of a 2-0 series deficit at home, Vegas knows the importance of Game 2, which is scheduled to begin at 7 p.m. at T-Mobile Arena. The Golden Knights need a victory and will look to replicate the process of what they did early in Game 1, but hopefully with a better result.

“We need a great start tonight. We need to lead after the first period,” forward Jonathan Marchessault said. “There’s no secret that we’ve got to be ready right from the puck drop and if we do that we should be in good position for the rest of the game.”

The first period on Sunday was the Golden Knights’ best, outshooting Minnesota 19-5. The rest of the game was pretty even, but Vegas missed a great opportunity to put the Wild on their heels early. A bouncing puck in overtime turned a strong game from the home team into a 1-0 loss.

Minnesota is a strong defensive team that excels in low-event games where it doesn’t have to chase the game. The Wild were 23-5-2 when scoring first in the regular season, but just 12-11-3 when allowing the first goal.

Granted, the same is true of the Golden Knights. They were an eye-popping 31-3-2 when they scored first, but 9-11-0 when they didn’t. It does underscore a major point of this game. In a game with two strong defensive teams, one can’t afford to have a 19-5 shot advantage in a period and not come out of it with a lead.

“I thought we had those intentions in Game 1; we just didn’t finish off one of the chances we had,” Vegas coach Pete DeBoer said of playing fast. “That can change the game, especially against a defensively structured team like Minnesota. You can’t play the same way behind as you do when you’re out in front defensively. That’s going to be a key I think in this whole series.”

The Golden Knights are expected to again play without leading goal-scorer Max Pacioretty, who did not take part in morning skate today, though it was optional. He has not skated with the team since he left the game on May 1 early.

And though the Golden Knights used an every-other-game rotation throughout much of the regular season with their goalies, Marc-Andre Fleury was the first goalie off the ice at morning skate, a typical indicator of that night’s starter. He also played Game 1, making 29 saves in a terrific performance.

With the Game 1 loss, Vegas will have to win at least one game at Xcel Energy Center to win the series. Asking to win two is a tall task for a team that has won there twice all-time, so a win tonight feels almost necessary for the Golden Knights’ chances in the series.

Sunday was the first time in four series that started at T-Mobile Arena that the Golden Knights lost Game 1 at home. The good news is that they’ve lost Game 1 three times and have come back to win Game 2 in each of those instances (they are 1-2 in the series overall).

The Golden Knights know how to shake off a playoff loss. They’ll need to do it again tonight.

“We lost Game 1, maybe could have won it, but I know we could have played better definitely for a full 60 minutes. We need to learn from that, be ready for (tonight) and come out with a good effort.”