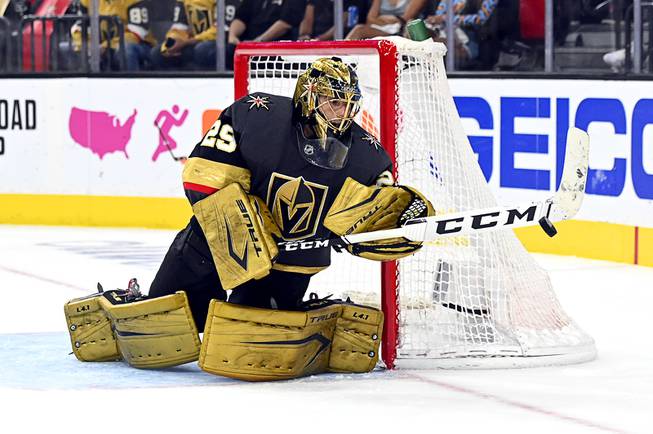 Vegas Golden Knights goaltender Marc-Andre Fleury (29) blocks the puck during the third period against the Minnesota Wild in Game 2 of a first-round NHL hockey playoff series Tuesday, May 18, 2021, in Las Vegas.

Minnesota Wild defenseman Matt Dumba slouched his shoulders, looked down at the T-Mobile Arena ice and skated around aimlessly for a moment late in his team’s 3-1 loss to the Vegas Golden Knights Tuesday night.

Dumba had just seen the second of two shots he fired in less than two minutes swallowed effortlessly by Golden Knights goalie Marc-Andre Fleury. If Dumba and his teammates were frustrated, they had every reason to be.

Fleury is the primary, if not only, reason the Wild aren’t leaving Las Vegas with the 2-0 first-round Stanley Cup Playoffs series lead they probably feel like they deserve. Instead, the Wild and Golden Knights head to the North Star State for Thursday night’s Game 3 deadlocked at one win apiece after Fleury managed his second straight dominant performance on Tuesday.

“I feel good, you know,” Fleury massively understated in an attempt to not have to talk about himself. “I’m stopping the pucks when they come at me, and the guys are battling hard to get those goals. It’s nice to see.”

Johnathan Marchessault’s quick-strike equalizing goal, equipped with shades of Golden Knights’ playoff past, will be the talk out of the Game 2 victory. It might even be looked back on as the moment the team got on track offensively if they prevail in the series.

But with almost any other goalie, any mere-mortal goalie, it wouldn’t have mattered as much. Without Fleury, the Golden Knights wouldn’t have been down 1-0 at the time.

They would have been down at least 2-0, probably 3-0 and conceivably even worse than that. The Golden Knights greenlit a parade of the Wild’s best players to fling pucks at Fleury for the opening period of Game 2, but Fleury let none of them through.

“He stood on his head in the first period,” Marchessault said.

Can you imagine if this guy was traded in the offseason? That point, and all perspective on how far Fleury has come since getting benched last postseason, may feel belabored by now, but it shouldn’t.

Fleury’s late-career turnaround is so remarkable that it bears repeating and more repeating. This is a 36-year-old whom most of the hockey world thought was done a few months ago.

Now he’s the best part of a team that led the NHL in goal differential and only lost the President’s Trophy for most regular-season points on a tiebreaker. The Wild have arguably been better than the Golden Knights all across the ice for two games except one spot — the goalie crease. And Minnesota’s Cam Talbot hasn’t been bad at all; he just hasn’t been Fleury.

“He’s been consistently excellent all season, so for me he’s just doing what he’s done all year for us,” Golden Knights coach Pete DeBoer said.

That’s the correct thing to say, but it’s not entirely true. Fleury has played great throughout this shortened Golden Knights’ campaign, but he hadn’t been transcendent like in these first two playoff games since the midseason stretch when Robin Lehner went down, and he carried the team for a while.

Get Fleury an extra-long back massage during Wednesday’s recovery day because he’s now carrying the Golden Knights again. His Game 2 performance wasn’t as flashy as the Game 1 galore of glove saves but it might have been even better.

Fleury had 35 saves on Tuesday as opposed to 30 on Sunday and received less help, at least early. He praised his teammates’ defensive performance after the victory, which must mean he has a short memory because it was rather languid for the first period-and-a-half.

The Wild bullied their way in close to Fleury and regularly had a screener in front of him to muddle save opportunities. That’s how they eventually scored, as Minnesota wing Marcus Foligno kept Fleury from ever getting eyes on a Dumba shot at 12:07 of the second period.

Pair that with the Wild’s deflected, friendly-fire overtime game-winning goal on Sunday, and they haven’t scored cleanly on Fleury once in the series.

“Definitely kind of a tough loss in Game 1, 1-0 in overtime, he played great so we wanted to get him a win and he kept us in it in the first period so it was all in his honor,” Marchessault said.

Going into the series, a compelling argument could have been made advocating for the Golden Knights to stick with their goalie rotation between Fleury and Lehner. Now that’s not even a question and it’s to no fault of Lehner.

Fleury has been the most important player in the series through two games, and it isn’t remotely close. The Golden Knights will likely get other parts of their game going eventually — especially if Max Pacioretty returns — but at this rate they’re only going as far as Fleury can take them.