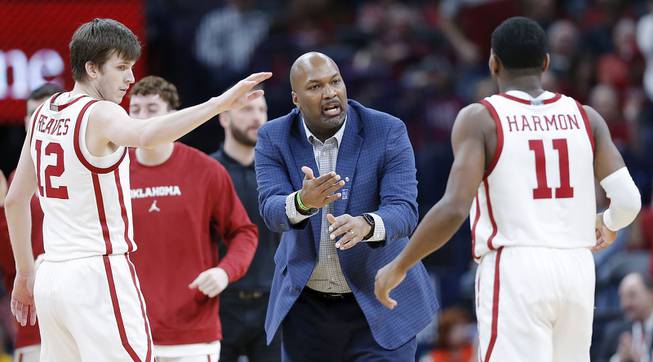 According to Carlin Hartman, joining the UNLV coaching staff was five and a half years in the making.

Hartman played college ball at Tulsa and spent a couple years in the Continental Basketball Association before beginning his coaching career in 1996. After stops at McNeese State, Louisiana-Lafayette, Richmond, James Madison and Columbia and three separate stints at Rice, he found himself joining Lon Kruger’s staff at Oklahoma in 2016.

That’s when he met Kevin Kruger, as they both joined the Sooners staff together in the months after Oklahoma’s run to the Final Four.

Right from the beginning, both Krugers began planting the seeds for an eventual move to UNLV. And when Kevin Kruger was named the program’s head coach in March, it didn’t take much to convince Hartman to join him in Las Vegas.

“Coach Kruger and Kevin spoke so favorably about their experience at UNLV, so when Kevin became the coach and we started talking about it, it just became about how we were going to make it work contractually more than anything,” Hartman said.

Hartman and Kevin Kruger worked together as assistants at Oklahoma for three years (2016-19), and during that time Kruger impressed his colleague with his approach to the job.

“He’s a very good coach, very well-rounded,” Hartman said. “He’s a good recruiter and detail-oriented with his scouting reports. He does a good job with the guys implementing it.”

Oklahoma had a down year following the Final Four season, but rebounded to go 18-14 and make the tournament again in 2017-18. The next season, Oklahoma went 20-14 and advanced to the second round of the tourney.

Amid all the winning, Hartman and Kevin Kruger found they worked well together.

After the 2018-19 season, Kruger left Oklahoma to become an assistant at UNLV under T.J. Otzelberger. When he was named UNLV head coach in March and had to put together his first staff of assistants, Hartman became a clear target.

Lon Kruger announced his retirement on March 25, and that cleared the way for Hartman to officially join the UNLV staff a few days later. It is expected that Lon Kruger will also serve as a consultant of sorts as his son settles into the role of head coach.

Though Kevin Kruger is a first-time head coach, Hartman’s experience working with him made the move to Las Vegas an easy decision.

“I think the biggest factor is my trust in Kevin and my belief that he is going to do a really good job,” Hartman said. “I’m excited and thrilled to have this opportunity at UNLV.”

Kruger finalized his staff by retaining assistant Tim Buckley and hiring Brandon Chappell from Lamar. They hit the ground running, bringing in eight new players via the transfer portal (with one open scholarship still to fill).

One of incoming players, forward Victor Iwuakor, spent the last two years at Oklahoma, so Hartman undoubtedly had a big hand in that recruitment.

“It has been a whirlwind,” Hartman said. “I got in five weeks ago after coming from Oklahoma, and everything has gone pretty fast. We’ve really been working hard to get the roster turned the way we want.”

Hartman has a strong reputation as a recruiter, so in addition to scouring the transfer portal he has also begun laying the groundwork for future recruiting classes. And with so many new players coming in, he said the staff has also made it a priority to get to know everyone.

“We’ve been familiarizing ourselves with the university,” Hartman said. “I’ve been getting to know the different high-school programs, coaches, and AAU programs we’re going to be involved with. We want to get comfortable with the players in our program and make sure they have a chance to get to know us. Having real conversations with the kids, let them know our vision for the program and see if those things align.”

Now that he’s here, Hartman sees what the Krugers saw in UNLV five and a half years ago.

“I think this program can be a perennial NCAA Tournament team,” Hartman said. “That’s the mindset we’re coming in with; I’ve been to the last four, Buck has a lot of NCAAs under his belt, Kevin has experienced it as a player and coach. Our mission is to win the Mountain West Conference and go to the tournament, and we have the capability to do that.”