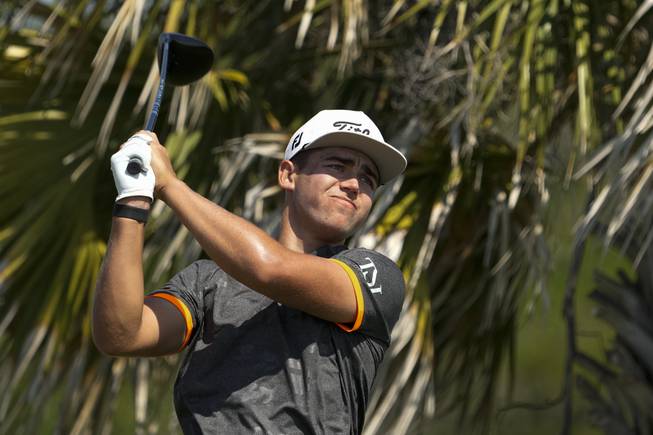 Garrick Higgo, of South Africa, watches his tee shot on the third hole during a practice round at the PGA Championship golf tournament on the Ocean Course Tuesday, May 18, 2021, in Kiawah Island, S.C.

Garrick Higgo traveled more than 24 hours from his home in South Africa to arrive in Las Vegas for the first time, and the then 18-year-old didn’t have any time to rest once he landed at McCarran.

His new UNLV golf teammates picked him up straight from the airport and headed to Southern Highlands Golf Course to meet and practice with legendary Rebels coach Dwaine Knight. Higgo then proceeded to birdie or eagle seven of the first 13 holes.

“That was my first introduction to him,” Knight said. “I was obviously very impressed. He just kind of lit it up right off the bat. Being in this business as long as I have been, that’s something I had never seen before.”

Higgo, who turned 22 years old last week, only lasted one year at UNLV before turning professional, but it’s turned out to be shrewd decision. He’s back in the United States for the first time since leaving UNLV this week to play in his first major tournament, the PGA Championship starting this morning at the famed Ocean Course in Kiawah Island, South Carolina.

Higgo qualified for the event and established himself as one of the fastest-rising golfers in the world, climbing to No. 51 in the Official World Golf Rankings, by winning two tournaments on the European Tour over the last month. The European Tour is considered the second-best circuit in the world, behind the PGA Tour, but Higgo’s two wins amounted to a relatively modest total of less than $600,000.

The winner of the PGA Championship this week will earn more than three times that amount, just less than $2 million.

“I don’t know what to expect,” Higgo said at PGA Championship media day on Tuesday. “My game is in good shape. I mean, I think I’m just going to learn a lot. Hopefully I’ll have a good week. If not, I’ll just learn.”

Higgo familiarized himself with the course, which he said reminded him of a lot of the links he plays on the European Tour, by playing nine holes with defending PGA Championship victor and Las Vegas local Collin Morikawa. He leads the usual spate of Rebels in a major, which this go-around includes Charley Hoffman, a member of UNLV’s 1998 national championship team, 2013 Masters winner Adam Scott and fellow European Tour standout Kurt Kitayama.

Knight heard of Higgo through his ties to the South African golf scene, which dates back to the late 1980s when he recruited Warren Schutte to town. In 1991, Schutte became one of the school’s two individual golf national champions — along with Ryan Moore in 2004 — under Knight’s watch.

“I’ve been around a lot of good players but (Higgo) is one of the most naturally talented, gifted players I’ve ever seen,” Knight said. “He was a Tour-like talent right away is basically how I would describe him.”

Higgo made the 2018 All Mountain West Conference team during his one season in Las Vegas but ultimately decided to return home to continue his career. He got on South Africa’s Sunshine Tour for the 2019 season and promptly won twice including the tour championship.

“It was just a rushed thing getting him over here, getting him in school and he had a girlfriend back in South Africa and got very homesick,” Knight said. “But he sent me a written note about appreciating his time here and the opportunity he had and the friendships he gained. Those were precious to him, and one of the last things he said was, ‘Next time I get to see you, can you give me a putting lesson?’”

Higgo said putting was his weakness coming into this season but he’s switched equipment and figured it out while winning the Gran Canaria Lopesan Open and Canary Islands Championship. He won the latter by six strokes with a 27-under par, tying history made by Tiger Woods in the process.

Woods and Higgo are now the only golfers since 1990 to win three events in either the PGA or European Tour in their first 26 starts.

Playing in a major for the first time is a notoriously pressure-filled experience, but Higgo isn’t buying into any of that talk. He’s known for a cool demeanor on the course and says he’s never thrown a club.

He believes he plays his best when he’s enjoying himself, so that’s what he intends to do this week. At this rate, the 2021 PGA Championship will be the first of many majors.

“I think if my game is as good as it is, as it’s been, I think I could do pretty well,” Higgo said, “but there’s no expectations.”