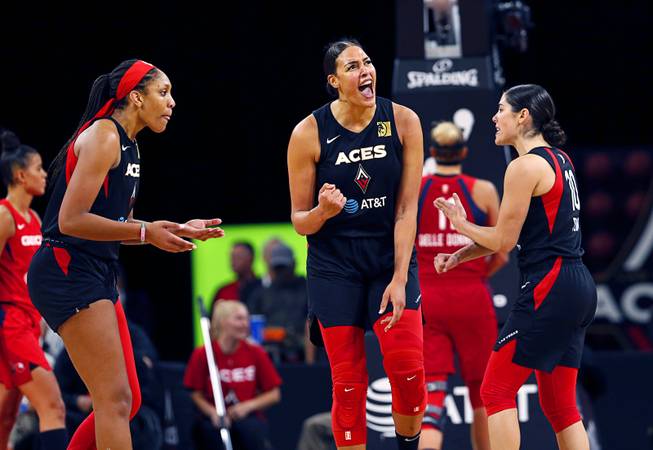 Las Vegas Aces center Liz Cambage (8) celebrates with A’ja Wilson (22) and Kelsey Plum (10) after drawing a foul during Game 4 of a WNBA playoff series against the Washington Mystics at the Mandalay Bay Events Center Tuesday, Sept. 24, 2019.

In order for the Las Vegas Aces to reach their full potential, center Liz Cambage will have to buy into the team concept.

“She’s a physically dominant person, so she always plays 1-on-5,” head coach Bill Laimbeer says. “Well, this is 5-on-5 to win a championship. She understands that. She’ll have her moments when she goes off by herself, but overall, she has made a commitment to being a team player.”

Cambage returns to the team after taking a year off during the Aces’ run to the league finals last season in the WNBA bubble. She rejoins league MVP A’ja Wilson and an all-star cast as the Aces aim to finish the job this time. Meet the players:

• Liz Cambage, C, 6-foot-8, 5th year: Cambage opted out of last season but has a long track record as one of the most dominant players in the world. In her lone season in Las Vegas (2019), she averaged 15.9 points and 8.2 rebounds.

• Emma Cannon, F, 6-foot-2, 3rd year: Cannon was a remarkable addition last year, as she signed with the Aces for the last regular-season game and eventually became an unlikely playoff contributor.

• Chelsea Gray, G, 5-foot-11, 7th year: A three-time All-Star and a WNBA champion with the Los Angeles Sparks in 2016, Gray is a standout long-distance shooter in the backcourt. She is also an excellent passer, and A’ja Wilson is excited to work with a guard who sees the floor the way Gray does.

“Her basketball IQ is through the roof,” Wilson says of Gray. “It’s crazy what she sees. She sees things that we might not even see until you watch film. When you have someone that’s in control and that’s your point guard that’s handling everything, it kind of puts you at ease.”

• Dearica Hamby, F, 6-foot-3, 7th year: Hamby has mastered her reserve role, claiming back-to-back Sixth Woman of the Year awards in each of the last two years. She figures to lead the bench unit again in 2021.

• Lauren Manis, F, 6-foot-1, rookie: The Aces drafted Manis last year but waived her before heading into the bubble. After a productive season in Europe, she’s now looking to make a mark in the WNBA.

Laimbeer thinks Manis needs to get stronger physically, but there’s a chance she could make an impact. “She’s longer, a little quicker than we thought,” Laimbeer says. “She’s one of those players that is going to scrap and fight to get the last spot on the team.”

• Angel McCoughtry, F, 6-foot-1, 12th year: McCoughtry gave the Aces a terrific presence on the wing last year, but she tore her ACL in the final preseason game last week and will be lost for the season.

• Ji-Su Park, C, 6-foot-5, 3rd year: Park has given the Aces a reliable third-string center for the past couple years. In a limited role, she gives the team a presence under the basket.

• Destiny Slocum, G, 5-foot-7, rookie: A second-round pick in the 2021 draft, Slocum is fighting for a spot in the Aces’ loaded backcourt. She averaged 15.0 points and 3.9 assists per game at Arkansas.

• Shakayla Thomas, F, 5-foot-11, rookie: An explosive athlete, Thomas is looking to latch on with the Aces after spending the past two years overseas.

• Riquna Williams, G, 5-foot-7, 9th year: Williams was a double-figure scorer for the Los Angeles Sparks in each of the past two seasons, and she knocked down a career-high 42.2% from 3-point range in 2020.

• A’ja Wilson, F, 6-foot-4, 4th year: Wilson came into her own in the bubble, earning the league’s MVP award while leading Las Vegas to the WNBA Finals. On a team full of superstars and former No. 1 overall picks, Wilson is queen bee.

• Jackie Young, G, 6-foot, 3rd year: One of those aforementioned No. 1 picks, Young came off the bench last year and gave the team 11.0 points and 3.0 assists per game. She could be in line for a breakout campaign if there are enough shots to go around, but Laimbeer cautions against judging Young solely by her scoring numbers.

“Last year she learned what she could do,” Laimbeer says of Young. “She can handle the ball if she needs to; she can do multiple things. She’s the glue player.”

Assessing the obstacles: Who stands between the Aces and the WNBA title