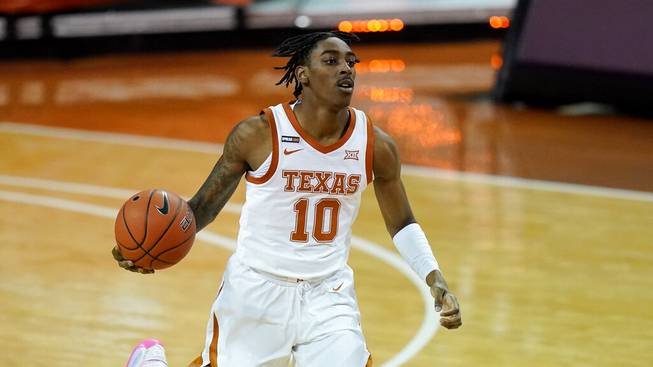 Kevin Kruger’s vision for UNLV basketball is quite different than that of his predecessor. While former head coach T.J. Otzelberger prioritized offensive skill such as passing and shooting (often at the expense of athleticism), Kruger appears to be building a team that can run, jump and best its opponents with sheer physicality.

How does that look in practice? It looks like a roster of long, explosive athletes who may need further development when it comes to the finer points of the game.

Swingman Donovan Williams might be the poster boy for that approach. The Texas transfer is loaded with natural gifts — he measures in at 6-foot-6 with long arms and explosive leaping ability — but more refinement could really unlock his potential.

Williams was a 4-star recruit in the Class of 2019, but he never received consistent playing time at Texas, which probably hindered his individual progress. But one aspect of his game that stood out when watching a few of his games last year is how disruptive he can be on the defensive end thanks to his length.

Williams isn’t always in good position, but because of his seemingly infinite wingspan he can bother ball-handlers and pick up his share of deflections:

That ability to get his hands on the ball is probably the best aspect of Williams’ defense, but he also showed some on-ball chops in the games I watched, especially when he was able to get his footwork in sync.

He’s not the quickest moving side to side, but when he keeps his feet moving and stays in front of the ball, his length allows him to cut off opposing ball-handlers:

Just by eyeballing Williams’ measurables and watching him glide around the court while switching to match up against multiple positions, you have to be intrigued by his defensive potential. He could develop into a legitimate game-changer on that end of the floor. But he still has a lot of developing to do before he gets there.

Team defense was not in Williams’ toolbox at Texas. That’s normal for young players who are used to dominating via their athletic prowess, but if he is going to reach his ceiling as a defender he will have to improve his awareness and understanding when he’s away from the ball.

At Texas, he often stood nearby, watching instead of helping:

You can see in the last play of that video that Williams is very late to react, and when he does slide over to help he attempts to draw a charge while standing well within the restricted area. His exasperated teammate points out the error.

With three more years of eligibility remaining, Kruger and his staff are undoubtedly hopeful they can teach Williams the nuances of defense and unleash a difference-maker.

They’ll have to do some teaching on the offensive end as well. Simply put, Williams is not a player Otzelberger would have recruited; he is not a natural shooter (he made 17.4% of his 3-pointers last year) and he doesn’t pass (his assist rate of 5.6% would have been second-worst on last year’s UNLV team, ahead of only Mbacke Diong at 5.1%). But again, the tools are there.

In the games I watched, Williams did not make an outside jump shot. Whether it’s a mechanical problem or a confidence thing or an issue of not enough reps, the results were all misses:

Like fellow incoming transfer Jordan McCabe, shots were few and far between for Williams (1.5 3-point attempts per game), so it would be harsh to judge him strictly by the percentages. If given more playing time, more shots and more of an opportunity to get into a rhythm, he might shoot more consistently. And he has been a good free-throw shooter (76.7% at Texas, including 84.6% last year), so that’s a good sign.

When the ball is in his hands, Williams shows some tantalizing offensive traits. He is quick, he can handle the ball and he has a long first step that can get him around defenders.

He plays with his head down, however, and often finds himself driving into situations that leave him at a disadvantage, forcing him to twist and contort his body in order to get off awkward-looking shots:

For a 6-foot-6 player with his length, Williams should be able to score in the lane. Because he has yet to master the art of creating angles and manufacturing space, however, just about every drive ends with him attempting a difficult finish. That led to him shooting 38.9% at the rim and 39.4% on all 2-pointers.

Williams ran into similar difficulties in the open court. With his long, swooping steps, he should be a monster when he’s got a full head of steam and the defense is on its heels, but he did not consistently take good angles or use his body to his advantage:

His open-court issues in 2020-21 might have been a matter of small sample size, because two years ago as a freshman he was making plays like this:

Williams didn’t put much passing on film either. He only recorded four total assists on the season, because as mentioned above, he has a tendency to play with his head down.

But if you want to see a couple of his passes, take a look:

In totality, Williams stands in contrast to the types of players Otzelberger was recruiting to UNLV. One obvious foil would be Devin Tillis, another 6-foot-6 swing forward who drew rave reviews from Otzelberger due to his basketball IQ, shooting touch and knack for finding the open man. Because of those skills, Otzelberger overlooked the fact that Tillis couldn’t run or jump.

Williams, on the other hand, is a smooth, explosive athlete who is still trying to develop the basketball expertise that came naturally to Tillis.

Kruger is banking on Williams’ development. If the coach is right, Williams could end up being the best of both worlds.