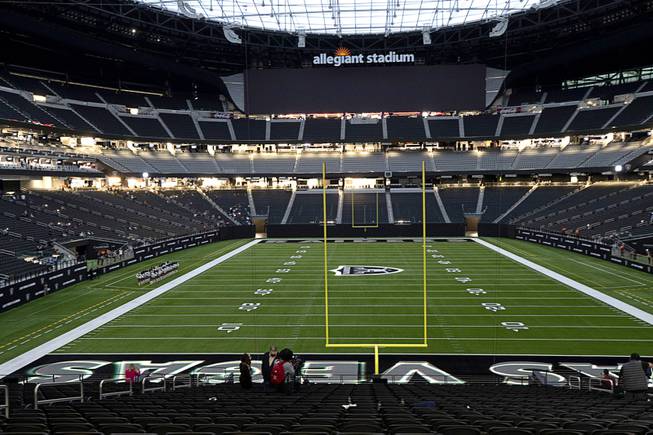 Lights are projected onto the field during a 2021 NFL Draft Party at Allegiant Stadium Thursday, April 29, 2021.

The first Raiders’ game with fans at Allegiant Stadium won’t be the highly anticipated Week 1 matchup when the Baltimore Ravens visit town, but rather a preseason opener against the Seattle Seahawks at 6 p.m. on Saturday Aug. 14.

The Raiders had previously announced they would host the Seahawks to start the new, smaller three-game NFL preseason but the date was revealed Friday along with the rest of the exhibition schedule.

The Raiders follow the game against the Seahawks with trips to take on the Los Angeles Rams and San Francisco 49ers on Saturday Aug. 21 and Sunday Aug. 29, respectively.

The Raiders and 49ers used to play regularly in the preseason but discontinued the series after mounting tensions between the fan bases led to multiple fights and a shooting following a 17-3 San Francisco win in 2001.

The second week game is expected to be the closest to a dress rehearsal for NFL teams this season after one preseason contest was dropped to make way for the new 17-game regular-season schedule.

The Raiders’ aforementioned regular-season home opener against the Ravens is set for 5:15 p.m. on Monday Sept. 13. The full schedule can be found here.

Victorious Aces put on show for fans in home opener