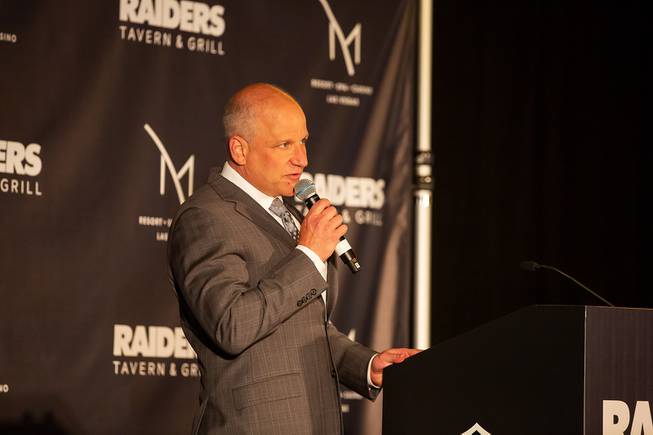 As reports continue to swirl about the possibility of the Oakland A’s relocating to Las Vegas, one prominent Raiders executive is keeping quiet…mostly.

Marc Badain, president of the NFL team, which moved from Oakland to Las Vegas last year, said it wouldn’t be appropriate for him to comment on the speculation that the Major League Baseball franchise could follow suit.

The Raiders and A’s shared what is now known as RingCentral Coliseum in Oakland, eventually becoming the last combination of pro football and baseball teams in the U.S. to share a stadium, a common practice in the 1960s, 1970s and 1980s.

“We had a challenging relationship as co-tenants,” Badain said today during a presentation to Las Vegas Valley real estate professionals. “The relationship was not a positive one, so I don’t think any good could come from me discussing that today.”

Earlier this month, Major League Baseball gave its permission to A’s ownership to search for a new city.

The A’s, just like the Raiders did for years, have been seeking public funding for a new ballpark in Oakland and have explored other possible locations in northern California.

According to multiple reports, A’s executives are scheduled to meet with Las Vegas officials in Southern Nevada next week.

Speaking about the new home the Raiders found in Las Vegas, Badain called the market a “gem.”

“This is a get-to-yes town,” Badain said. “Rather than finding obstacles, people here plow through obstacles then move to the next obstacle. That’s not the norm. Certainly where we came from, it’s the complete opposite.”

Still, the A’s say they’re not yet giving up on a proposed new waterfront ballpark in Oakland.

In a tweet Tuesday, A’s co-owner Dave Kaval referenced a “great Zoom negotiation session” with Oakland city officials. He said another meeting was scheduled for today.