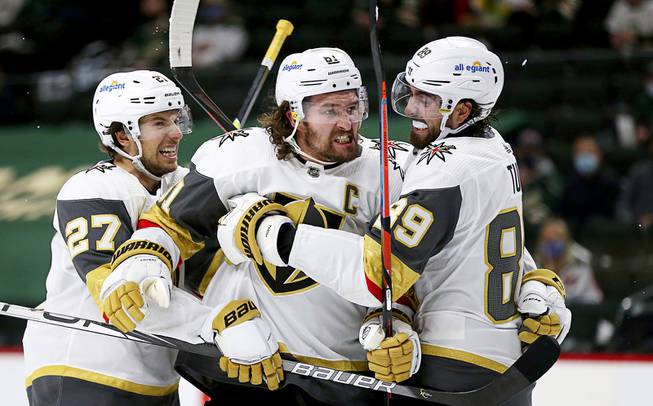 Vegas Golden Knights’ Mark Stone (61) celebrates with teammates after scoring a goal against the Minnesota Wild during the second period in Game 3 of an NHL playoff series Thursday, May 20, 2021, in St. Paul, Minn.

ST. PAUL, Minnesota — The Golden Knights talked this week about how important good starts were. They got the opposite of that Thursday and it couldn’t have mattered less.

Hot starts are good, blazing finishes are better. Vegas shook off one of the worst periods of the season and came back with some of the most dominant 40 minutes of the year, scoring five unanswered goals and beating the Minnesota Wild 5-2 at Xcel Energy Center in Game 3.

It was the Golden Knights’ first-ever regulation win in Minnesota, and gave Vegas a 2-1 lead in the series.

“It’s better to be down 2-0 after 20 than after 58 minutes,” said captain Mark Stone, who scored two goals. “Five, 10 minutes into the second period we got some big saves to keep us at two, then we kind of took over the game.”

Hindsight won’t be able to erase just how poor of a period the first was. The Golden Knights mustered just four shots on goal, tying a season-low for any period. They had only five shot attempts in 14 minutes at 5-on-5 and had a total of three scoring chances, according to Natural Stat Trick.

The offense was invisible.

The defense wasn’t very good either. The Wild had no trouble getting to the front of the net, scoring 2:16 into the game and adding another at 8:30, both from in close. The Wild had just seven shots on goal, but also seven scoring chances, three of which were high-danger. The Wild even had another goal taken off the board after a challenge ruled it offside.

“I don’t think we could have played any worse in the first period,” forward Reilly Smith said. “It seemed like we got our legs in the second period and kind of ran with it.”

The rally started with the captain. Stone struggled to produce in the first two games of the series and again through the first period. The Wild used the last change at home to match his line with their own shutdown line led by Joel Eriksson Ek, who scored Minnesota’s second goal against the Stone line.

Maybe it was a coincidence, maybe not, that Stone got things going against a non-Eriksson Ek line. Chandler Stephenson found him all alone in the slot and Stone didn’t miss, rifling the puck by Minnesota goalie Cam Talbot, his first of the night before adding an empty-netter in the final minute.

“He’s a great leader off the ice, but I think his biggest asset is on the ice and what he’s able to do,” Smith said. “He scores that goal early for us then the one late to ice the game. That’s what you need from your best players.”

It was the start of an overwhelming stretch for the Golden Knights. Immediately following the goal, the fourth line registered a 30-second shift where they had four shots on goal and ended with a penalty on the Wild. Vegas didn’t score on that power play but generated seven shots and took over the game.

From the time Kirill Kaprizov put a dangerous shot on net in the second until Kevin Fiala had the Wild’s next shot on goal, 7:36 of game time had passed and Vegas had 13 shots on goal.

Patrick Brown, playing in his first game since April 3 after a torn hamstring, scored soon after, with Smith adding his goal right after that, and suddenly a first-period nightmare turned into a 3-2 lead, drawing some boos from the 4,500 in attendance. The Golden Knights finished with a 22-5 edge in shots on goal in the second.

“That’s really the first appearance, I would say, other than maybe period one of Game 1, of our identity as a team and how we want to play,” coach Pete DeBoer said. “You’re not going to outshoot teams like that every night, but the way we got into the rhythm of the game and played our game and dictated, that’s something that we want to do consistently here in the playoffs.”

The third period was more of the same. There was no turtling by the Golden Knights, who continued to rain pucks on the Minnesota net with 14 shots. Most impressive was the defense, holding a Wild team desperate to recapture the lead in their first home playoff game in three years, to just four shots.

It was a one-goal lead for Vegas in the third, and any sort of bounce could have tied it up, but it never came. William Karlsson sniped in a dagger on a 2-on-1 with 2:24 left, and Stone scored into an empty net with 59 seconds remaining.

Vegas was outshot 7-4 in the first, then outshot the Wild 36-9 for the final two periods.

“When you’re down 2-0 after the first, you have 40 minutes to keep plugging away,” Stone said. “Once we got our forecheck going, we created some turnovers, got some pucks in on Talbot, and it made us a lot better team tonight.”

The Golden Knights exorcised a bit of a demon with the victory, their first in regulation at Xcel Energy Center in nine all-time trips. It was critical — after losing Game 1 at home, they needed at least one win in their dreaded house of horrors in order to win the series.

Vegas can win the series without having to win here again, if it takes care of business at home in Games 5 and 7. But Game 4 is here, and the Golden Knights will want to make Game 5 an elimination game for the Wild, and have a chance to clinch a series at T-Mobile Arena for the first time.

Thursday’s win was big in taking that step — not just that they won but how they did. They took the Wild’s best punches and got back up swinging. It’s what good teams do, and it’s what the Golden Knights did to take the lead in the series.