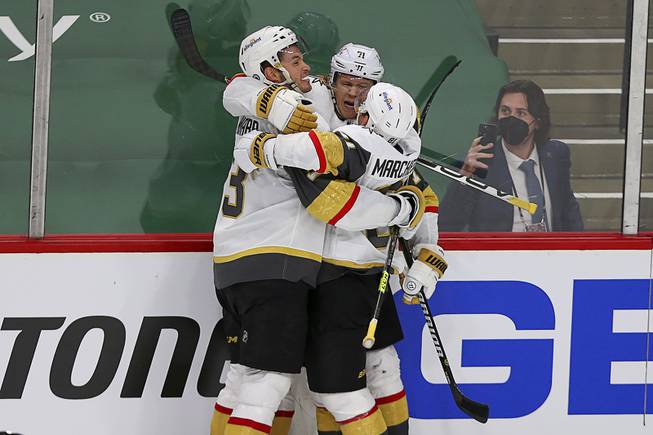 Vegas Golden Knights’ William Karlsson, center, celebrates with teammates, including Jonathan Marchessault, right, after scoring a goal against the Minnesota Wild during the third period in Game 3 of a first-round NHL hockey playoff series Thursday, May 20, 2021, in St. Paul, Minn. The Golden Knights won 5-2.

ST. PAUL, Minn. — The “Misfit Line” had a tough regular season against the Minnesota Wild. They’re more than making up for in the first round of the playoffs for the Golden Knights.

The line of Jonathan Marchessault, William Karlsson and Reilly Smith — so nicknamed for their role on the “Golden Misfits” inaugural team — have combined for three goals and seven points in the first three games of the series, including the game-winning goal from Smith and a dagger to ice it from Karlsson in Game 3. They’ve found their mojo this series, and will look to help Vegas take a 3-1 lead in the series in Game 4 at 5 p.m. at Xcel Energy Center.

“We’re doing some good stuff out there, so it’s working,” Karlsson said. “This team doesn’t give you much, so you’ve got to work hard and we do, so it feels that everyone has a goal and we can work on that tonight.”

In eight games against Minnesota in the regular season, the trio accounted for 11 points and six of the game came from Karlsson. They were outscored by Minnesota at 5-on-5 by a 4-1 margin, gave up 13 high-danger chances while generating nine, and had just under 48% of the expected goals when they were on the ice, according to Natural Stat Trick.

In the playoffs that line has a 3-1 edge in goals, 7-5 edge in high-danger chances and has 62 of the expected goals.

They’ve also netted some of the biggest goals of the playoffs so far. Marchessault scored a tying goal in Game 2 that might have saved the series, while Smith’s goal in Game 3 gave Vegas the lead it didn’t surrender. Karlsson put the game out of reach in the third period.

That line is leading the way as Vegas seems to have found its groove after an overtime loss in Game 1. The Golden Knights, despite a pair of shaky first periods, have been demonstrably better than the Wild, and a win would put the series on the brink of ending and give them a chance to clinch at home in Game 5 on Monday.

“Yeah it’s a big game for us, we want to go back home and have a chance to close it,” forward William Carrier said. “Everyone’s going to be dialed in, but it’s been a really tight series so I’m not expecting anything else.”

It’s fair to say Vegas might not be in the position it’s in without the play of its goalie. Marc-Andre Fleury has started all thee games of the series and has surrendered just four goals on 81 shots, a .951 save percentage to go along with a 1.32 goals-against average. He has saved 2.9 goals above expected in the postseason according to Moneypuck.com, second-best among all goalies.

And he is expected to start again tonight. The Golden Knights liked to alternate between him and Robin Lehner during the regular season, but Fleury has played so well it’s been hard to justify taking him out of the lineup.

“That’s what you want with any lineup decisions at any position is make it hard to take him out and make the decision easy on who to play,” coach Pete DeBoer said. “That’s all we’re looking for everywhere.”

The Golden Knights are 4-4 all-time in Game 4 and 3-1 when leading a series 2-1. The Wild are one of three teams this season to not have a three-game losing streak, while Vegas picked up its first-ever win at Xcel Energy Center in Game 3.