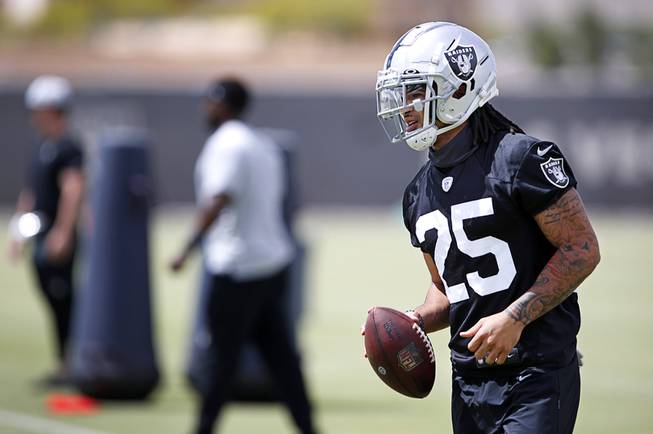 Las Vegas Raiders safety Trevon Moehrig, a second round draft pick, is shown during an off-season practice at the Raiders practice facility in Henderson Wednesday, May 26, 2021.

Of all the Raiders’ offseason moves over the past two months, trading up to take free safety Trevon Moehrig out of TCU in the second round of the NFL Draft might prove to be the most important.

The 6-foot-2, 202-pound defensive back from Spring Branch, Texas, was widely viewed as a late first-round pick but slipped a handful of spots to allow the Raiders to snag a highly touted player who perfectly fits a need. Moehrig didn’t try to downplay the hype around him after landing in Las Vegas by describing the impact he envisions making from Day 1.

“Coming from TCU, I was the quarterback of the defense, so I feel like I’m really confident coming in and taking that leadership role, command of the defense, taking the reins and just leading,” Moehrig said in an introductory news conference after getting drafted. “I’m super comfortable with that and confident with it.”

The Raiders hope Moehrig is all he’s cracked up to be and can help coax stronger play out of a long-struggling pass defense next season. The defensive backfield is the one area where Las Vegas still looks a little lacking as it enters a new phase of the offseason.

With the busy period of free agency in the past, the draft complete and the full schedule now released, on-field preparations for next season have begun. The Raiders have already held a rookie minicamp, and voluntary on-site offseason workouts are now running in three-day spans through June 10.

Yes, Las Vegas was among at least 21 NFL teams that officially voted not to partake in “organized team activities.” But no, that doesn’t mean the Raiders’ Henderson headquarters has been sitting vacant.

The majority of the Raiders’ players — at least more than 60 out of the current 90-man roster — were on the field for the first open practice of the year on Wednesday.

The votes that took place around the league are a result of a spat between the NFL Players Association and the league itself.

The NFLPA wants to emphasize that the workouts are supposed to be voluntary. It cites the success of last year’s season despite the lack of any in-person offseason during the first wave of the COVID-19 pandemic as a reason why team-mandated activities should be minimized before training camp begins in July.

Many NFL officials, including Raiders general manager Mike Mayock, disagree and stress the importance of players getting time on the practice field and in the weight room with coaching and training staffs.

“What I would tell you as an old man is that development of young players is key to the future of this game,” Mayock said at a news conference in March. “We don’t have any kind of developmental league anymore. I know certain veteran players don’t really need OTAs [organized team activities] like the young players do, but I’m telling you, without OTAs and preseason, trying to get these young players up to speed at a certain level is really difficult.”

Most of the defensive backfield appeared to be in attendance on Wednesday, and if the sessions hold as much importance as Mayock believes, there’s no Raiders position group that needs the time as much as Moehrig’s unit.

The Raiders gave up 7.8 yards per pass attempt last year, the fifth consecutive season in which they’ve ranked in the NFL’s bottom 10 in the statistic. A couple of late-game losses were the direct result of breakdowns in the secondary, and therefore helped keep the franchise out of the playoffs for the 16th time in 17 years.

Los Angeles Chargers wide receiver Jalen Guyton (15) tries to hold onto a pass as he is covered by Las Vegas Raiders cornerback Trayvon Mullen (27) during the second half of a game at Allegiant Stadium Thursday, Dec. 17, 2020. The pass was ruled incomplete.

The most common explanation was that Las Vegas was young in the defensive backfield, but the Raiders will be just as young this year. By most metrics, third-year cornerback Trayvon Mullen was the only decent starter in the four secondary spots last year, and even he had his down moments, including picking up two pass interference penalties in a crippling late-season loss to the Dolphins.

Damon Arnette, the rookie cornerback starting opposite Mullen, and second-year strong safety Johnathan Abram were more liabilities than assets when they were on the field, though both missed time with injuries and due to COVID-19 protocols.

“We’re looking for a bounce from those guys,” Mayock said. “It would be great if we could keep them healthy and get them to the playing level we expect.”

The Raiders have brought in players to push both Arnette and Abram over the past few months, including veteran cornerbacks Casey Hayward and Rasul Douglas as insurance for the former. They also signed their own former first-round pick Karl Joseph for a second stint with the franchise after he spent one season with the Cleveland Browns. Joseph could conceivably beat out Abram, or even Moehrig if he’s not as immediately ready as he thinks, for a starting spot.

Two of the Raiders’ final three draft picks were also spent on the secondary—safety Tyree Gillespie out of Missouri and cornerback Nate Hobbs out of Illinois. Most analysts projected both as longer-term projects, but the Raiders aren’t ruling them out from playing significant roles immediately.

“With the young guys we got in the draft, we’re pretty excited about where we could be in the secondary,” Mayock said.

With league completion percentages trending toward 60%, it has never been more important to field a competent defensive backfield. It’s hard to see the Raiders meeting their overall goals without their young secondary finally breaking through and realizing its potential.

If Moehrig can live up to his words, he could be the one who ushers in a new age of pass defense to help the Raiders transcend the mediocrity that’s recently haunted them in that department.

“I feel like Las Vegas will get that kind of a player out of me—somebody who can communicate, process, cover, come down to tackle, and that versatility aspect of it,” Moehrig said.