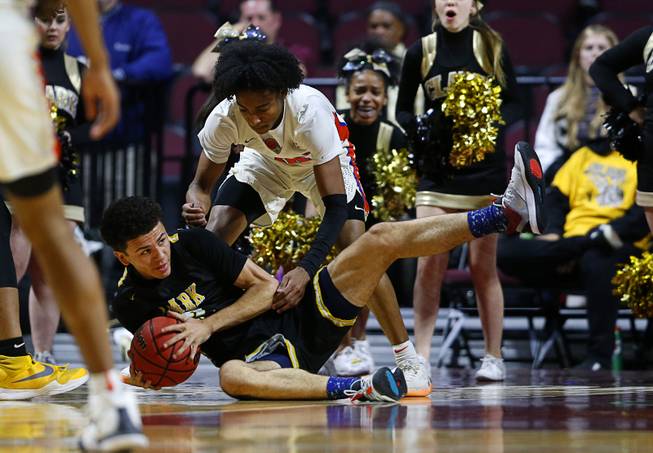 Clark High School’s Cameron Kimble (12) gets control of a loose ball during the Class 4A state high school basketball championship game against Bishop Gorman at the Orleans Arena Friday, March 1, 2019.

Cameron Kimble was a few weeks away from his graduation at Clark High School. He’s one of the top prep basketball players in Las Vegas, but because of the pandemic, was without a college home.

Reality started to sink in: He might have attend a junior college to achieve his Division I dreams.

“I was kind of getting nervous, but I know my skill set,” said Kimble, a 6-foot-5 wing. “I knew all of the how work I was putting in would pay off.”

Kimble wasn’t able to play on the club circuit last spring or summer because of the pandemic. His senior season of high school was also a COVID causality, meaning he had no game film with which to entice recruiters.

To make matters worse, programs were populating their rosters with proven college players from the NCAA’s transfer portal.

But Kimble was determined, even if it meant getting creative. He joined the Vegas Elite club team for a tournament two weeks ago in Oakland, and put on a show — he made 3-pointers, got to the basket with ease and defended multiple positions. He was one of the best players on the court.

The video made its way to the coaches at Western Michigan, who offered him a full scholarship last week. He was so happy that “I almost wanted to commit right there.”

A few days later, after consulting with family and coaches, he committed on Tuesday. In early July, he will arrive at the campus for the first time to start summer school — instead of visiting in person, he got a virtual tour.

But he’s not complaining, because “it was coming down to crunch time,” Kimble said

For Brian Sitter, director of Vegas Elite, having Kimble join the team for a few events was simply doing right by a Las Vegas kid. The goal, after all, is to get all of the players in his program to the next level.

“In our program, if we feel you are a Division I caliber, we will bring you back in the spring,” Sitter said. “Cam is such a great teammates, such a great guy to have around. We were all pretty nervous about (finding him a college spot). We were all pretty stressful. But Cam is a positive kid. He’s optimistic and didn’t let it affect him. He’s a carefree kid that always had a smile on his face.”

At this stage of the recruiting calendar, graduating players with no offers are likely ticketed to a junior college for a long route to Division I. And with the transfer portal, the odds of someone finding a home are extremely long.

But Kimble sensed he was an improved player. He spent the pandemic training at home, where the family has a hoop in the backyard. He also kept his fitness level up and lifted weights.

“Every program needs a player like Cam,” Sitter said. “He’s a glue guy. He will be there four years, and he will play a lot of meaningful minutes in those four years,”

Kimble was a starter as a sophomore at Clark, which lost in the 2019 state championship game. In the classroom, he was part of the school’s challenging magnet program, which he said has prepared him for the rigors of college life.

“A lot of the classes were just like it will be in college — listen to a lecture and go do the work,” he said.

He had late recruiting interest from San Diego and Alabama State, and many junior colleges and Division II programs offered a roster spot. But he knew he was worthy of a Division I spot. The coaches at Western Michigan felt the same.

“It was definitely a struggle, but we finally got there and made it to the end goal,” Kimble said.

Live Blog: ‘Where else would you rather be?’ Golden Knights host Wild in Game 7