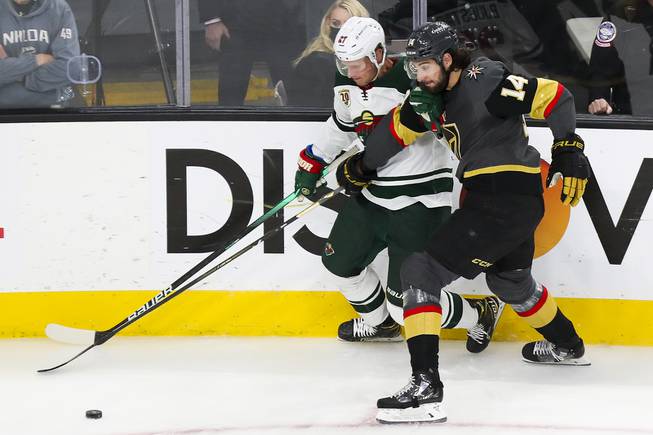 Nicolas Hague clutched his fists, squatted his knees and unleashed a double-barreled fist pump — and then another for good measure.

Hague had just scored a go ahead goal last week in the Golden Knights’ do-or-die Game 7 against the Wild, and couldn’t contain his emotions.

Hague is one of two Golden Knights playing in his first postseason, along with Keegan Kolesar. That was his first playoff goal.

“A little nervous at the start, but boy was that a fun game,” Hague said after Game 7.

Hague and Kolesar, along with Nicolas Roy and Zach Whitecloud — 24-year-olds in just their second playoff run — have evolved into key pieces of the Golden Knights depth as they prep for what they hope is a deep playoff experience. Vegas trails Colorado 1-0 in the best-of-seven-game second round series, with Game 2 on Wednesday in Denver.

Hague has played all but one game this postseason, and though Kolesar was the lineup casualty when Max Pacioretty came back from injury against the Wild, should return Wednesday after Ryan Reaves’ was served with a two-game suspension for an illegal hit in Game 1 against Colorado on Sunday.

Kolesar has made good use of his time in his postseason debut, including recording two assists in a Game 4 victory against the Wild.

“I was saying it all Game 1 (of the first round), even though the outcome, I was still telling everyone on the bench, ‘This is so much fun, this is so exciting’” Kolesar said. “Now it feels like I’m back in a natural game. Don’t have any jitters or anything like that.”

Hague plays most of his time with Whitecloud, while Kolesar has spent much of the playoffs on the same line as Roy. Whitecloud and Roy are a tad more experienced than Hague and Whitecloud after playing every game in last year’s postseason, but they’re still players coming into their own.

They’ve also scored some big goals. Roy scored the goals that Kolesar assisted on in Game 4 against the Wild, and like his defensive partner, Whitecloud picked up his first goal of the playoffs in Game 7.

“Those young guys have played big roles for us,” Vegas coach Pete DeBoer said. “We’ve got a nice blend of veterans and youth there, and the young guys have come in an contributed and played really well.”

DeBoer mentioned Alex Tuch as another young player on the Vegas roster, although it’s weird to think of the 25-year-old that way after four seasons of being a regular. Defenseman Shea Theodore is also 25.

While the contributions of the younger players have been noticeable, there have also been some growing pains associated with your maiden playoff trip.

Hague and Kolesar are two of only five Golden Knights with a negative expected-goals percentage in the series, and while the 7-1 defeat in Game 1 was rough for everyone, two plays stood with out where the younger players were exposed.

Hague could only watch as Nathan MacKinnon zoomed around him for a goal in the second period (though in fairness, MacKinnon does that to experienced defensemen, too) and Roy was caught puck-watching in the first as Gabriel Landeskog snuck behind him for Colorado’s second goal of the game.

Vegas isn’t in a position where it can pick and choose when and where to play its younger players. The Golden Knights are in for a fight against the Avalanche in the second round, and while stars like Mark Stone and Marc-Andre Fleury are expected to lead the way, they’re also going to need their young players to step up.

The Golden Knights may dress as many as five second-year players for Game 2. How deep Vegas plays into the summer will depend, in part, on just how well they do.