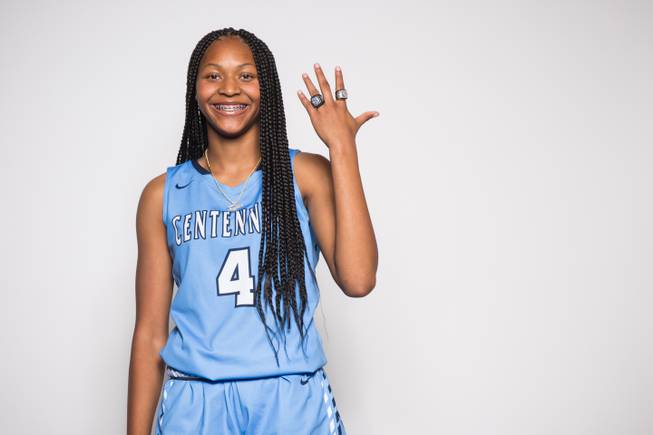 That’s the goal of Centennial product Taylor Bigby, who last week was again honored by Gatorade, this time for the 2020-21 season that never happened because of the pandemic.

She also was selected last week for Jordan Brand Classic, becoming the first girls players from Las Vegas since Aaryn Ellenberg in 2010 to become an All-American.

And, for good measure, the 6-foot-1 guard also graduated from Centennial last week.

By taking the Gatorade honor twice, Bigby joins the likes of boys players CJ Watson and Shabazz Muhammad to be two-time recipients. Both reached the NBA.

Bigby won three state championships at Centennial, finishing her three-year career with 780 points, 314 rebounds and 161 steals, according to Gatorade.  Centennial players have won the award each of the past five seasons — the others were Eboni Walker, Justice Ethridge and Sam Thomas.

Yet, Bigby is the lone two-time recipient, and rightfully so.

While the high school season was shelved by the pandemic, Bigby didn’t stop training. Her dad is the director of the Tarkanian Basketball Academy, giving her plenty of unlimited access to train. Day after her day she worked on her shooting, dribbling and more.

A five-star recruit, Bigby will play next season for Oregon, a perennial top 20 program. She has some lofty aspirations.

“I want to win a national championship as a freshman,” she said. “I want to start. If I don’t start I want to play major minutes. I’m the only person that can stop me. My ultimate goal is to play professionally.”

The Jordan Brand game won’t be contested because of the pandemic. But it’s still a tremendous honor when considering it’s the top 24 players nationally.

“These were definitely some of my goals,” Bigby said. “At the same time I didn’t expect anything because of the pandemic.”