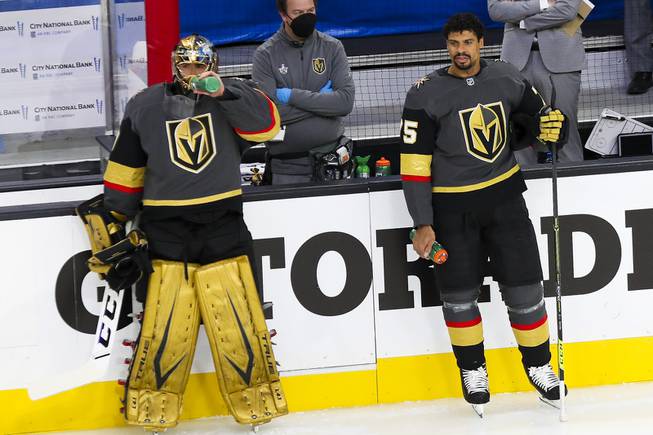 DENVER — There was an extra pep in the Golden Knights’ step at practice Tuesday. The rare off day in the postseason appeared to have done wonders.

Players took Monday off after the Game 1 loss to the Avalanche on Sunday and looked recharged when they had their first off-day skate since the playoffs began.

Vegas played its seven-game first-round series with the Wild in 13 days, and then two days later started the next round against Colorado after traveling to Denver.

The Golden Knights just finished their first two-day break of the postseason, and now rested and rejuvenated, they’re looking to get back in the series when the puck drops for Game 2 at 7 p.m. at Ball Arena.

“Anytime you can get an extra day to rest your mind and rest your body and take a little time off is huge,” defenseman Zach Whitecloud said. “Our guys took that day to get some rest and get away for a little bit and got back to work (Tuesday), so it was good.”

While the Golden Knights refuse to use the schedule as an excuse, it’s reality that they had a physical seven-game battle with Minnesota while Colorado was biding its time. The Avalanche polished off a sweep of the Blues on May 23, then had six full days of rest before Game 1 while the Golden Knights played three more games.

The Avalanche looked like the rested team in the first game of the series. They scored five minutes into the contest and turned in a rout. Considering the Golden Knights haven’t lost like that all year, it’s fair to suggest the imbalance in games tipped the scales in Colorado’s favor.

Now things are more back to even, and the Golden Knights know how important a victory tonight is.

“Looked at the tape, going to obviously make some adjustments to how we played in Game 1, and followed it up with a good practice (Tuesday),” coach Pete DeBoer said. “You never can predict results, but I know we’re going to have a good game (tonight).”

Vegas also used Game 1 as an opportunity to get goalie Marc-Andre Fleury a breather. The Vezina Trophy finalist played all seven games in the Minnesota series, and after not playing Sunday comes into Game 2 with four days’ rest.

It didn’t go well for Robin Lehner, who let in a career-high seven goals, but the decision itself made sense, as does returning to Fleury tonight. At practice Tuesday, DeBoer didn’t explicitly name Fleury the Game 2 starter, but conceded it was obvious which way things were trending.

Fleury played in seven of the regular season games against the Avalanche and won four of them, allowing 15 goals for a .932 save percentage and 2.14 goals-against average.

“I think it was tiring for our whole team and it showed a bit in Game 1,” Fleury said. “For me, personally, it was good to have a few days, rest the legs a bit, take it easy and have a good practice. I feel like we haven’t had a whole practice in a while, so it was good to just get out there and do some drills.”

Game 2 isn’t into “must-win” territory just yet. A win would erase the negative feelings from the first game while seizing home-ice advantage in the series. Even a loss, while creating the first 2-0 series deficit Vegas will have ever had, still puts the Golden Knights at home for two games in front of a 100% full T-Mobile Arena.

Still, the Golden Knights need to turn in a better effort than they did in Game 1, the most lopsided playoff loss in team history. They were chasing the game almost from initial the puck drop, which is hard to do on tired legs.

Vegas is hoping a few days off does wonders for them. There was a noticeable boost of energy at Tuesday’s practice, and if that carries into the game, the Golden Knights might just be heading home with a series split.