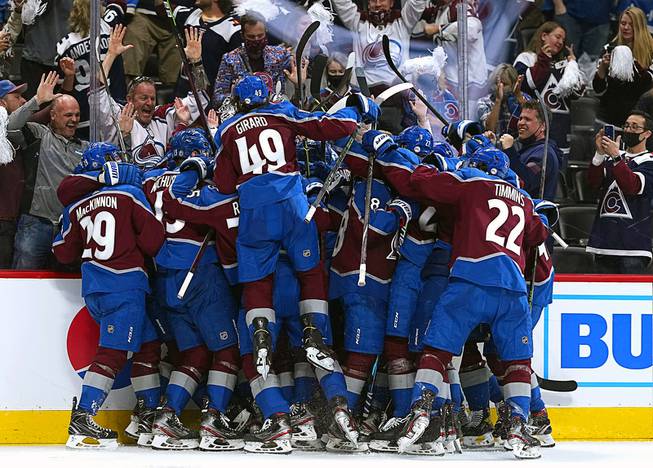 Blog: Golden Knights fall in OT of Game 2 to Avalanche

The most intense game of the Golden Knights’ playoff run so far ended in the most heartbreaking of ways.

Vegas was the better team for much of Wednesday’s Game 2, but took a penalty 44 seconds into overtime. The Avalanche made them pay, and Mikko Rantanen fired a laser into the net at the 2:07 mark of the extra period, and sent the Golden Knights to a 3-2 defeat at Ball Arena.

Vegas trails the series 2-0. Game 3 is set for Friday at T-Mobile Arena.

The Avalanche scored the first goal of the game early on, courtesy of a Brandon Saad shot that slipped off his stick and fooled Marc-Andre Fleury. Vegas battled back with a power-play goal from Alec Martinez, but Colorado scored a power-play goal of its own from Tyson Jost.

From there it was all Vegas. The Golden Knights controlled play in the second and third periods, but only Reilly Smith’s partial breakaway beat Philipp Grubauer, who made 39 saves in the victory.

The Golden Knights finished with a 41-25 edge in shots on goal.

Many thought the Golden Knights and Avalanche were the best teams in hockey this season. They played the kind of 60 minutes worthy of the hype, and treated the fans in attendance with at least a little more than that.

The Avalanche scored twice in the first, Vegas had a goal in the first and the second and the third came and went without a goal, sending Game 2 of the second-round series to overtime in a 2-2 draw at Ball Arena on Wednesday.

The Golden Knights brought their momentum from the second period into the start of the third, firing five shots on goal and hitting two posts in the opening two minutes, then had a breakaway in the next minute.

The Avalanche settled things down a bit after that, but not by much. The Golden Knights either had the puck, or were forcing the Avalanche to dump and chase for much of the third.

Vegas took a penalty eight seconds past the midpoint of the period to put the Avalanche on the power play, and they almost had it. They whipped the puck from point to point with ease, and Gabriel Landeskog very nearly finished a tap-in that would have out Colorado on top.

But the Golden Knights had the best chance of the power play on a short-handed break by William Karlsson. He drove to the net to create a rebound and Reilly Smith clanged iron for the second time in the period. Alex Tuch had a breakaway coming out of the box, but Philipp Grubauer made a spectacular glove save to keep the game tied.

The Golden Knights had one last chance to end the game in regulation when Alex Pietrangelo drew a trip with 3:21 remaining. Vegas managed four shots on the man advantage, but Grubauer continued to stand tall.

Vegas led 40-23 in shots on goal through regulation.

But the GIt took some time, but the Golden Knights arrived to this series in the second period.

For the first time Vegas was the aggressor, controlling the puck and pushing play, and was rewarded with the equalizer. Reilly Smith scored the only goal of a ferocious second period, and Vegas and the Avalanche went to the second intermission in a 2-2 tie at Ball Arena on Wednesday.

The Golden Knights came out flying in the second period, spending the first three minutes or so almost entirely in the offensive zone. The team that was chasing the Avalanche for the first four periods of this series morphed back into the possession monster it was against the Wild, and matched its first-period shot total in the first 10 minutes of the second.

It paid off at the 10:28 mark of the second. The pressure created a turnover in the neutral zone, and Jonathan Marchessault zipped the pass across the ice. Smith was there to collect and walked in alone on Philipp Grubauer, reached down and pulled out a slick move and beat him with a backhand to even the score 2-2.

The rest of the period played out the way everyone who wanted this series to happen all year hoped it would. Each inch of ice was contested, and team’s traded chances for the final minutes or so of the frame. Grubauer and his counterpart on the other side of the ice, fellow Vezina Trophy finalist Marc-Andre Fleury each had to make a couple of key saves to keep the game today.

The puck was on the Golden Knights’ sticks for much of the period though, and finished with a 16-6 edge in shots on goal as a result, putting them up 25-17 for the game.

It wasn’t a bad first period for the Golden Knights, if only they could have stayed out of the box.

The Golden Knights took four penalties in the first period, and gave up a goal on one of them, falling behind the Avalanche 2-1 after a period at Ball Arena on Wednesday.

Game 2 started off almost identically to Game 1. Colorado held Vegas off the shot sheet in the early-goings, then scored a few minutes in. It was a bit of a goofy goal, with Brandon Saad whiffing on the shot and it sliding through the crease, but it caught Marc-Andre Fleury by surprise and ended up in the net at 3:39.

The defensive breakdown in the neutral zone is where the Avalanche capitalized, as Samuel Girard’s seam pass allowed Saad to enter the zone untouched on a breakaway.

The Golden Knights even took a penalty not long after. They killed it off, but it was a mess of a start, but they did find their footing.

Special teams can get a team going. Immediately after killing the Avalanche power play the Golden Knights got one of their own, and used it to tie the game. Alec Martinez posted up in the right circle and when Max Pacioretty’s cross-ice pass found him, Martinez blasted it into the net at 9:32 to make it 1-1.

Vegas killed off Max Pacioretty’s holding minor later in the period, but you can only afford to give Colorado so many chances. The Avalanche made them pay for Jonathan Marchessault’s slash, as Tyson Jost ripped a one-timer from the slot that beat Fleury at 17:08 to restore Colorado’s lead.

Shea Theodore took one more penalty, a puck-over-glass delay of game, in the final minutes of the period.

Colorado led 11-9 in shots on goal in the first period.

Golden Knights depth to be tested in Game 2 against Avalanche

The Golden Knights will take on the Avalanche in Game 2 at 7 p.m. with two different forwards and a different goalie than Game 1.

It’s not all by choice. While the Golden Knights used Game 1 as an opportunity to rest Vezina Trophy finalist goalie Marc-Andre Fleury, who is expected to start tonight, the forwards were not optional. Mattias Janmark is doubtful with an injury sustained during Game 1, while Ryan Reaves will serve the first part of his two-game suspension he was issued after the first game.

The Golden Knights all postseason have praised their depth, and with two bottom-six forwards expected to miss the game at Ball Arena, it will be tested against Colorado.

“I think that’s going to be a huge part of it. We need everybody,” forward William Karlsson said. “If we can have four lines going it’s going to help the team in a massive way. I have no doubt, I think they’re excited to be in the lineup and I think they’re going to do well.”

In Reaves’ spot, the Golden Knights are expected to return to rookie Keegan Kolesar, who played the first six games of the first round but was the lineup casualty when Max Pacioretty returned. He has two points this postseason, both of them assists in a Game 4 win last round.

“He’s got a good shot, he’s making plays, he’s confident with the puck, he’s a really good player and he’s going to be a good addition for us,” said forward Nicolas Roy, who is projected to center the third line with Sikura. “We’re three guys that can make plays, be on their forecheck, be on their ‘D.’ So I guess be tough to play against, be in the offensive zone as much as possible and create some chances there.”

The Golden Knights hope to shake off that Game 1 loss, a 7-1 defeat that was the most lopsided in the team’s postseason history. The Avalanche, on paper, are the best team the Golden Knights have ever met in the postseason, and Colorado’s best players ran wild on Vegas — a combined 12 points from forwards Nathan MacKinnon, Mikko Rantanen, Gabriel Landeskog and defenseman Cale Makar.

Golden Knights coach Pete DeBoer laughed when asked how to slow down the Avalanche stars.

“Well maybe because there’s seven of them, that might have something to do with it,” DeBoer said. “You’re not shutting down one guy or two guys. They’re literally that deep in elite offensive players.”

Vegas will look to counter with its own elite offensive players, who were held mostly silent in Game 1. Karlsson had a goal once the game was already 5-0 in Colorado’s favor, but Max Pacioretty and Mark Stone, who combined for 14 points in the regular season against the Avalanche, had just one assist.

Vegas was good at Ball Center in the regular season with a 2-1 record including a 3-0 shutout in the first meeting, but the Avalanche are on another level at home — a 25-4-2 record, including the postseason.

The Golden Knights have never lost a Game 2 after losing Game 1 of the series. They are 4-0 all-time, including last round against the Wild. They are 2-2 in a series where they lose Game 1.