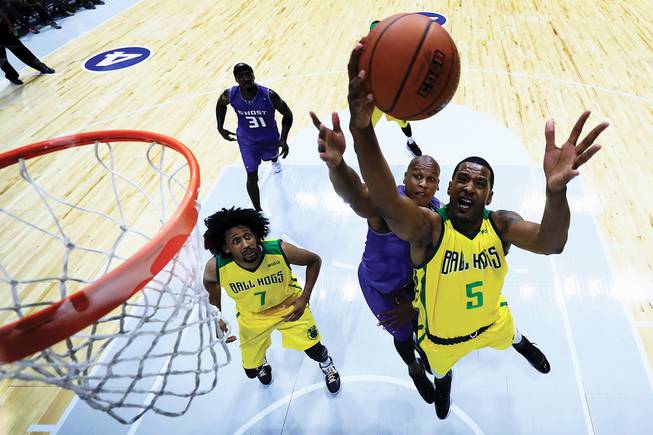 Dominic McGuire (5) of the Ball Hogs grabs a rebound while being guarded by Mo Evans of the Ghost Ballers during a BIG3 game July 9, 2017, at the BOK Center in Tulsa, Okla.

Ice Cube and Jeff Kwatinetz have spent 25 years as business partners but say they may have never encountered a more painful decision than canceling last year’s planned Big3 season out of coronavirus concerns.

The league had caught on in its first three years with its unique brand of 3-on-3 basketball, now officially dubbed “Fireball,” that features components like a 4-point shot circle and a format that awards victory to the first team to reach 50 points. Cube and Kwatinetz, the league’s co-founders, were certain the 2020 season was going to be the best yet with new rules including a lowering of the minimum player age from 27- to 22-years-old and a “Bring the Fire” twist.

• Games broadcast on CBS. All 12 teams play one game each week. Capacity restrictions and ticketing information to be announced soon at big3.com/schedule.

“Bring the Fire” allows each team, once per half, to challenge a foul call and enact a one-possession one-on-one showdown.

It’s a year late, but the fourth season is finally happening. Big3 is holding its final offseason event on Friday June 4 at Tarkanian Basketball Academy, a combine where the league’s 12 coaches can evaluate incoming talent to fill out their rosters.

A draft will follow before play begins Saturday July 10 at Orleans Arena and continues through a Sept. 4 championship at a to-be-determined location.

We caught up with Cube and Kwatinetz to chat about the upcoming season and Big3’s place in the local sports scene.

Was there ever any doubt Big3 would return after last year’s cancellation?

Kwatinetz: We knew we would be back. Cube and I had been through so much to make this dream a reality and that really took a lot of wind out of our sails, but we regrouped. It was an emotional letdown but it’s hard to complain because everyone went through it.

Cube:No doubt in my mind because we canceled because of uncertainty with COVID, not anything we did wrong. It was a pandemic the whole world had to deal with. If it was something we did wrong that was our fault then I would have some doubts but it was beyond our control.

Even without a pandemic, most new leagues last one, maybe two, seasons. How have you built enough interest to sustain this long?

Cube: I think our entertainment background really sets us apart from other people. Other people who try leagues are more sports people but with us being from music, movies and television who are also diehard sports fans, we take Fireball very seriously. That’s our motto: Take the game serious but nothing else. Have fun with everything else.

What are the origins of the new “Bring the Fire” rule?

Kwatinetz: When you watch basketball games, you always dream of certain players going one-on-one against each other, and that’s often how games are marketed — LeBron versus Steph Curry, or this player versus that player. In our league, you can actually see that. Those things will happen.

Cube: It might be sacrilegious for some basketball people, like, “What the hell is this? How dare they add a new wrinkle into basketball? Who the f*ck do they think they are?” But the kids were calling this fireball when they played on the street, so we said, “Let’s adapt that name and lean into it and have a new sport.” We have the liberty and leeway to bring in new rules. It’s like the UFC did things a little different than boxing.

What’s behind the decision to hold most of this season in Las Vegas?

Cube: The city has welcomed the league from Day 1. We had our first combine, draft and championship there when no one knew if it was going to work. And it’s a big sports town now as we see with the Golden Knights, the Aces and the Raiders and it’s just right for us to come back there. If we have to be in one city more than three or four weeks, Vegas is a no-brainer.

What do you consider the best moment in the history of Big3 so far?

Kwatinetz: I’d say the three greatest moments were the finals of each year and seeing how important and meaningful it was for the teams to be champions, and especially the coaches. To see (WNBA legends) Nancy Lieberman and Lisa Leslie win as coaches was incredible. It was a sense of accomplishment because we only had coaches who we think can win, and when we asked Nancy to be a coach (of Power in 2018), we did it because she was the best available, but there were naysayers saying we just did it to be different. We weren’t trying to be different. We were trying to do the right thing and pick the best of the best. The vindication of having Nancy and Lisa win was amazing, and then Rick Mahorn the first year, that was special, too, because the season came together so well and that team (Trilogy, led by Rashad McCants and Al Harrington) was so special.

Cube: Nancy Lieberman winning a championship in the second year was profound because it was a case study. People were wondering if women coaching men could ever work and blah blah blah. Well, we did it and it was super legitimate because she won Coach of the Year, too. That’s not a league or PR move. Julius Erving, Gary Payton, George Gervin, Rick Mahorn—those guys voted her the best coach.

Who are the teams or players to look out for this year?

Kwatinetz: It’s always hard to tell who’s going to be the breakout star each year, but I’m really excited to see Nick Young (on Enemies) and Jarrett Jack (on Trilogy) and excited to see Joe Johnson (on the Leslie-coached Triplets) defend his title. He was so amazing to watch in the third season.

Cube: I would look out for Bivouac adding Marreese Speights to their roster with Josh Smith and Will Bynum. I would watch Enemies adding ‘Swaggy P’ (Young) but it’s going to be hard to take the Triplets down. That’s a formidable group. We’ll see. If some of these teams draft well, they might have a chance.

Blog: Golden Knights fall in OT of Game 2 to Avalanche