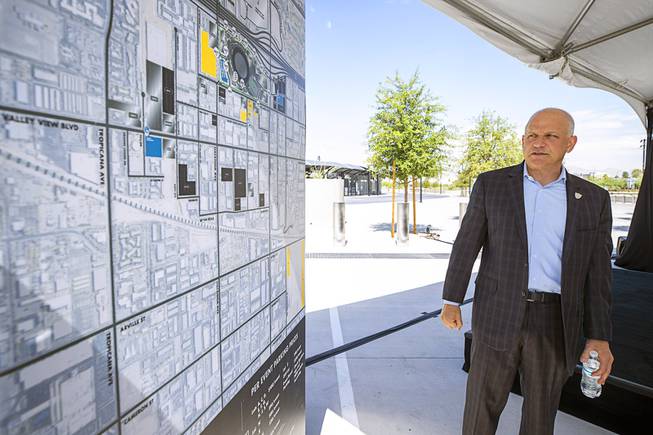 Las Vegas Raiders President Marc Badain stands by a map of parking lots during a news conference outside Allegiant Stadium Thursday, June 3, 2021. Badain announced details of the Allegiant Stadium transportation and parking program for the 2021-22 season.

There will be 65,000 football fans at Allegiant Stadium for a Raiders game day in a few months. Before that, the nearly $2 billion venue will host a pair of concerts that are expected to draw capacity crowds.

The challenge for which team and local officials have long planned: Getting people to and from the stadium, and doing so in an efficient manner.

The Raiders revealed their strategy today, and include plans for a third of the fans walking to the facility from Strip properties, others taking Regional Transportation Commission buses, and still more getting parking spots at or near the stadium.

With that said, the plans are very fluid, team officials stressed.

“We’ll learn from every event,” Raiders President Mark Badain said. “There will be feedback from fans and we’ll learn from that. We’ll try to address every concern that we can address.”

About 22,000 fans indicated in surveys that they expect to park in garages along the resort corridor before walking across the Hacienda Avenue bridge over Interstate 15. That way of accessing the stadium is encouraged, officials said.

Badain made his comments during a presentation of the team’s parking plan, a living document that will first be tested next month when Allegiant Stadium plays host to a pair of concerts — Illenium on July 3 and Garth Brooks on July 10.

“Parking is a big part of the game-day experience,” Badain said. “If our survey data holds true, we’ll expect about a third of the traffic coming in from over the Hacienda bridge. The rest will be scattered over (team-controlled) lots, shuttles, ride share, buses and those types of things.”

Badain said more than 35,000 parking spots will be available within a 1-mile walk of the stadium, which sits just across I-15 from Mandalay Bay. Ride-share drop-off lots will be designated at areas to the east, south and northwest of Allegiant Stadium, which will allow fans access to the stadium via a short walk. The nearby Russell Road bridge over I-15 will not be closed to traffic during Raiders game days.

An area west of the stadium, near West Diablo Drive and South Procyon Street, will be designated for taxis, shuttles and “general drop-off and pick-up” on event days, according to the team.

At least 6,500 parking spots in lots near the stadium will be designated for those who wish to tailgate before games. Those spots will range in price from $40 to $100, with an average price of $75. Badain said that price point is in line with most other National Football League stadiums. Season parking passes will go on sale this month, with Southern Nevada personal seat license holders and club seat customers given top priority, team officials said.

Badain added that the Regional Transportation Commission of Southern Nevada’s Deuce bus will also likely be an attractive option. The double-decker buses run 24/7 from North Las Vegas through the Strip tourist corridor, making nearly 60 stops along the way. The closest stop the bus makes to the Hacienda bridge is at Mandalay Bay.

“It will take a village to make sure there’s multiple modes available to get people to the stadium,” said M.J. Maynard, CEO of the transportation commission. “We’ve been operating the resort corridor for years. We have a lot of transportation professionals and event professionals. This is going to be another day at the office, but we will also have the ability to scale. If lots of people are taking (the Deuce), we’ll have additional buses waiting to get out there.”

Resorts along the south end of the Strip are expected to announce additional parking and tailgating areas near the stadium as the summer goes on.

Chuck Bowling, president and chief operating officer of Mandalay Bay and the Luxor, said MGM Resorts International properties will make “as many parking decks up and down” Las Vegas Boulevard available as needed for stadium-goers on event days.

He said more will be announced about some of those parking options later this month.

“What we want to create, and we’ve already started this, is a weekend experience surrounding Raiders games,” Bowling said. “We want people to go to a concert or pep rally the night before a game. We believe we’re absolutely part of the stadium district and we want to create traditions for people.”

Last month, MGM announced what it’s calling a “Stadium Walk” concept, which will include a Bud Light Beer Garden tailgate party area near the corner of Hacienda and Las Vegas Boulevard.

The Raiders are scheduled to take the field at Allegiant Stadium for their first preseason game Aug. 14; the organization expects to have a full venue for the 2021 NFL season, Badain said. The maiden season in 2020 was played without fans.

“We had additional time to acquire properties, so I guess you could look at that as a benefit if you wanted to find a silver lining,” Badain said.