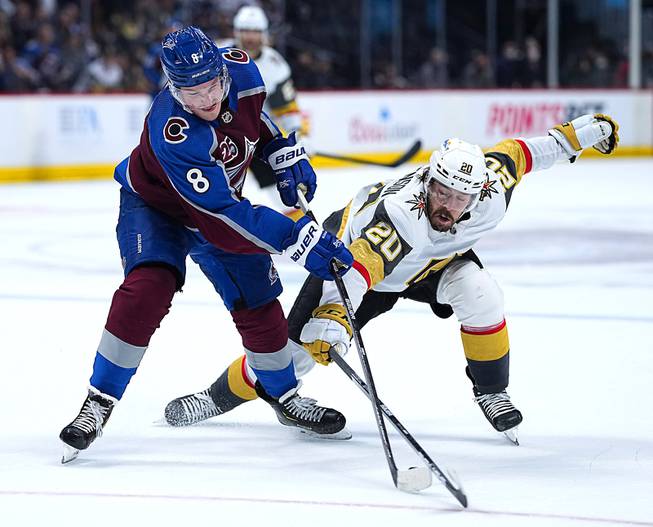 The Colorado Avalanche, with their stable of offensive talent, naturally have a pretty good power play. The Golden Knights have seen what that unit can do far too often in this series.

Vegas held the Avalanche to just one power-play goal in 21 opportunities in the regular season but have already given up four goals on 11 chances in the first two games of the series. The Golden Knights’ penalty kill, the top-rated unit in the league in the regular season, has had its work cut out of it so far in the second round, and the Golden Knights will look to limit the Avalanche power play in Game 3 at 7 p.m. today at T-Mobile Arena.

“Their power play is really good for them. They got two goals for them last game, a couple the game before that,” Vegas forward Keegan Kolesar said. “They have a very dangerous power play, so we’ve got to do everything we can to stay out of the box.”

Part of allowing the four power-play goals is having an extra man in the box 11 times, an uncharacteristic number for Vegas.

The 11 power-play chances Vegas has given the Avalanche is the most by any team in the second round. Putting Colorado on the power play at least five times a game is a recipe for disaster, even with a regular season penalty-killing unit that was successful at a league-best 86.8% clip.

“We’ve got to do a better job,” coach Pete DeBoer said. “Our PK depth has been tested with (Tomas) Nosek and (Mattias) Janmark out of the lineup, and the guys that are getting some of those minutes in place of those guys have got to get the job done for us when they get in there.”

The Golden Knights are expecting the same lineup as Game 2, with one possible exception. Alex Tuch did not take the ice for morning skate, putting his status for tonight into question. DeBoer said Tuch and everyone else not on the ice for practice are game-time decisions.

If Tuch can’t go, the Golden Knights will turn to Cody Glass, who skated in his spot at practice. Glass made his postseason debut in Game 6 against the Wild, and if he skates on the third line with Dylan Sikura and Nicolas Roy, that will form a line with 31 combined games of postseason experience. Roy has provided 29 of those.

Marc-Andre Fleury is expected to start after saving 22 of 25 shots in Game 2. The Vezina Trophy finalist started all seven games of the first round but did not play Game 1 when Vegas allowed a franchise-high seven playoff goals.