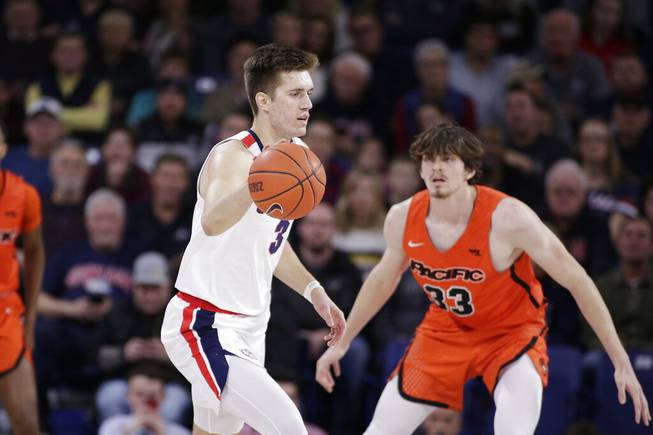 Gonzaga forward Filip Petrusev (3) dribbles while defended by Pacific center James Hampshire (33) during the first half of an NCAA college basketball game in Spokane, Wash., Saturday, Jan. 25, 2020. Hampshire has transferred to UNLV, where he will have two seasons of eligibility.

The UNLV basketball roster is set for the 2021-22 season.

James Hampshire, a 7-foot-1 center, is transferring to UNLV from the University of Pacific and will take the final scholarship spot, the program announced. Hampshire, who will have two seasons of eligibility, will provide the Rebels with backcourt depth and interior defense.

During the 2019-20 season, Hampshire tallied 43 blocks, which was second best in the West Coast Conference. He shot 67.1% from the field in averaging about 15 minutes per game. He averaged 3.7 points and 4.4 rebounds per game.

“He is an excellent athlete with great size and we are excited about his shot-blocking ability and the rim protection that he offers,” UNLV coach Kevin Kruger said in a news release.

Originally from Flagstaff, Ariz., his collegiate career started at Casper College in Wyoming.