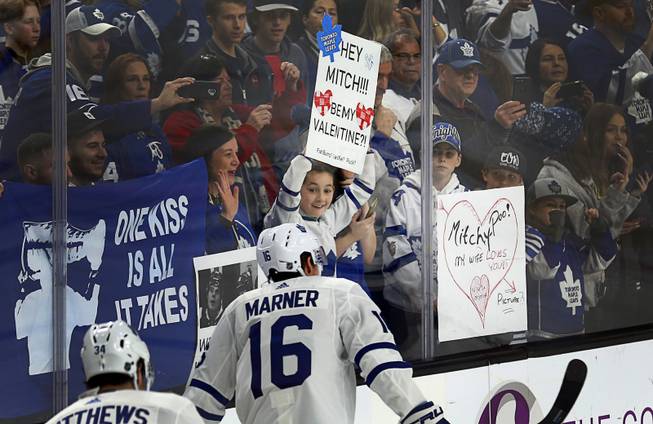 A fan holds a Valentine’s Day greeting for Toronto Maple Leafs right wing Mitchell Marner (16) before during a game against the Vegas Golden Knights at T-Mobile Arena Thursday, Feb. 14, 2019.

The curse struck again and counted weekend wagers’ bankroll among its casualties.

After snagging the Maple Leafs at -120 to beat the Canadiens in the teams’ first-round series following a Game 1 loss, I was all but already adding another win to the bottom line when Toronto took the next three straight. Then, of course, the Maple Leafs’ checkered history struck again and they lost three in a row to an overmatched Canadiens team to make it 18 straight seasons without advancing out of the first round.

That was a topper to a recent downturn in picks, which also included a less defensible failed series bet on the Portland Trail Blazers from the same column two weeks ago, that seemingly can’t get any more painful. Luckily, I built a nice profit cushion through football season and futures to be in no imminent danger of falling into the red.

But the urgency is now ramped up as I look to turn things around. Unlike the Maple Leafs, I don’t have to wait until next season.

The Islanders played as well as they could in Game 3 against the Bruins — and still lost in overtime. The Bruins closed -150 in that game, and there’s no reason they should be available at 10 cents cheaper for Game 4. And they won’t be long, so jump on this price while it’s available. Boston’s power ratings are a little deflated because of an up-and-down regular season, but they’re healthier and playing at a higher gear in the playoffs. New York could prolong this series if it can keep up the efficiency of its Game 3 attack, but that’s doubtful with how much of an advantage Boston’s roster provides from top to bottom. This series wrapping up in five games might be the likeliest outcome.

Milwaukee Bucks’ Giannis Antetokounmpo is shown in a game against the Miami Heat Friday, Sept. 4, 2020, in Lake Buena Vista, Fla.

Welcome to the de facto NBA Finals. I don’t see any team beating the winner of this series, and yes, that means I think either team could win. Brooklyn should be favored to win the series, but probably not quite all the way to -200 where it currently sits. That extends to the single-game market where -4 feels a bit pricey. I’d make this closer to Brooklyn -3 and don’t think either team should currently be favored by more than a single possession regardless of location. Giannis Antetokounmpo creates severe matchup problems for the Nets. Yes, the Nets create matchup problems for everyone but don’t discount the Bucks’ chances. Let’s say Brooklyn survives a series that goes the distance after some early scares — including in today’s Game 1.

Oakland starter Cole Irvin has confounded the betting market all season, and his success shouldn’t stop here. The third-year lefty is pitching better than he ever has before and bettors collectively haven’t caught on, helping to keep his prices low. Irvin may well regress as the season goes on, but Coors Field surprisingly looks like an unlikely place for a decline to begin. That has more to do with the team than the venue, though, as the Rockies just don’t have the offense they’ve had in past years this season. And even if they do knock Irvin around, the A’s should have no problem scoring runs of their own against Colorado’s lefty starter Kyle Freeland. Irvin has been better than Freeland, and Oakland has hit left-handed pitching better than Colorado. This line should be higher.

Let’s try something new and join in on the onslaught of chalky moneyline parlays on UFC events. Eight of 14 fights on this weekend’s card feature a favorite of at least -200, meaning sports books will be totally inundated with such wagers. They’re also likely to clean up on them considering there are some obvious parlay-busters among that group, i.e. I wouldn’t want to lay big prices on Makwan Amirkhani against Kamuela Kirk or Mason Jones against Alan Patrick. De La Rosa and Breese, on the other hand, I struggle to see losing. They’re both around -250 but that feels too short. De La Rosa should overwhelm opponent Ariane Lipski with her wrestling. And Breese is superior to his opponent Antonio Arroyo in every area. A two-leg parlay to cut down the juice doesn’t look all that misguided in this instance.

Regardless of the track or package, Hamlin has dominated this season. The same has not been true of Larson, even though he’s driven the fastest car. Larson hasn’t been as overpowering with either the 750 horsepower package or on road courses — both elements that will be in play on Sunday in Somona. Larson has the pole, which could be more valuable than usual with the lack of passing but Hamlin is starting nearby in fourth position. It would take a big break in what we’ve seen all year for Larson to finish ahead of Hamlin and there’s no reason to believe that will happen.