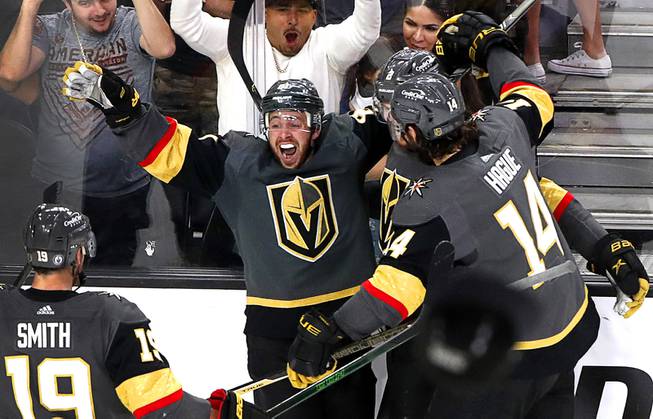 It takes about six minutes for the crew at T-Mobile Arena to clear off hundreds of hats from the ice.

They gladly sprung into action Sunday night after Jonathan Marchessault’s third goal found twine for the Golden Knights against the Colorado Avalanche, sending most of the 18,081 fans into a frenzied celebration.

That included many — in following a hockey tradition when a hat trick is recorded — tossing their Golden Knights’ hats onto the ice. Even backup goalie Robin Lehner joyfully threw his hat onto the ice.

“Night in, night out it doesn’t matter who scores or everything. If we win as a group that’s most important,” Marchessault said. “We proved we can play with the best team in the league and we’re on a mission right now.”

The success of Marchessault, William Karlsson and Reilly Smith — the Misfit Line as they’re affectionately known, stemming from the Golden Misfits team of 2017-18 — is no accident. It’s a by-product of game-planning.

At 5-on-5, that line was hilariously dominant. In 8:31 of ice time with them on the ice, the Golden Knights led 14-3 in shot attempts, 12-1 in scoring chances and 7-0 in high-danger scoring chances, according to Natural Stat Trick.

And that doesn’t even factor in Marchessault’s second goal, a power-play tally in the second period. They feasted on Colorado’s second line of Joonas Donskoi, Tyson Jost and Valeri Nichushkin.

That’s because Colorado’s top line was occupied elsewhere. After a Game 1 in which Karlsson’s line struggled to contain Gabriel Landeskog, Nathan MacKinnon and Mikko Rantanen, the Golden Knights shook things up and did what they could to get their own top line of Max Pacioretty, Chandler Stephenson and Mark Stone out against the Avalanche stars.

The first is that the Stephenson line has outplayed MacKinnon’s by a good margin, including on Pacioretty’s second-period goal Sunday. MacKinnon, Landeskog and Rantanen have been bottled up, and have come nowhere near matching the eight combined points they had in Game 1.

The second way it’s worked is even more impactful — if MacKinnon’s line is out against Stephenson’s, who is going to defend the Misfits?

That’s been the key to the series turnaround, as Marchessault, Karlsson and Smith have combined for five 5-on-5 goals in the last three games. In Game 4, Marchessault had the three goals, but Karlsson had three assists and Smith had one.

“Look at the way (Stephenson, Pacioretty and Stone), they played against the best line in the NHL and they’ve done an amazing job and they keep producing while they’re doing a great job against the top three guys there,” Marchessault said. “It’s a big advantage, but next game it might be different matchups. As a group we’ve got to answer the bell and just get the job done.”

It’s a hockey cliché about getting pucks deep, but the Golden Knights didn’t allow the Avalanche to do that almost at all.

Colorado is a fast, skilled team that seemed loathe to dump-and-chase Sunday in favor of carrying the puck into the Vegas zone with control. It resulted in forwards running into a wall the Golden Knights created at the defensive blue line, the puck coming off the attackers’ sticks, and Vegas countered with a rush of its own.

The Golden Knights had no qualms about sending the puck in deep and getting it back. They didn’t come directly off chips from the blue line, but Marchessault’s first and third goals came as a result of a forecheck creating pressure the Avalanche couldn’t answer.

“I think we’re kind of smart with the puck,” Karlsson said. “When there’s plays in the neutral zone we take it. You chip it in and go to work, and it’s working.”

So much worked for the Golden Knights on Sunday.

Their forecheck kept the puck in the Avalanche zone, allowing only 18 shots on goal, a season-low for Colorado. The Golden Knights had no issue exiting the zone, as two of their goals — Pacioretty’s in the second period and Patrick Brown’s in the third — came off rush chances that started near the Vegas nets.

Brown’s initial shot went off Philipp Grubauer’s chest, but the Colorado goalie couldn’t stuff it, and the puck trickled down and into the goal as Grubauer slid into the cage.

There was no call on the ice despite the puck being in the net and the crowd going wild, then officials huddled and ruled it a goal, firing up the crowd again. Colorado challenged for goalie interference, but the call on the ice stood, raising the decibel level in the arena one more time.

Brown’s goal didn’t play much of a role in the game, extending the lead 5-1 with 6:47 to go, but it allowed a crowd in attendance for a party to celebrate the same goal three times.

“I was just pumped,” Brown said. “(William Carrier) and (Ryan Reaves) made a great play up the ice and I was able to finish with them. They were able to celebrate three times too, so that was fun.”

The fans got to celebrate Marchessault goals three times. He was a point-per-game player in the playoffs his first two years with the Golden Knights, then mustered just three goals and 10 points in 20 postseason games last year.

Coach Pete DeBoer said that bothered him. He didn’t score and had one assist in the Western Conference Final loss to Dallas last season, and DeBoer said he was determined to come into this year with a vengeance.

So far, so good. His five goals this postseason lead the Golden Knights and his seven points are behind online his linemate Karlsson and captain Stone.

The Golden Knights turned a 2-0 series deficit into a best-of-three series with two victories at home. They can thank a lot of the little things for that to be sure, but it doesn’t hurt when the three players DeBoer called the “identity of this franchise” produce, and a motivated player records the third postseason hat trick in team history.

“I think that line, I remember during the season them having some moments where — they also play well, they always play hard, they’re always defensively responsible — but the puck wasn’t always going in at different points for them,” DeBoer said. “They’ve gotten hot at the right time, and they look unstoppable right now.”