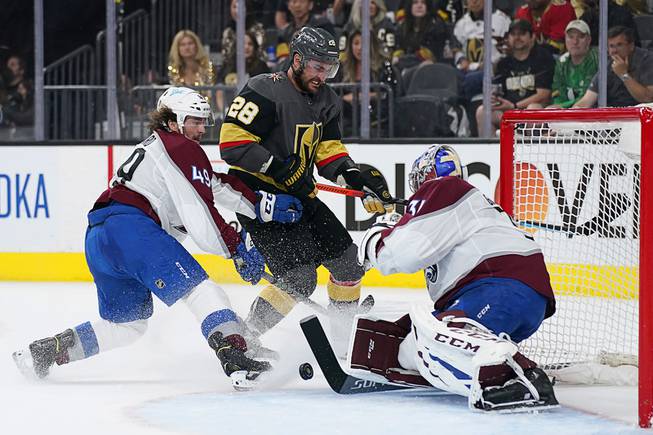 The Golden Knights are pleased with their two victories at home in Games 3 and 4 to even up the second round at two games apiece, but they know it’s a new series now.

The Golden Knights also realize the importance of getting home and mentally resetting after two losses, doing just that last week. The best-of-seven series has come down to a best-of-three, with two games at Ball Arena in Denver, statistically one of the hardest buildings in the league to win in this year. Vegas will have to win here at least once to advance and will get its first chance at 6 p.m. in Game 5 against the Colorado Avalanche.

“We’ve won in this building before,” Vegas forward William Carrier said. “We’ve just got to play a smart game.”

Colorado went 22-4-2 at home in the regular season, though one of those credited “home” games came at Lake Tahoe. Still, six losses all year at home is impressive, and then the Avalanche went and won their first four home games of the postseason.

As Carrier mentioned, though, the Golden Knights were alright at Ball Arena in the regular season. They went 2-1 in this building and outplayed Colorado in a 3-2 overtime loss in Game 2.

Based on morning skate, it appears the Golden Knights will be making some lineup changes ahead of Game 5, including the potential of a surprise scratch.

Forward Mattias Janmark returned to the ice this morning for the first time since he left Game 1 of this series with an injury, and defenseman Nick Holden did not remain on the ice with the extras after practice. Both are indicators they could return to the lineup.

Skating with the extras were Nicolas Hague — who looks in line to sit for Holden — and Ryan Reaves, who has not been scratched from a playoff game since 2018. He’s missed four playoff games in the last three years: three to suspension and one to the league’s COVID list. He returned for Game 5 after a two-game suspension and could be looking at his first healthy scratch under coach Pete DeBoer.

Lineups will be confirmed during warmups tonight.

Janmark’s return will be a boost to Vegas, which acquired him at the trade deadline and saw him lead the team six points in the first round against the Wild, including a Game 7 hat trick. Though the Golden Knights did not take line rushes during their optional morning skate, if Janmark plays, he is expected to return to the third line with Nicolas Roy and Alex Tuch. With Reaves a potential scratch, that would set up a fourth line of William Carrier, Patrick Brown and Keegan Kolesar.

Marc-Andre Fleury is expected to start in net. He has played every game of the postseason except for Game 1 against the Avalanche and has registered a 6-4 record with a .924 save percentage and league-best 1.79 goals-against average.

The Golden Knights have only ever played one Game 5 with the series tied, and they defeated the Sharks in 2018 and won the series in six games. They are 3-5 all-time in Game 5 of a series.