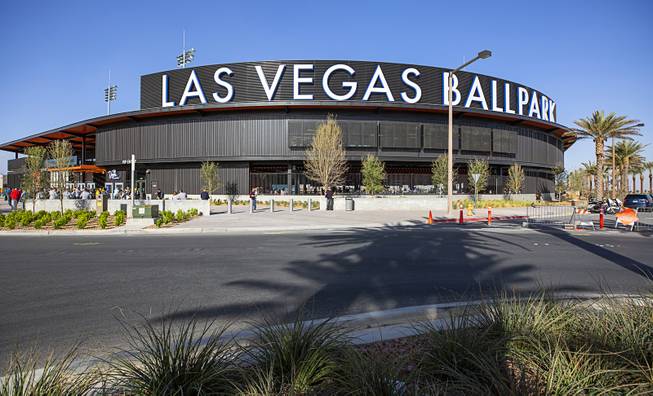 An exterior view of the Las Vegas Ballpark in Summerlin before the grand opening Tuesday, April 9, 2019.

The Las Vegas Convention and Visitors Authority could move today to initiate arbitration proceedings with the owners of the Las Vegas Aviators over a stadium naming rights deal.

The authority is at odds with the Howard Hughes Corporation, which owns the minor league baseball franchise, over a naming rights agreement for Las Vegas Ballpark, the Summerlin home of the Aviators, according to LVCVA board of directors meeting documents.

Per the deal, the LVCVA is obligated to make four annual payments, totaling $4 million, to Clark County Las Vegas Stadium LLC, the entity that owns the ballpark under the Howard Hughes umbrella.

As part of the agreement, the operator of the ballpark, which can seat up to 10,000 spectators, is required to host at least 100 events each year, according to the LVCVA.

In 2020 — a pandemic year when large gatherings were largely banned or discouraged — Howard Hughes failed to meet that obligation, the LVCVA said.

The authority wants a discount on its payments based on the number of events at the ballpark last year.

Attempts to “negotiate a resolution to the dispute have not been successful,” according to LVCVA documents.

A representative for the Howard Hughes Corporation did not immediately respond to a message early today.