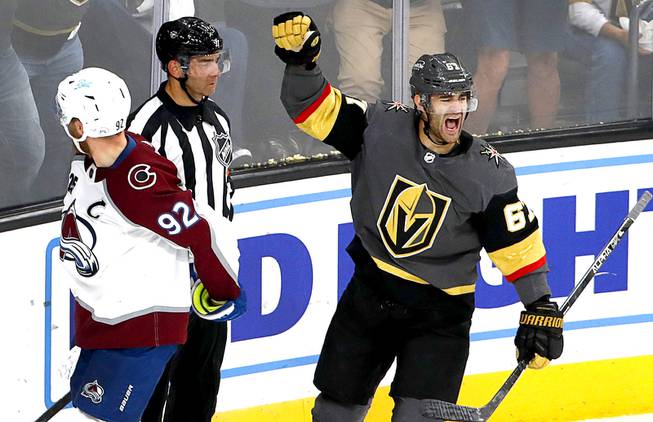 The Golden Knights are going to the Stanley Cup semifinals for the third time in four years as a franchise.

The Golden Knights responded to two losses to open the second-round series with the Avalanche by winning four consecutive games and clinching the series on home ice in Game 6 with a 6-3 victory at T-Mobile Arena on Thursday.

Vegas will play the Montreal Canadiens in the Stanley Cup semifinals. Game 1 is Monday at T-Mobile Arena.

The Avalanche scored first for the fifth time in six games, but for the third time in the series it didn’t matter. The Golden Knights answered Devon Toews’ goal 23 seconds into the game 52 seconds later on a Nick Holden slider than Philipp Grubauer never saw. William Karlsson added a one-time blast near the end of the period, and Vegas left 2-1 after a period.

The second is where the game went from fun to incredible. The Avalanche controlled much of the period and through 15 minutes of the frame, Mikko Rantanen’s early goal to tie it consisted of all the exercise the lamp behind the net had. But three goals in the final five minutes put T-Mobile Arena on its feet.

It’s also when Alex Pietrangelo started to take over the game. He put an offering right on Keegan Kolesar’s tape in the front of the net and Kolesar did the rest to deflect it in and put Vegas back on top. After Andre Burakovsky retied the game at 3-3 for Colorado, Pietrangelo scored himself, crashing the net and putting home a shot off the rebound with 18 seconds left in the period.

The third period saw the Avalanche’s last-gasp push, but it turned into a victory lap for the Golden Knights. William Carrier scored on a deflection with 8:14 to play, and Max Pacioretty sealed with an empty-net goal with 3:10 to go.

The Avalanche won the President’s Trophy as the best regular-season team and were facing elimination in the second round. They weren’t going to go down without a fight, but the Golden Knights had no intention of letting this series last another game.

The Avalanche and Golden Knights went blow-for-blow in the second period, with each side netting a pair and Vegas coming out on top with a 4-3 lead after two periods at T-Mobile Arena on Thursday.

The Golden Knights have developed a nasty habit of firing the puck over the glass this series. Alex Pietrangelo did it again 2:23 into the second, the fifth game in a row it’s resulted in a delay of game penalty.

This one proved costly. Mikko Rantanen teed up and fired through Zach Whitecloud’s legs and clipping just enough his skate to change direction and get by Marc-Andre Fleury to tie the game 2-2 on the power play at 3:47.

The Avalanche rode the momentum of the goal through much of the period. They had the first seven shots of the frame and kept the Golden Knights in the defensive zone for much of it. It looked similar to the second period of Game 5, where the Avalanche tilted the ice but came out of it with just one goal.

This time though, Vegas didn’t wait until the third to response. Keegan Kolesar won a faceoff in the offensive zone late in the second period and crashed to the front of the net where he awaited Alex Pietrangelo’s shot. Kolesar’s faceoff went right to Shea Theodore, who slid to Pietrangelo for the blast, and Kolesar deflected it just inside the near post to restore Vegas’ lead at 3-2.

Vegas had one more trick up its sleeve in the period. Alex Tuch fired one wide in the final seconds, but Pietrangelo was there on the rebound. He drifted to the front of the net and put back the rebound by Philipp Grubauer and gave Vegas a 4-3 lead with 18 seconds left.

Vegas trailed 22-16 in shots on goal, but ended the period 20 minutes away from a second-round victory.

Each team scored in the first 90 seconds of the game and kept the pace going for 20 minutes. At the end of it, the Golden Knights led 2-1.

The Avalanche capitalized on early Shea Theodore giveaway, and he gave it away to the wrong person. Nathan MacKinnon picked up the puck in the neutral zone to create a 2-on-1 and he found a teammate wide open on the other wing. Devon Toews caught the pass, then whipped it by Marc-Andre Fleury for a goal and a 1-0 lead 23 seconds in.

And as karmic justice for the bizarre goal that stung Fleury in Game 5, Philipp Grubauer had an equally tough one. The Golden Knights rimmed the puck around to the boards to Nick Holden at the point, but Grubauer seemed to not see the pass, much less the shot. Holden through it at the end, and it beat a standing Grubauer five-hole at 1:15 to tie the game.

It didn’t slow down from there either. Alex Tuch had a partial breakaway and Alec Martinez hit the post, all within the first five minutes. At the first TV timeout just past the six-minute mark, there were 12 shots on goal: seven for Colorado and five for Vegas.

William Karlsson made sure the period didn’t end quietly either, putting the Golden Knights on top with 4:54 to go in the frame. Alec Martinez had a terrific play at the blue line, slap-passing it over to the far circle where Karlsson was ready for the one-timer. Karlsson had an opening about the size of a puck between Grubauer’s skate and the post, and he hit the bullseye to give Vegas a 2-1 lead.

Colorado led in shots 13-10 after the first period.

Coming into this season, T-Mobile Arena had never seen the Golden Knights win a playoff series at home. After tonight, the arena could see two in as many weeks.

The Golden Knights gave their fans a treat with a Game 7 victory over the Wild in the last round and have won three in a row against the Avalanche to make Game 6 at 6 p.m. today a potential clinch game. No one on the home bench wants to go back to Colorado for a potential Game 7, so the Golden Knights are treating tonight like a must-win game, even if they do have some margin of error for the first time.

“It’s a cliche that the fourth one is the hardest to win, but it really is today,” Vegas forward Mattias Janmark said. “They have it all on the line today, but we have to make sure we put it all on the line, too. We’ve got to treat it as a Game 7 for us, too.”

Vegas was in a tough spot the last time it came home for a game at T-Mobile Arena, down 2-0 in the series after two losses in Colorado. The Golden Knights put a beating on the Avalanche in the next two games, improving their all-time make to 13-6 in home playoff games.

But until Game 7 against the Wild, none of those wins clinched a series for the Golden Knights: The only handshake line Vegas fans had ever seen was after the Capitals celebrated their Stanley Cup victory in 2018. Defenseman Brayden McNabb was in the league’s COVID-19 protocol for the winners against the Wild and likes the idea of being on home ice to polish off a series.

“Our rink is insane, our fans are unbelievable,” he said. “I’m excited to get out there tonight because we want to finish it off here. We want to do it for our fans and do it for ourselves.”

The only lineup change for the Golden Knights is the expected return of forward Ryan Reaves, who was scratched for Game 5. Based on who was skating with the extras after an optional skate this morning, it appears Reaves will enter for Patrick Brown on the fourth line, sliding Keegan Kolesar to center.

And why change much? The Golden Knights’ biggest game plan is to simply the stay the course. They appear to have cracked the code to slowing down the Avalanche’s high-flying offense, allowing just five goals in the last three games. The Avalanche will have something to say about it, though, as they adjusted to Vegas’ defensive schemes in Game 5 and led 2-0 going into the third. The Golden Knights struck twice to tie the game before winning in overtime.

If Colorado plays like it did for much of Game 5, it just might get a Game 7 at home Saturday evening. The Avalanche will be desperate and more than capable of winning the next two games, erasing the bad juju of this series. The Golden Knights are more than aware of that and want to make sure the series ends in their building tonight.

“We’re going to have the fans behind us; we’re at home. Where else would you want to be?” Vegas coach Pete DeBoer said. “I don’t think anybody — and if they are, they’re lying — after Game 2 predicted we’d have an opportunity to close this team out in Game 6 at home, other than the guys in our room, the belief there. We’re here, and let’s take advantage of it.”

Golden Knights’ series comeback against Avalanche is one for the ages