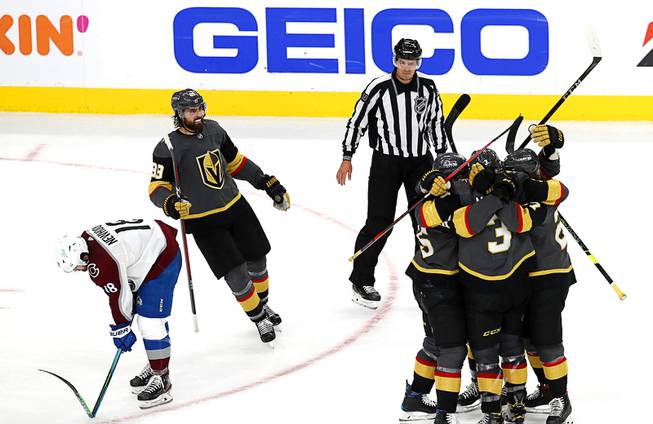 Golden Knights’ series comeback against Avalanche is one for the ages

The Golden Knights skated off the ice at Ball Arena in Denver nine days ago after falling into a 2-0 series hole to the Avalanche mostly expressionless and stayed similarly unrevealing in a terse postgame news conference.

Anyone who didn’t know any better would have assumed Vegas was defeated, technically two losses from elimination but for all intents and purposes done against the team considered the best in the NHL. Anyone who said they were picking the Golden Knights to prevail by winning the next four games straight was “lying,” in coach Pete DeBoer’s words.

But that’s exactly what they did, of course, with the finishing blow coming in a 6-3 Game 6 victory Thursday night at T-Mobile Arena.

“There was a lot more talk about us being swept, embarrassed and if we could even win a game,” he said. “I think we’ve got a group with a lot of pride that just blocked off the noise and went to work and battled and scrapped and scratched and found a way. What a night.”

Colorado had lost more than two games in a row only once all season, and that was a three-game slide near the end of the regular season amid a COVID-19 outbreak on the roster. The Avalanche had won 11 in a row after the aforementioned Game 2 overtime winner, and the vast majority of them weren’t particularly close.

The Avalanche were no “good team.” They were by any measure a great team.

“A team that maybe has the best analytics of the last 10 years, a team that people were pretty much handing the Stanley Cup to in the preseason, all season and certainly once the playoffs started and for sure when they rolled through the first round,” DeBoer said. “If anyone ever questioned our group, I think they answered the bell. What they just accomplished is huge.”

The only string of four consecutive Golden Knights’ wins that could possibly compare to this current one was the delayed sweep of the Winnipeg Jets in the Stanley Cup playoff semifinals in the inaugural season. Sure, that technically held higher stakes with a trip to the Stanley Cup Final on the line, but this year’s clash with Colorado felt every bit as much as the Western Conference Finals as that series did.

The Clarence S. Campbell Bowl, annually awarded to the west’s winner, will technically go to the winner of the Vegas-Montreal series, which begins at 6 p.m. Monday at T-Mobile Arena, but the Golden Knights and the Avalanche were the last real western teams standing. And they would have never met until the Western Conference Finals in a normal year.

It still seems a little criminal that the teams with the two best records in the league had to meet in the second round as a result of the NHL’s pandemic protocols.

But that’s Colorado gripe now. Just don’t lose sight of how close it came to being Vegas’ gripe.

The Golden Knights were on the brink of ruin after losing the first two games into trailing 2-1 late in the third period of Game 3. This was a level of adversity Vegas never faced in the Winnipeg series three years ago when it rebounded after losing Game 1.

This was a level of adversity that would sink most teams or at least cause them to press or come out of their game, but the Golden Knights stayed committed to their belief in themselves and their playing style.

“Even when we were down 2-0 in the series, I didn’t see or hear any panic in our team,” goalie Marc-Andre Fleury said, “and I think it showed.”

One last major difference separating this from the 2018 Western Conference Final triumph — that was a Fleury series. The face of the franchise put the team on his back and delivered them to the Stanley Cup Final.

Beating the Avalanche was no such affair. That doesn’t mean Fleury was bad by any means — heck, he was great but so was the rest of the team.

An offense that was so anemic that it nearly got the Golden Knights eliminated in the opening round ignited for more than three goals per game against the Avalanche led by the second line of Jonathan Marchessault, William Karlsson and Reilly Smith.

A defense that got walloped in a 7-1 Game 1 loss tightened behind exhaustive efforts from Alex Pietrangelo, Shea Theodore and Alec Martinez, all of whom put up more than 100 minutes of ice time in the series.

And it took DeBoer tweaking the Golden Knights’ strategies just enough in each of those areas from game to game to keep the Avalanche from ever getting settled into their groove.

“Game 1 didn’t go as we wanted; Game 2, we thought we played well and it didn’t go the way we wanted,” Pietrangelo said. “Sometimes you have to find the positive things and just take a step back and build off of that. I thought we did a good job making adjustments in each game off of what they were doing, and I think that’s a big part why we had the success we did.”

The Golden Knights’ season has been considered championship-or-bust ever since they left last year’s postseason bubble falling one series short of the Stanley Cup Final. Given the construction of the team, that’s still true.

But no matter what happens, they’ve already secured one of the most memorable moments in franchise history.

Knocking out Colorado is that big of a deal, especially given the way the series started and how Vegas was forced to come back. The Golden Knights went from moderate to massive underdogs and fought their way out.

“That’s reality,” DeBoer said. “I don’t think there’s a person in the hockey world when we were down 2-0 that would have predicted we’d finish this off in six at home.”