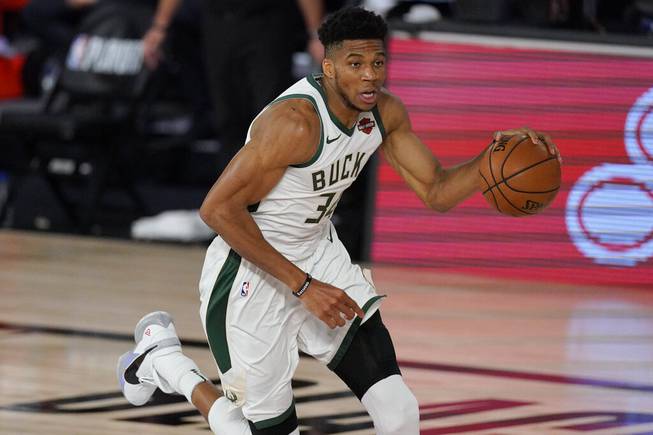 Milwaukee Bucks’ Giannis Antetokounmpo is shown in a game against the Miami Heat Friday, Sept. 4, 2020, in Lake Buena Vista, Fla.

Another weekend, another special collection of sporting events.

Sports bettors are truly getting spoiled this June — largely because of the delays caused out of the coronavirus last year — and should enjoy it while it lasts. There’s an NBA Game 7 and third round of the U.S. Open alone today, and those two only represent the start of the betting board.

I’ll do my best to dive deeper and find value in a number of areas.

Bryson DeChambeau, of the United States, reacts after sinking a putt for par on the 18th hole to win the US Open Golf Championship, Sunday, Sept. 20, 2020, in Mamaroneck, N.Y.

DeChambeau looks healthier, is on stronger form and fits Torrey Pines better than Koepka. This is golf’s best rivalry at the moment, but going into the weekend, the defending U.S. Open should pull ahead of the 2017 and 2018 victor. DeChambeau may not have a great chance of going back-to-back like Koepka because of a mediocre +2 first round, but he played as well as anyone on Friday — crushing the ball off the tee, as is his custom, and darting approach shots. Koepka did the opposite, going low in round 1 before struggling a little more Friday. It’s always a question if his back can hold up for a whole weekend. There are fewer questions surrounding DeChambeau.

Spain’s preparation for this tournament was interrupted with a couple positive coronavirus tests, and it looked a little sluggish and out of sorts in an opening scoreless draw against Sweden. There’s no guarantee Spain’s troubles will continue but this price might be generous even assuming full strength. Poland played pretty well in its opening match but lost 2-1 to Slovakia largely because Gregorz Krychowiak was disqualified after picking up a pair of yellow cards. Because of the loss, Poland won’t be willing to sit back and play for a draw. It needs to win this game, and given the strength of its attack and Spain’s questionable form, an upset is not out of the question.

The Nets are better than the Bucks at full strength. They’re nowhere near full strength in this game. Even if James Harden is healthier than in the last two games, logic would dictate he’s unlikely to be anything better than 70% at the maximum. Kyrie Irving is out. Yes, a superhuman Kevin Durant effort is always a possibility but the Bucks will be scheming against that. Putting up 49 points, 17 rebounds and 10 assists isn’t as easy as Durant made it look in a Game 5 win. The Bucks are currently a 1-point underdog, but I make them a 1-point favorite. It’s not a huge edge, but it’s about as big of one as a bettor can hope to get in a Game 7 after the market has had two weeks to properly price the teams.

Well, this was obviously a lot more attractive at -110 a couple days ago but still playable up to -130. “The Korean Zombie” has put together a better career than Ige so far, but it’s unlikely the 34-year-old is better right now. While the 29-year-old Ige is on the rise, Jung is coming off of perhaps his worst UFC performance — a unanimous-decision loss to Brian Ortega last October. That may have been an anomaly, but more likely it’s a sign of decline and Jung succumbing to the usual aging curve of smaller weight-class fighters. There’s only slight value left, but Ige should win this fight.

Elliott’s Hendrick Motorsports team has been dominating the NASCAR Cup Series, but this weekend brings a marked change. It’s the first Cup race ever at Nashville Superspeedway, which hasn’t even hosted an Xfinity event in 10 years. That makes it hard to predict, especially before practice takes place this weekend. But in that scenario, there could be extra value on backing the best and smartest drivers. Hamlin might be both the best and smartest driver in NASCAR. He’s also dominated the 750 horsepower package this year. Apart from Kyle Larson, who’s currently winning every race, and perhaps teammate Martin Truex Jr., Hamlin shouldn’t be available at a plus-price to anyone.