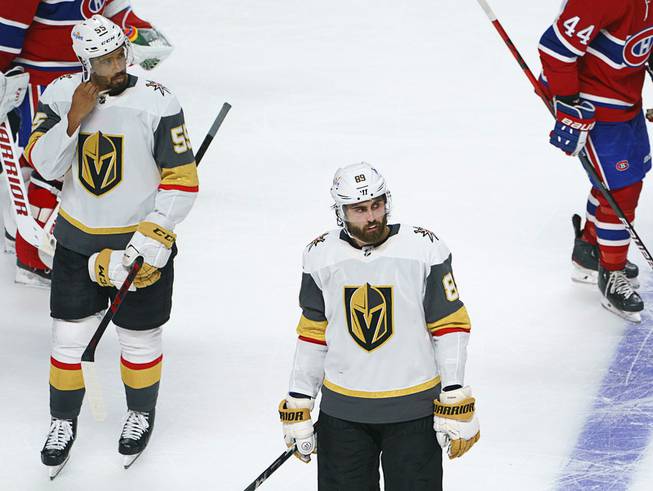 Vegas Golden Knights’ Keegan Kolesar, left, and Alex Tuch skate off the ice after the team’s loss to the Montreal Canadiens in overtime in Game 3 of an NHL hockey semifinal series, Friday, June 18, 2021, in Montreal. (Paul Chiasson/The Canadian Press via AP)

Mark Stone willingly takes the blame when the Golden Knights aren’t playing well. Bearing the brunt of team struggles is part of being a captain, a responsibility has come calling in the semifinals of the Stanley Cup semifinals.

Neither Stone nor the rest of the Golden Knights’ top forwards are producing at their usual levels, which has the Golden Knights in a 2-1 series hole against the Canadiens going into Game 4 at 5 p.m. tonight in Montreal. Stone was critical of their effort after Game 3 and knows the top forwards bouncing back will be a large factor in whether Vegas ties the series or falls behind 3-1 before heading back home.

“Starting from the top, we have to score goals,” Stone said. “Skunked in the first three games, and the main reason that the power play is struggling. There’s a lot of us that have to figure that part out.”

Six of the Golden Knights’ eight goals in the series have come from defensemen and leading-scorer Alex Pietrangelo (three goals) has outscored the whole Vegas forward group (two goals) on his own. While there’s nothing wrong with getting goals from the blue line — it did lead the Golden Knights to a Game 1 victory — it becomes a problem when it’s the only unit contributing.

The two forwards with goals, Mattias Janmark and Nicolas Roy, aren’t the forwards expected to score. The top six forwards — Stone, Max Pacioretty, Chandler Stephenson, William Karlsson, Reilly Smith and Jonathan Marchessault — along with Alex Tuch, have no goals and eight assists. And half of the assists were secondary assists.

The absence of the normal top-line center in Stephenson is certainly having an impact on the unit’s ability to create offense. He was a late scratch for Game 2 and the Golden Knights have scrambled to find a replacement pivot between Stone and Pacioretty. They started by using Roy at the spot in Game 2 before moving on to Keegan Kolesar. Tuch, a winger, got the initial call in Game 3 before they tried out Tomas Nosek.

Nosek is the likely choice for Game 4, but no matter who’s playing, it’s clear how much Vegas misses Stephenson. His speed helped break Vegas out of the zone, as well as drew defensive coverages to open up Stone and Pacioretty for scoring chances.

And while Vegas is missing its top center, Montreal is making it tough on the Golden Knights’ makeshift top line. Phillip Danault is playing like Stone did last series in limiting the scoring chances of the Avalanche’s Nathan MacKinnon and his linemates.

The effectiveness increased in Game 3 with Montreal using the last change at home to draw the desired defensive assignment and neutralize it.

Danault, who finished sixth in the Selke Trophy voting as the league’s top defensive forward, made sure he was a shadow on Stone. Eleven of the nearly 19 minutes Stone played at 5-on-5 were against Danault, and the Golden Knights played to a virtual tie in shots, scoring chances and expected goals.

The Canadiens are happy with that outcome because it didn’t lead to any goals either way. Danault, Brendan Gallagher and Artturi Lehkonen aren’t their top scoring line so if they can just hold Vegas’ two best scorers in Stone and Pacioretty without any goals, it’s a success.

Stone is one of four players on the Golden Knights without a point this series, and Pacioretty has only one assist.

“They’re battling like everybody else,” coach Pete DeBoer said. “You’ve got to stick with it. I liked our game, I liked the looks we’re getting. Yes, we’ve got to stick some more pucks in the net, but it’s not easy and if it was easy everybody would do it.”

It should be easier, however, with the man advantage. The power-play unit — built around the aforementioned top forwards along with defensemen Shea Theodore, Alec Martinez and Pietrangelo — is the easiest area to pinpoint for necessary improvement.

The Golden Knights have drawn twice as many power plays as the Canadiens this series (10-5), but haven’t done anything with the chances. They’ve failed to score, falling to a league-worst 4-for-38 (10.5%) in the playoffs.

“There’s a lot of problems and I don’t think you can pinpoint just one,” Smith said. “There’s a lot things we have to get better at, and it’s costing us the series right now.”

The Golden Knights had one of the best offenses in the league in the regular season. Stone and Pacioretty each put up new career-highs in points per games.

They appeared to rediscover it in beating the Avalanche as Karlsson, Smith and Marchessault were particularly strong with a combined 18 points in six games.

In time, all those players will almost surely find their games and contribute up to their standards. But time isn’t a luxury teams have in the postseason, and facing a series deficit, the clock is ticking right now for Vegas.

The lack of scoring from the forwards has cost the Golden Knights twice in a row and they can’t afford to wait much longer for a breakout.

“We had ample opportunities to score more goals (in Game 3) and I think that’s where our focus is at right now, is to really focus on putting the puck in their net,” Smith said. “I think we did a good job all night breaking out and we have to keep doing that moving forward. But I think our power play is a main focus that we’ve got to work on and it’s got to be a difference-maker in this series.”