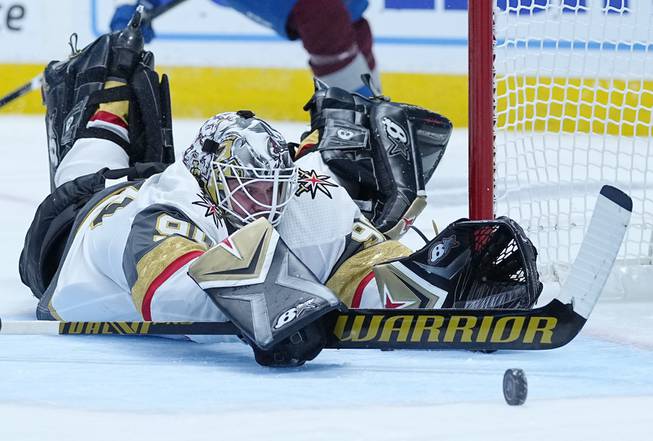 Vegas Golden Knights goaltender Robin Lehner (90) dives to make a save against the Colorado Avalanche in the second period of Game 1 of an NHL hockey Stanley Cup second-round playoff series Sunday, May 30, 2021, in Denver. (AP Photo/Jack Dempsey)

Pete DeBoer emphatically refused to say who will start in net for the Golden Knights against the Canadiens tonight — “Not a chance I’m confirming that,” the Vegas coach said — but based on morning skate it looks like it will be Robin Lehner.

Lehner has started one game this postseason, giving up a career-high seven goals in a Game 1 loss to the Avalanche last round. Marc-Andre Fleury has been terrific this postseason save for one gaffe at the end of Game 3, but it appears Lehner will get the net for Game 4 at 5 p.m. And while teammates also didn’t confirm who would be starting, they expressed confidence in Lehner when asked directly about him.

“Robin’s done everything to keep himself ready,” defenseman Zach Whitecloud said. “He’s a constant pro and first and foremost a great teammate. He keeps himself ready, keeps himself dialed in and he comes to the rink and has fun every day. He’s one of the best guys that I’ve ever been around.”

Lehner was the first goalie off the ice at morning skate in Montreal, a typical indicator of that night’s starter. And while it was a surprise to see him in line to start considering Fleury’s play this postseason, his one outing isn’t indicative of his play.

Remember Lehner started 16 of the Golden Knights’ 20 playoff games last year on the road to the Western Conference Final, turning in a .917 save percentage and four shutouts. He carried that play over to the regular season when, despite a concussion that sidelined him for a month, he had a .913 save percentage and teamed with Fleury to win the Jennings Trophy as the goalies who allowed the fewest goals in the regular season.

He was shelled in Game 1 against Colorado, but players were quick to jump to his defense. The Golden Knights had just finished a seven-game series against the Wild while the Avalanche were rested, and Lehner took the net for the Golden Knights’ eighth game in 15 days, or thrown to the wolves, as Fleury said.

Still, that was Lehner’s only start since May 10, or 41 days ago. DeBoer said it’s not just Lehner, but the “rust vs. rest” debate is something they consider when filling out the lineup card.

“Any players moving in and out of the lineup, it’s always an issue,” DeBoer said. “These guys practice every day. We have a lot of veteran players. Any lineup decisions we make of putting guys in, we throw all those factors into the hat when we’re making those decisions.”

Vegas had an optional morning skate in Montreal, so any other lineup choices are unclear. Top-line center Chandler Stephenson is not expected to play as the Golden Knights continue to find the puzzle piece that works. Tomas Nosek, who returned in Game 3 after missing 13 games, ended the game on the top line and is a possibility to start there tonight.

The Golden Knights have trailed in every series this postseason, including 1-0 to the Wild and 2-0 to the Avalanche. They have never overcome a 3-1 series deficit, and a win would turn the series into a best-of-three contest with two of the games in Las Vegas.