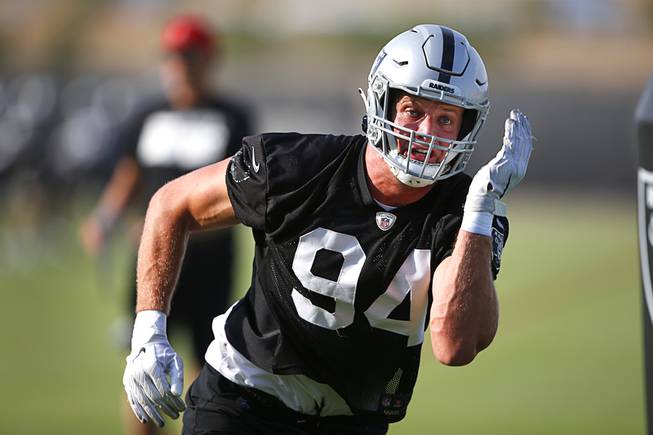 In a moment he wrote he had agonized over for 15 years, Las Vegas Raiders defensive end Carl Nassib came out as gay Monday afternoon.

Nassib became the NFL’s first openly gay active player with an announcement from his home in West Chester, Penn., that he posted to his Instagram account.

“I’m a pretty private person so I hope you guys know I’m really not doing this for attention,” Nassib said in the video. “I just think that representation and visibility are so important. I actually hope that one day videos like this and the whole coming-out process are just not necessary, but until then, I’m going to do my best and do my part to cultivate a culture that’s accepting and compassionate, and I’m going to start by donating $100,000 to the Trevor Project.”

The Trevor Project is a nonprofit organization focused on suicide prevention in the LGBT community. Nassib wrote in an accompanying post that he felt compelled to partner with the organization once he learned its mission and urged others to follow his lead.

He praised both the Raiders and the NFL for their acceptance of his sexuality.

“I feel especially thankful to have had so much support when many who came before — and many even now — do not,” Nassib wrote. “I stand on the shoulders of giants, incredible people who paved the way for me to have this opportunity. I do not know all the history behind our courageous LGBTQ community, but I am eager to learn and help continue fight for equality and acceptance.”

Nassib had been in Las Vegas for the last month for the Raiders’ offseason practices as he goes into a second season with the franchise. He signed a three-year, $25 million deal with Las Vegas in 2020 and is expected to be a part of the team’s edge-rushing rotation next season.

The Penn State graduate, who has also played for the Cleveland Browns and Tampa Bay Buccaneers, wrote that football will remain his focus and asked for privacy heading into his sixth NFL season.

“I only have a small window to achieve greatness in my sport and I owe it to my team, coaches and Raider fans to be completely locked in and at my best for the upcoming season,” he wrote.