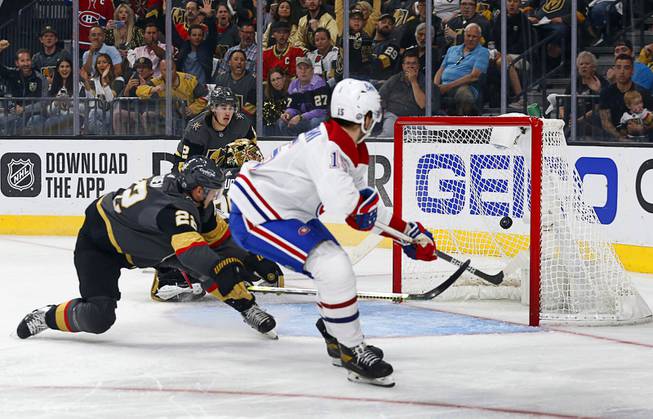 The Golden Knights have conceded the first goal in 11 of their first 17 playoff games, and Montreal made it 12 of 18 on Tuesday. The Canadiens scored the only goal of the opening period in Game 5, and put the Golden Knights in an early 1-0 hole at T-Mobile Arena.

It was a slow-paced first period with not too many chances, but Montreal worked itself an early one and capitalized.

Nick Holden’s aggressive pinch allowed Josh Anderson to sneak behind him and off Anderson went. He charged the net with Zach Whitecloud on his tail, getting off a backhand that Marc-Andre Fleury had to stretch to the far right of the crease to block. The rebound spat to the center of the ice, and Jesperi Kotkaniemi was there to whack it home at 8:45.

The good news is Vegas had went 6-5 when allowing the first goal entering the night. The bad news is Montreal is 9-2 when scoring first.

The Golden Knights had a power play just past the two-minute mark of the period, but did not score. It dropped them to 0-for-12 in the series, and 4-for-40 in the postseason, an even 10% success rate that ranked as the worst among the 16 teams to qualify for the playoffs.

The Golden Knights allowed just six shots on goal, but two of the game on the sequence that led to the goal. Vegas also only had shots itself.

The Golden Knights would rather not trail in Game 5 against the Canadiens tonight, but if they do, at least they know they can come back.

Vegas has trailed in all three series of this postseason and has a winning record (6-5) these playoffs when allowing the first goal. The Golden Knights’ ability to come back has been their calling card this postseason, and they’ve proven that even if they don’t get out to an early lead in Game 5 at 6 p.m. today at T-Mobile Arena, it’s far from over.

“We did a good job of battling back and tying this up, and now we just take care of tonight,” forward Keegan Kolesar said. “This is a big game, and we’ll worry just about this one right now.”

The Golden Knights have allowed the first goal more times they’ve scored it themselves and have trailed at some point in 14 of their 17 games this postseason.

It’s a contrast to the Canadiens, who seldom cough up a lead. They are 9-2 this postseason when they score the first goal, but one of those losses came in Game 4 in Montreal. The Canadiens controlled play through regulation on Sunday, but Vegas found the game-tying goal in the back half of the third period and won in overtime. Just another comeback win for the Golden Knights.

“I don’t think too many guys are focused on the score or what the series is,” defenseman Nick Holden said. “For the most part, I think it’s just consistency in our game that is our biggest focus.”

The Golden Knights could also enter Game 5 fully healthy for the first time this postseason. Forward Chandler Stephenson took part in morning skate after missing the last three games. Vegas has missed at least one of its regulars since the playoffs began, including Max Pacioretty, Tomas Nosek, Brayden McNabb, Mattias Janmark and Ryan Reaves, all of whom have missed multiple games at different points.

Stephenson’s return would help stabilize a top line that has yet to score this postseason but has also prevented the Canadiens’ top line of Phillip Danault, Brendan Gallagher and Artturi Lehkonen from scoring as well. Vegas Coach Pete DeBoer listed Stephenson, who is tied for fifth on the team with six assists this postseason, as a game-time decision.

“It slots us like you want it to be slotted, where we have depth and scoring in all four lines and we can create some mismatches,” DeBoer said. “The games we had a full lineup like that, I feel that we’re a different team. We’ll make that decision at game time. His absence is missed, like Pacioretty’s absence in the first round against Minnesota for six games was missed. We found a way to keep competing here, and we’re in a good spot.”

Marc-Andre Fleury is expected to return to the net for Game 5 following Robin Lehner’s strong outing in Game 4 but not before the goalies had some fun with the assembled media at morning skate. Lehner made sure to tell rookie Logan Thompson, who has never started an NHL game, to go to the locker room first, as the first goalie to leave the ice is typically that night’s starter.

Obviously the Golden Knights wouldn’t turn to Thompson with Fleury and Lehner healthy and available, so the reveal came when Fleury left and Lehner remained to work with that night’s scratches.

The extras were forward Ryan Reaves and Patrick Brown and defensemen Nicolas Hague and Dylan Coghlan. That’s an indicator Reaves and Brown will be scratched and that the Golden Knights feel good about Stephenson’s chances of playing today.

The Golden Knights have only ever played one Game 5 with the series 2-2 and defeated the Colorado Avalanche last round before winning the series in six games. They are 4-5 all-time in Game 5.

Golden Knights stay calm and collected facing elimination, but should they be?