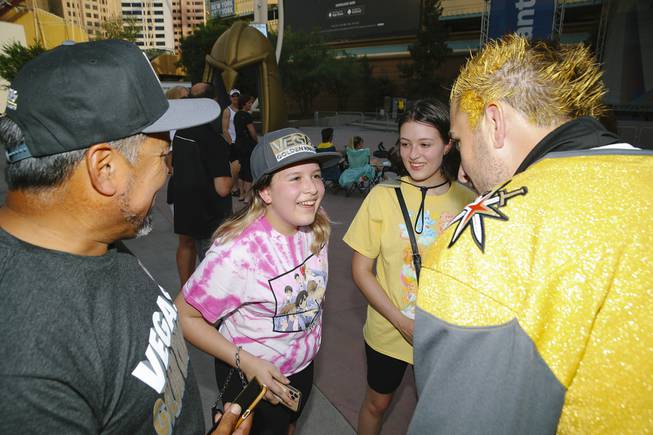 From left, Marco Diaz, Luciana Sepulveda, 12, and Maria Sepulveda, 17, react as Drew Danzeisen, founder of the 21 Is Golden Initiative, gives them tickets to a Golden Knights game at T-Mobile Arena Wednesday, June 16, 2021.

Drew Danzeisen roamed Toshiba Plaza outside of T-Mobile Arena in an authentic Golden Knights jersey despite 115 degrees temperatures for more than an hour before game time Wednesday.

The 27-year-old watched as the area filled in ahead of Game 2 of the Golden Knights’ playoff series against the Montreal Canadiens, particularly surveying the crowd settling in front of the big screen. Right before puck drop, he planned to surprise a child and his or her family who came to watch the action outside and send them into the arena for free.

“It’s the best part of this,” Danzeisen said. “I feel like Santa Claus in the summer.”

That’s an accurate description of how Danzeisen has spent the last month as Vegas has advanced through the Stanley Cup Playoffs, albeit with temporarily dyed gold, spiky hair instead of flowing white locks and an app with tickets in place of a sleigh with presents. A diehard Golden Knights fan who’s frequently inside the building, he decided to forego the experience for this year’s playoffs and instead sponsor children to attend their first game.

The “21 Is Golden” campaign started as a way to promote his new business, Collr, which helps brands and athletes digitize into the online NFT (non-fungible token) collection space. In partnership with the Boys & Girls Club of Southern Nevada, Danzeisen plotted to send 21 kids and a guest into their first game throughout the playoffs by selling NFTs.

When sales started slow, Danzeisen self-funded the initiative and watched the project take off more than even he initially anticipated. Everyone from Clark County Commissioner Justin Jones to the Klean Kicks shoe store contributed and Danzeisen surpassed his goal of awarding 21 children tickets in Game 1 of the series against Montreal.

The count currently stands at 26 children sent in heading into tonight’s Game 5 against the Canadiens where Danzeisen will further pad the number.

“The goal now is just to send as many kids as we can into these games,” Danzeisen said. “2021 is our golden year to win it, and I just think it’s amazing to send kids in to witness history.”

For Game 2, Threads of eNVy, a Nevada-themed apparel line, partnered with Danzeisen for a ticket giveaway that included clothing from the company. The winner was 10-year-old Evyn Linan, who jumped up and down and slid on a knight helmet while Danzeisen transferred tickets to his mother.

“My favorite player is Fleury because he’s very good at goalie and I really like when they score because it makes me very happy,” Linan said.

Danzeisen gifted his final set of tickets Wednesday to a pair of sisters, Maria Sepulveda, 17, and Luciana Sepulveda, 12, Golden Knights’ fans from Mexico City, and adult family members who were planning to watch from Toshiba Plaza. Like most of the families whom Danzeisen approaches last minute outside the arena, they were in disbelief at their good fortune as they escaped the heat and went through the front doors of T-Mobile Arena.

“I’ve been around and worked in sports my whole life,” Danzeisen said. “I’ve been fortunate enough to go to some of the biggest events in sports and I know there are some kids out there who haven’t had the opportunity. So especially here in Vegas where the Knights are the biggest team and this is their biggest year, I just thought it was a perfect time for the campaign.”

Once a standout baseball player at Cimarron-Memorial High, Danzeisen went on to play in junior college at San Diego City College and Grossmont College. He later transferred to San Diego State University, majoring in international business with an eye on working in sports.

He always dreamed of attending the Olympics and made it a reality in 2016 when he traveled to Rio de Janeiro and found work around the event. The 2016 Olympic Opening Ceremony still stands as his favorite sporting event he ever attended and inspired much of his career path since, including 21 Is Golden.

“The NFTs hit me because I’ve been a collector my whole life,” Danzeisen said. “The tickets are what inspired me because I’ve collected every single one of all the events I’ve been to — Olympics, NBA Finals, NBA All-Star. Collecting those tickets goes back to the story of that experience and being there. It’s a token, a reminder of being in that venue, that arena, so that’s how Collr started out.”

To ensure the children he’s getting in had something to remember it by, Danzeisen purchased each of the first 21 kids authentic, gold jerseys to wear into the game. Fifteen of them were linked to him through the Boys & Girls Club, with some coming from the same facility where Danzeisen spent time in his youth.

All the kids are special to Danzeisen, but he might be proudest of connecting with 16-year-old Brienna Love through the Nevada Donor Network. After receiving a heart transplant in 2016, Love has been a public face for the organization and appeared in an ad with Golden Knights forward Alex Tuch.

Her parents also work in concessions at T-Mobile Arena, but Love had never attended a game before Danzeisen coordinated to get her into Game 1 against the Canadiens. Getting to hear stories like Love’s and witnessing the joy on children’s faces has made the significant financial and time commitments Danzeisen has devoted toward 21 Is Golden worth it.

“Some of them have come out of the arena crying,” Danzeisen said. “They have used the towels they gave them inside to wipe tears away for how much they enjoyed the moment and that’s just been so cool. I’ve watched every single game except one outside, so I can meet them before and after. They’re timid at first but usually come out all excited and yelling, ‘Go Knights Go!’”