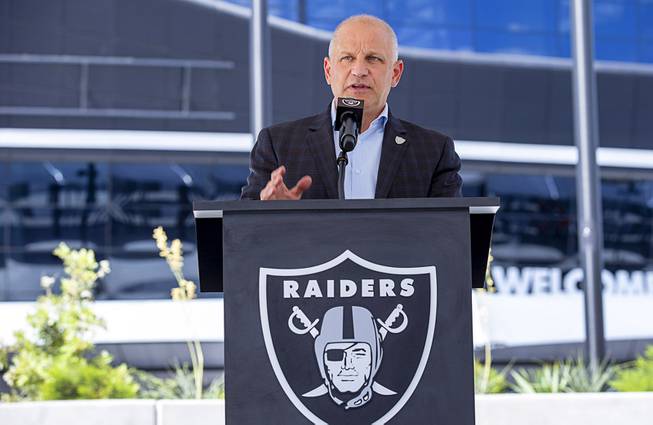 After 30 years with the Raiders, team president Marc Badain resigns

One of the Raiders’ most instrumental forces in getting Allegiant Stadium built stepped down Monday afternoon.

Team president Marc Badain has resigned from his position, the organization announced. Badain had spent 30 years with the franchise, climbing the ranks from an intern to the top post on the business side of the team. He headed efforts for the team’s relocation after it couldn’t come to a deal for a new stadium in Oakland, Calif.

“His efforts in helping to build the most magnificent stadium in the sports and entertainment capital of the world will never be forgotten,” Raiders owner Mark Davis said in a statement.

Badain became a public face for the team in Las Vegas when they began exploring moving to the valley five years ago. He worked with local legislators and businessmen to secure the team’s relocation and Allegiant’s $2 billion construction.

Dan Ventrelle will step into the vacated president role on an interim basis. Another longtime Raider, Ventrelle has worked for the franchise for 17 years most recently as executive vice president and general counsel.

Ventrelle worked hand-in-hand with Badain on the stadium, according to Davis.

“His experience on both the football and business side of the organization make him the best choice to lead the Raiders’ organization at this time,” Davis said.

The Raiders officially begin their second season in Las Vegas on Tuesday, July 27, when players report to the team’s Henderson headquarters for training camp.

What we know about 2021-22 UNLV basketball schedule