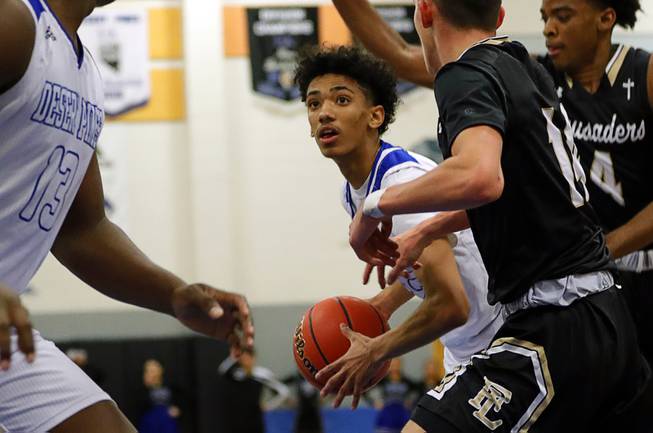 This past weekend was a big one for a pair of UNLV recruiting targets, as local prospects Milos Uzan and Joshua Jefferson helped lead their team to a prestigious summer tournament victory.

Uzan and Jefferson, both Class of 2022, teamed up to drive their Dream Vision 17U squad to a win at the Adidas 3SSB event in Council Bluffs, Iowa. UNLV assistant coach Tim Buckley was on hand for the entire weekend, including the championship game on Sunday which saw Dream Vision topple Midwest Basketball Club.

Uzan, a 4-star prospect, is rated the No. 78 player in the country. He has averaged 9.1 points, 5.7 assists and 4.7 rebounds so far this summer on the Adidas circuit.

Uzan played his first two years at Desert Pines under his father, head coach Mike Uzan, but transferred to Prolific Prep last season. UNLV began recruiting him early in his high-school career and new coach Kevin Kruger has continued to make him a top priority since taking over the program. In addition to UNLV, Uzan has offers from UCLA, San Diego State, Arizona State and Creighton.

Jefferson, a 6-foot-7 forward, is another of UNLV’s most coveted recruits. He has averaged 9.2 points and 5.0 rebounds on the Adidas circuit while shooting 44.1% from the field. The 3-star prospect is heading into his senior season at Liberty and has received offers from UNLV, Utah State, Texas A&M and Pepperdine.

After 30 years with the Raiders, team president Marc Badain resigns