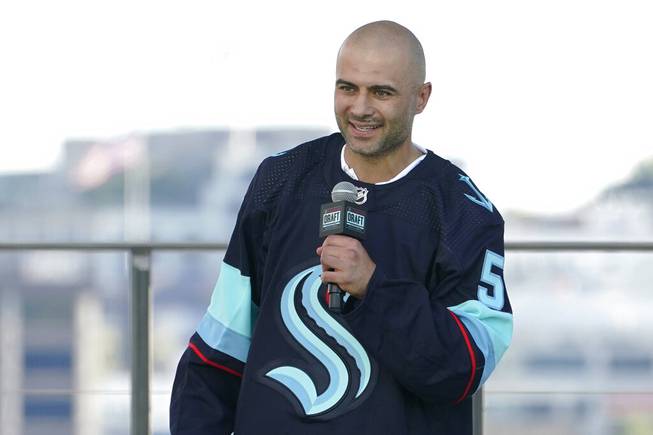 How Kraken expansion draft stacks up against Golden Knights’ template

Mark Giordano, a defender from the Calgary Flames, speaks Wednesday, July 21, 2021, after being introduced as a new Seattle Kraken player during the Kraken’s NHL hockey expansion draft event in Seattle.

The NHL’s newest team won’t have to wait long to meet its second-newest team.

During the Seattle Kraken’s expansion draft Wednesday night, the ESPN broadcast announced Seattle’s first ever game will be in Las Vegas against the Golden Knights on Oct. 12.

The Golden Knights set an impossible standard to follow for an expansion team, reaching the Stanley Cup Final in their inaugural season four years ago. The Kraken may not match that right away, but they did draft a team that looks like an instant contender.

The expansion draft is the first chance for Seattle to establish itself, as it was for Vegas in 2017. The teams didn’t take the exact same routes to creating their teams, but there are still a couple similarities between the Kraken and the first-year Golden Knights.

We take a look at a few similarities and differences between the teams’ expansion drafts.

Unlike the Golden Knights, Seattle didn’t go with the brand-name goalie

The Golden Knights leapt at the chance to grab Marc-Andre Fleury from the Penguins (and even got a second-round pick out of Pittsburgh for doing so), giving them not only an immediate face of the franchise, but a future Hall of Famer at the sport’s most important position.

The Kraken opted against doing the same. Montreal’s Carey Price was there for the taking, left exposed so the Canadiens could protect backup Jake Allen, but Seattle passed, and took young defenseman Cale Fleury instead.

The situations were quite different. Fleury had just two years left on his deal for a manageable $5.75 million cap hit, while Price is under contract for five more seasons at a mammoth $10.5 million hit. Taking Price would have been a slam-dunk business decision but a risky hockey decision that the Kraken avoided.

Seattle did pick Chris Driedger from Florida and signed him to a three-year deal. He’s a solid, if less flashy option: The 27-year-old has only 38 games of NHL experience, but has a career .929 save percentage and 2.09 goals-against average. The Kraken also grabbed Vitek Vanacek from Washington and Joey Daccord from Ottawa, presumably as backups.

In 2017, the Golden Knights selected 13 defensemen in the expansion draft and acquired two more in a trade. A few of them didn’t last long — Alexei Emelin, David Schlemko, Marc Methot and Trevor van Riemsdyk were all traded within a few weeks — but Vegas saw the value in acquiring both a high quantity and quality of defensemen.

The Kraken took only 10 defensemen, but the strength of their team may fall on the blue line. Vince Dunn from the Blues, Jamie Oleksiak from the Stars, Adam Larsson from the Oilers and Mark Giordano from the Flames form a defensive corps better than several teams in the league.

Kraken have plenty of cap space

One of the most dangerous aspects of the early Golden Knights was that even after they reached the Stanley Cup Final in 2018, they had room under the salary cap to supplement the team for years. They used that to trade for and extend Max Pacioretty, Mark Stone and Robin Lehner over the next few years, as well as sign Paul Stastny and Alex Pietrangelo to free-agent contracts.

The team the Kraken drafted, which will surely change before the season opener in October, has a cap hit of $52.5 million, according to CapFriendly, which is not even $4 million over the cap floor with almost $29 million of space. They could dabble in some free agents next week, or could pocket that for use at the trade deadline or next offseason. They have enough financial flexibility to do just about whatever they want.

But they did still get some established players

Even outside of Fleury, the Golden Knights grabbed some players casual hockey fans knew. James Neal was coming off a 23-goal season and David Perron had 46 points the year before coming to Vegas. Jonathan Marchessault wasn’t as well-known, but he still scored 30 goals for Florida in 2016-17.

But the Kraken didn’t come away with a bunch of unknowns. Calgary captain Mark Giordano might be the most popular and could be the first to wear the “C” in Seattle if he isn’t flipped. Jordan Eberle is an under-the-radar scorer from the Islanders, having posted a 20-goal pace over a full season every year of his 11-year career, and a 50-point pace in all but two.

No wheeling and dealing from the Kraken

If Seattle general manager Ron Francis made any side deals with other teams, they weren’t announced Wednesday night.

A major part of the Golden Knights’ draft involved trades. Vegas made 10 of them, picking up two additional first-round picks and a second-rounder in exchange for not taking players other teams wanted to keep. Vegas also acquired roster stalwarts Reilly Smith, Shea Theodore, Alex Tuch and others in side deals.

There’s still time for Seattle trades, whether they are deals already made but unreported or ones still to be made at the draft. But Vegas made trades a key component of roster-building while the Kraken did not.