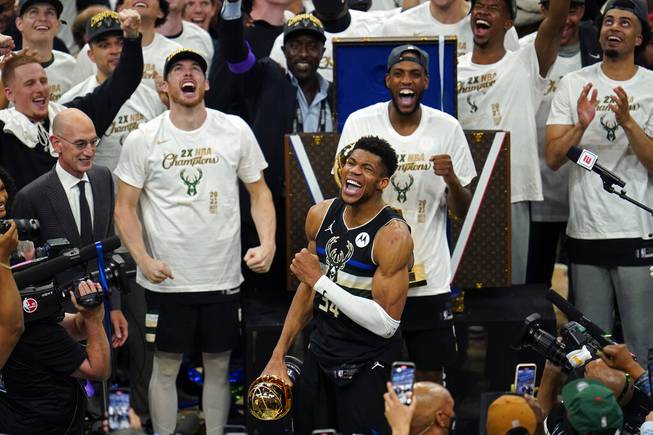 Not everything about getting back to normal is dandy.

For what feels like the first time in a year, betting boards are starting to look a little bare. With the conclusion of the NBA and NHL seasons, gamblers are hard-pressed to find much to fire on until football season commences.

Another weekend wagers go-to betting option, NASCAR, is also on break for the next couple of weeks. At least the column went out of a busy period on a high with the Milwaukee Bucks’ NBA championship.

The Bucks were my first basketball future placed all year, at +745, and a big Game 5 from Jrue Holiday helped push total profits for the NBA season in the column to just short of $2,000 assuming a $100 wager on each bet. An additional 3-1 record away from basketball last week raised the bottom line to more than $4,000 on the year.

So maybe the break isn’t all that bad after multiple successful seasons. Bettors needs time to get ready for football anyway, something I’m continuing to do and therefore placing two more futures this week.

Find them below along with the rest of this week’s column. Records are attached individually by sport, with the cumulative at the bottom of the page. The monetary figure is calculated by the assumption of a bettor placing a $100 wager on each pick. Any picks outside of the column will be linked and included in the record total. Odds are the best currently available in Las Vegas at publication time.

Too many people have been too quick to write off the Braves in the aftermath of the Ronald Acuna Jr. injury. It’s a massive loss, to be sure, but Atlanta still has enough to be competitive — especially in a division as mediocre as the National League East. The Braves’ run differential dwarfs the Phillies’ despite their identical records going into Friday night’s game. And in Saturday’s third game of their series, the Braves have a pitching edge. Atlanta starter Drew Smyly has turned the corner and played well in the last month while Philadelphia’s Vince Velasquez is still stuck in a rut. This line is about 10 cents off and should climb in the Braves’ direction.

Tonight’s ESPN-televised card is a lowkey banger, full of competitive fights that promise fireworks. This women’s flyweight bout might be the one exception, and that’s why it creates betting value. Eubanks should be a mismatch for Reed. She’s bigger, stronger and more battle-tested. The only question is whether it’s more likely that Eubanks submits Reed or gets a TKO via ground-and-pound. Luckily, this wager covers both — and with a generous payout to boot.

For record-keeping purposes, let’s make it easy and split this right down the middle with $50 on each of these golfers to win next weekend at Kasumigaeski Country Club in Tokyo. Not that there would be anything wrong with betting more on each, as they both represent tremendous value. Schauffele doesn’t have the recent big wins like some of his main competitors in the Olympics (namely Jon Rahm and Collin Morikawa) but he’s every bit as talented. Using strokes gained data, I’d rate him as the second-best golfer in the world right now — just behind Rahm and just ahead of Morikawa. Double-digit outright odds on Schauffele in a short field is too high anywhere in the world. Location is what gives Matsuyama a big boost as playing in his native Japan represents a real home-field advantage. Yes, he hasn’t been active after testing positive for coronavirus at Rocket Mortgage Classic and then withdrawing from the Open Championship. But not participating in the final major of the year reportedly had little to do with his health, and more to do with logistical concerns. He spent the time instead getting ready for the Olympics, and there’s no reason to think he didn’t capitalize on it. Matsuyama is already an underrated player who can compete with anyone before factoring in the advantages that will benefit him next week.

A necessary reality-check for everyone dusting off their annual Longhorns’ jokes for another preseason: Texas was really good last year. Not good enough to save Tom Herman’s job, of course, but good enough that they were 11 combined points (in three losses) away from a perfect season. There’s reason to believe the Longhorns will be even better in Steve Sarkisian’s first year at the controls. The talent at the skill positions ranks up there with the best in the nation behind players like do-everything running back Bijan Robinson, big-play receiver Joshua Moore and Ohio State transfer Xavier Worthy. Quarterback Casey Thompson tore up Colorado for six touchdown passes in a blowout Alamo Bowl win, and he may not even start with freshman blue-chipper Hudson Card drawing rave reviews. Sarkisian also made an inspired choice at defensive coordinator in Washington’s Pete Kwiatkoski. The Longhorns have perennially underachieved in the last decade, but it’s no secret that the program is one of college football’s biggest sleeping giants. It may just fully wake up this year.

The hype on the Chargers is out of control, and it’s starting to wade into the betting market. From a top-to-bottom roster perspective, Los Angeles might be the least talented team in the AFC West. They were also mediocre by any advanced metric a year ago despite the common consensus now being that they were a new coach away from Super Bowl contention. I get the excitement around quarterback Justin Herbert and new coach Brandon Staley, but both may need time to develop. Herbert was outstanding in his rookie season, but development doesn’t always follow a straight line. Expecting him to become an MVP candidate in year two is a leap. Staley, meanwhile, inherits a defense that’s injury-prone, annually underwhelming and not a perfect scheme fit to what he’d like to implement. Staley may turn into a great coach, but five years ago he was Division III defensive coordinator. He’s earned every promotion he’s gotten since then, but it’s still been a fast-track to NFL head coach and reasonable to think it might take a season to settle in.

Podcast: Could UNLV football have a ‘magical’ season?