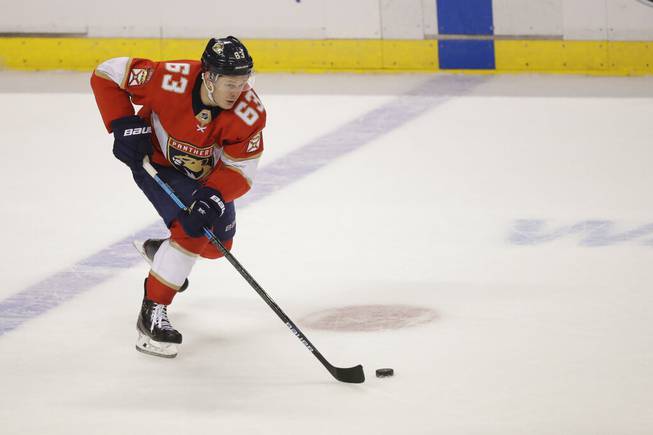 The Golden Knights were active on the first day of NHL free agency this morning, shoring up just about all of their obvious needs.

Vegas traded for scoring winger Evgenii Dadonov from Ottawa, inked defenseman Alec Martinez and forward Mattias Janmark to extensions and signed Laurent Brossoit to be their backup goalie. General manager Kelly McCrimmon said the team wanted to manage the salary cap, resign Martinez and add a forward, and though Vegas ended the day slightly above the cap, accomplished its biggest goals.

“As an overview, really pleased with how this period of time has gone for our team,” general manager Kelly McCrimmon said. “We’re in a good spot, we’re not likely to be involved in any other discussions. We’ve used the money that we had available to us, we’ve addressed the needs that we identified going into this time frame, and we’re anxious to get ready for training camp as we move into the next season.”

Dadonov comes to the Golden Knights in exchange for defenseman Nick Holden and a 2022 third-round pick. He has two years left on his contract with a $5 million cap hit.

Dadonov fills the biggest hole Vegas had, which was putting the puck in the net. In his final three years with the Panthers, he scored 28, 28 and 25 goals, though his total dipped to 13 in 55 games last year in his only season with Ottawa.

The Golden Knights also made the extension of Alec Martinez, which was reported Monday, official. His new contract is for three years with a cap hit of $5.25 million.

Martinez had a career year with the Golden Knights with nine goals, 23 assists and 32 points, the best of his career on a per-game basis in the pandemic-shortened season.

Janmark returns to Vegas on a one-year deal worth $2 million. He came to the Golden Knights at the trade deadline and filled a nice role on the third line. He cemented himself in team history by scoring a hat trick in Game 7 of the first round against the Wild.

Vegas then signed Brossoit to a two-year deal to back up starting goalie Robin Lehner. Brossoit has been a solid backup the last three years with Winnipeg, including a .918 save percentage in 14 games last year. He will have a $2.325 million cap hit.

The Golden Knights were flush with cap space after Tuesday’s trade of Marc-Andre Fleury but are out of it now, and currently sit about $1.8 million over the cap, according to CapFriendly. While teams are allowed to exceed the cap in the offseason, another move will come before opening night to make the team compliant.

Vegas still needs to work out a deal with restricted free agent Nolan Patrick, who was acquired in a trade for Cody Glass earlier this month, as well as defenseman Dylan Coghlan. Neither is expected to command a large cap hit.

The Golden Knights lost forward Tomas Nosek to free agency when he signed a two-year deal with the Bruins worth a reported $1.75 million per year.