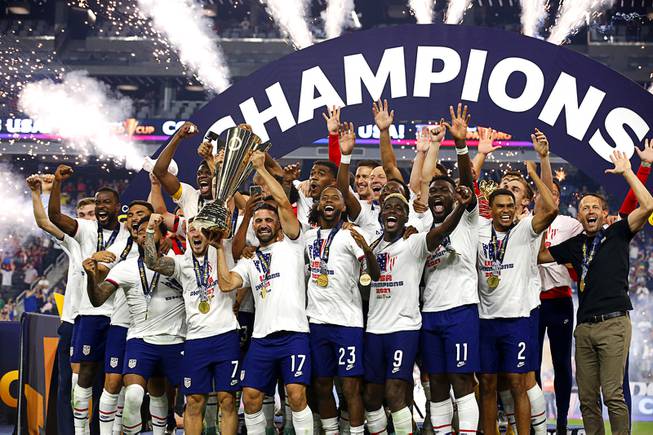 In the CONCACAF Gold Cup soccer final between U.S. and Mexico more than 20 years ago at the Los Angeles Memorial Coliseum, Marcus Cranston was too nervous to wear his red, white and blue apparel because the crowd was made of mostly Mexican supporters.

That was also the case on Sunday at Allegiant Stadium, where the final of the storied rivalry repeated itself in front of 61,514 fans — an overwhelming number in black and green Mexico jerseys.

But this time Cranston and his wife were hard to miss: He in his American eagle costume; her dressed as Wonder Woman. They also had a replica Gold Cup trophy, and were so popular supporters of both teams stopped to take photos. He said there was no animosity with the opposing fan base.

“We can’t wait to get in,” he said outside Allegiant before the doors opened. “It’s going to be amazing.”

It was the first large-scale sporting event at the $1.9 billion facility built for the Raiders and UNLV football, and ended in dramatic fashion when Miles Robinson’s header in overtime off a set piece trickled into the back of the net for a 1-0 United States win

The stadium opened last year, but couldn’t host capacity-sized events because of the pandemic. After two music shows last month, this was the maiden athletic event with no crowd restrictions, and it delivered on the big-game atmosphere the stadium is projected to bring the valley multiple times each year.

Metro Police showed up in full force, patrolling the neighborhood and guiding traffic. Outside, banter between opposing fans seemed friendly and tempers did not appear to flare.

Draped with Mexican and American flags stitched together, Jose Zavala said he was torn as to who to cheer for Sunday: “I follow the rivalry, but my heart is divided today.”

His family is a mishmash of Mexican-Americans. Zavala, who is employed by Metro Police, was born in Mexico, but raised here. His American-born siblings also were divided with their fandom.

To him, the prominent event meant so much more than soccer. His father and his cousins, who work construction, helped build the facility, and on Sunday, he was “proud to see the finished product.”

Zavala was hoping for an entertaining match with many goals

“Hopefully it’ll be fun for the entire fan(base), and everyone enjoys the same,” he said.

Josh Villalpando is American born, but wore a Mexico jersey. His girlfriend, Brenda Guerrero, was born in Mexico, but wore a “U.S.A.” T-shirt.

The Salt Lake City couple always cheer for both squads, they said. When both teams face each other, “we come together, we watch the games, we throw parties” at home, Villalpando said.

On Sunday, the Raiders season ticket holder, who got a tour of the stadium a couple weeks ago, said he was eager to go into the packed stadium, which he described as “top of the line.”

Esteban and Soledad Oregon immigrated to the U.S. from Guerrero, Mexico, about 30 years ago. Their children were born here.

“We’ve been following the Gold Cup since it started,” Esteban said.

The married couple said they were excited about the Las Vegas final. They wore Mexico jerseys, and had neck-tied American flag ribbons.

“We’re cheering for the U.S., and for Mexico,” Esteban said. “Our kids are from here, we live here, so, for us, we like both of them.”

The game sold out in 90 minutes before the finalists were determined, which was fastest sell-out in the tournament’s history, stadium officials said.

The U.S. fans certainly enjoyed how the game ended, as Robinson scored the game’s lone goal in the 117th minute — just three minutes before penalty kicks would have been utilized to determine the winner.

U.S. players rejoiced in front of the American Outlaws, their traveling support group as organizers promptly set the stage for the medal ceremony and trophy presentation accompanied by pyrotechnics and gold confetti.

Robinson, in post-match interview on Fox Sports, described it as “awesome, crazy emotions.”

Not bad for the first capacity-crowd sporting event at the new Las Vegas stadium.

Marc-Andre Fleury won’t retire, will play for Blackhawks next season