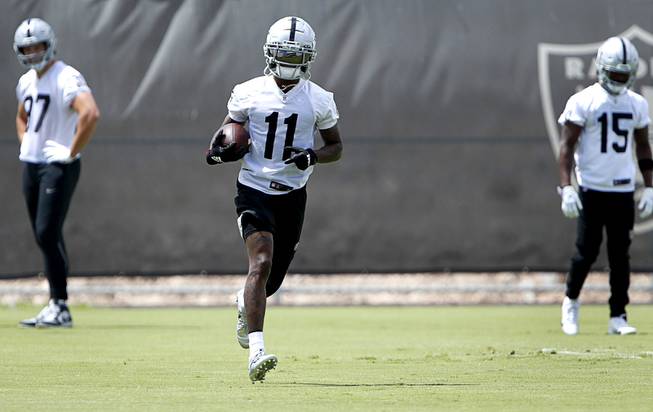 After a week of practices that took place in shorts and (sometimes) padded helmet shells, the Raiders put on real pads for the first time on Tuesday, marking an unofficial milestone of training camp.

“That’s standard for the first day with pads,” Kwiatkoski said. “Guys are excited, guys are ready to hit … It feels faster. It’s one of those things you circle, the first day of camp you see when you put pads on.”

Pads or no pads, there’s no slowing down Henry Ruggs. The second-year wide receiver is coming off a modestly productive rookie season, but if Tuesday was any indication, he could be in store for a breakout year.

In competitive drills, Ruggs separated down the field on two separate occasions, hauling in a pair of long touchdown passes from quarterback Derek Carr.

Carr was so excited after Ruggs hauled in the first bomb (over cornerback Nate Hobbs and safety Dallin Leavitt) that he ran 50 yards to meet the young wideout in the end zone, shouting, “Way to go, Ruggsy!”

Head coach Jon Gruden has been happy with the progress shown by Ruggs and fellow second-year receiver Bryan Edwards.

“I think the big thing with Henry is, he’s out here,” Gruden said. “He’s practicing and he knows the offense. He anticipates what’s going to be called now instead of reacting to what’s called as he’s lining up. We’re seeing really good things from Ruggs and [Bryan] Edwards. Really proud of them so far.”

Backup quarterback Marcus Mariota has been locked in throughout the offseason, and Tuesday was another example of the seventh-year veteran coming to play — except for one throw.

Mariota dropped back and tried to connect on a crossing pattern over the middle, but linebacker Kwiatkoski jumped the route and intercepted the pass.

It was the second straight day Kwiatkoski intercepted Mariota, the only two flaws in his training camp performance so far.

Gruden was so perplexed by Mariota’s hiccups that he could only explain it by concocting a conspiracy theory in which the QB and the linebacker hashed out a plan (over beers) to throw scripted interceptions.

“Mariota was off to a great start yesterday and he looks like the Galloping Ghost out there, and then today he throws four incredible passes, and I think he and Nick are probably having a beer down at the Caesars Palace right now,” Gruden said. “I don’t know what the hell that’s all about. Nick is an instinctive player. When you’re in zone coverage you are reading the quarterback, and [Mariota] telegraphed both of those throws, and it’s really kept him away from having one hell of a camp. And he is having a good camp, but he could be having an outstanding camp had it not been for a couple of interceptions.”

The Raiders want to apply pressure with their front four (who doesn’t?), and that effort has to start with defensive ends Maxx Crosby and Yannick Ngakoue. On Tuesday, both players looked fast and elusive in pass-rushing drills, even toward the end of the session.

Ngakoue, a marquee free-agent signing with 45.5 career sacks to his name, is known for his high-energy style, something that is already appreciated by his defensive teammates.

“He’s a guy that sticks out on the D-line,” Kwiatkoski said of Ngakoue. “He brings energy. You can feel his presence out there when he’s lined up at end.”

Crosby, who has recorded 17.0 sacks in his two NFL seasons, appears to be in tremendous physical condition, which is good news for a defense that could really use consistent pressure off the edges.

“He’s in incredible shape,” Gruden said of Crosby. “He can go all day, and I tried to wear him out today with a fourth quarter pass rush in the last drill and he’s ready for the 15th round. He wants to keep fighting. I love him. I love the way he’s working, and guys look up to him. And [Yannick] Ngakoue, that’s his whole deal. He’s a highly-conditioned freak; and I think Maxx and Yannick want to be there for four quarters.”

Last week, offensive coordinator Greg Olson tried to temper expectations surrounding rookie right tackle Alex Leatherwood by praising him with the caveat that the team hadn’t practiced in pads yet.

Now, with one padded practice in the books, it’s fair to raise to expectations again.

Leatherwood, the team’s No. 17 overall draft pick, looked quick, decisive and powerful on Tuesday, twice completely caving in the interior of the defensive line on running plays, clearing out sizable lanes for the ball carrier.

There was loud criticism of the Raiders front office when Gruden and general manager Mike Mayock “reached” to select Leatherwood in the middle of the first round, but right now the Alabama product is making them look wise indeed.