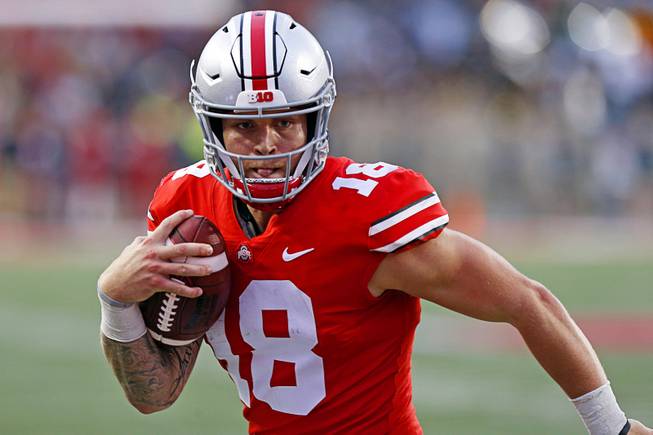 Tate Martell is nonparticipant on first day of UNLV camp

In this Sept. 22, 2018, file photo, Ohio State quarterback Tate Martell runs against Tulane during an NCAA college football game in Columbus, Ohio. Martell says he is transferring from Ohio State to Miami.

Tate Martell did not suit up on the first day of UNLV training camp, but it’s only a matter of time before the high-profile transfer jumps into the team’s quarterback battle.

UNLV opened camp on Wednesday with a two-hour practice session, and the addition of Martell has instilled some hope around the program, even coming off an 0-6 campaign in 2020. The team kept him out of sight during the portion of Wednesday’s practice that was open to the media, but he later joined the team on the field as a nonparticipant.

Head coach Marcus Arroyo said Martell, who has enrolled as a walk-on, has not yet been cleared to practice.

“We had a conversation over summer a few times, and over the time we got a chance to know each other,” Arroyo said. “About our backgrounds and what we were both looking for, what our culture stands for, trying to get a feel for where he’s at, what he’s looking for, if there was a fit.”

Arroyo said there is no timeline for when Martell will be cleared to play, but when it happens the fifth-year transfer should immediately enter the team’s quarterback battle as a heavy favorite to win the job. Junior Justin Rogers and sophomore Doug Brumfield are currently listed as co-No. 1 QBs, with freshman Cameron Friel also competing for snaps.

Martell, a former state champion and Gatorade National Player of the Year at Bishop Gorman, committed to UNLV two weeks ago after spending his first three years at Ohio State and Miami. As a senior at Gorman he passed for 2,362 yards and 41 touchdowns while running for 1,257 yards and 21 TDs. He committed to Ohio State as a 5-star recruit, but transferred to Miami two years later after failing to earn playing time at OSU.

Martell spent one year at Miami and again struggled to get on the field, even moving to receiver in an effort to get some snaps.

It’s been so long since Martell has seen extended live action that Arroyo said he had no scouting report on him before recruiting him to UNLV.

“I know nothing,” Arroyo said. “The film I’ve watched, I wasn’t his coach, I wasn’t at those other places. I know he likes football. I know he cares about competing and he’s got some traits about him that, having talked to him and getting a chance to meet him, that I like. Outside of that, we get a chance to coach him and I’m excited about that.”

UNLV still has 29 days to get Martell on the field and up to speed in Arroyo’s offense, and Arroyo indicated that there is no rush to name a starter for Week 1 against Eastern Washington (Sept. 2).

When sophomore receiver Kyle Williams was asked if he’d prefer to know who his starting quarterback will be, he said he can work with the current situation.

“Honestly yes, all receivers will say that,” Williams said, “but I work with all the quarterbacks just as much, so I feel like the connection is there. We’ve got that Davante Adams-Aaron Rogers connection.”

Get to know the Vegas Golden Knights’ latest additions