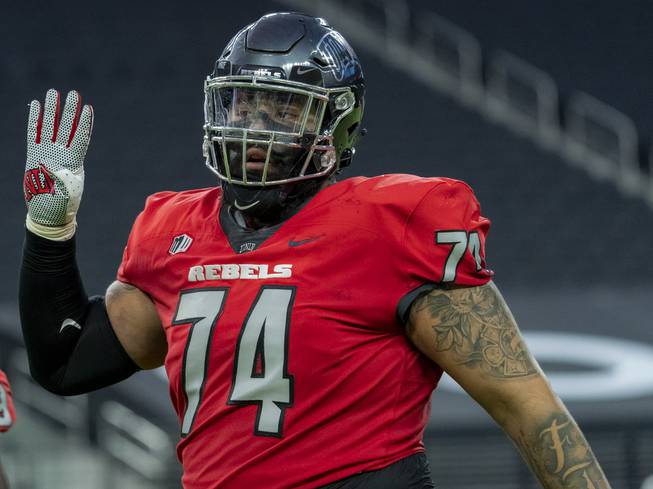 Julio Garcia II, a Las Vegas native, is a sixth-year senior and team leader for the UNLV football team.

Julio Garcia II remembers some of his first practices with the UNLV football team and watching the program’s upperclassmen cherishing their final season of collegiate ball.

Observing the way players such as fellow lineman Will Kreitler went about their preparation with a certain appreciation for the process certainly made an impact. He learned what many before him realized: The window to live out your football dreams quickly closes.

UNLV opens the season at 7 p.m. today against Eastern Washington at Allegiant Stadium, giving the local product Garcia one last go-around with his beloved Rebels. Like the players before him, Garcia’s primary focus is helping UNLV win six games to become eligible for a postseason bowl game.

But he’s got other aspirations, namely paving the way for younger teammates — those future generations of UNLV players — to become future leaders in the program. Kreitler set the tone for Garcia and others, and Garcia is intent on returning the favor.

“I hate to see talent wasted. I want those young guys to reach their full potential,” said Garcia, a sixth-year guard and the team’s unquestioned leader.

Garcia, 24, grew up attending UNLV games with youth football teammates, many of whom desired to play for programs such as Ohio State or USC. It’s just Garcia, who is affectionately called “Chato”, Spanish for annoying, had other plans.

“This is my dream school. I committed when I was a (high school) junior because this is the only team is wanted to play for,” Garcia said.

When Garcia says he loves UNLV, that’s not limited to the football program. He’s frequently spotted — hard to miss, actually, at 6-foot-3, 330 pounds, and with a thick black beard — in the crowd at the university’s other sporting events, especially women’s soccer.

And when a new player arrives in the football program or a recruit comes to visit, they are instructed to go meet Garcia. When the team is lagging at practice, coaches rely on him to bring energy to the huddle. Most important: It’s something that comes naturally, without being prompted by a coach.

“You can scream and yell as loud as you want, but if you don’t do things right, and people can see that, you aren’t going to have many of the right followers. His leadership and influence with this football team, his work ethic, his identity, his character — those are the things leading the way for us.”

When it comes to outreach to the Las Vegas community, whether that’s reading at a grade school or distributing water bottles on a hot day to UNLV students, Garcia is usually the first call for university officials. That’s because when it comes to helping Las Vegas, he will never say no.

Thaddeus Thatcher, 7, is held up by players Julio Garcia and Jaron Caldwell at Bishop Gorman High School Wednesday, May 13, 2015. Thatcher, who has been diagnosed with Leukemia, became an honorary Gael for the day. Thatcher also learned he will learned he will be going to Walt Disney World, courtesy of Make-A-Wish Southern Nevada.

Garcia was introduced to community service while attending Bishop Gorman and said he quickly learned the value of putting a smile on someone’s else face. He’s carried that mentality to UNLV, where last month he was named to the Wuerffel Trophy watch list. The award is for players who inspire great service in the world and make a positive impact on the community.

Garcia, and many other seniors nationally, received an extra year of eligibility after the 2020 season was impacted by the pandemic. UNLV only played six games.

Garcia already had a degree in hotel administration and could have easily passed on the rare sixth year of eligibility to pursue NFL ambitions. But one more year of representing the university was too appealing to pass on.

Garcia has had many memorable moments over the years, but says beating instate rival UNR to close the 2019 season is at the top of the list. After all, there’s something about winning a heavily contested overtime game on the road that you never forget. His least favorite moment, of course, is losing to UNR.

He’ll get one more crack at UNR and having a winning season. It all starts with setting the tone against Eastern Washington.

“It all starts up front,” he said of the offensive linemen. “We have to make our presence felt and punish (the opposition) in the run game.”